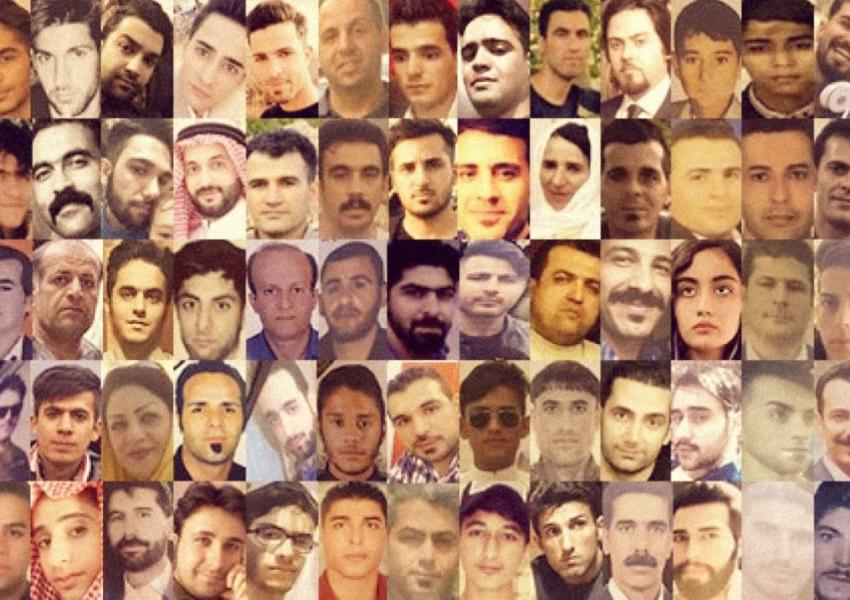 A collage of portraits of Iranian citizens murdered by the state. Source: https://iranintl.com/

The scale of the internet shutdown that started in Iran at midnight on November 15, 2019 marked a dark chapter in the country's history of censorship and bloody repression. The shutdown took place during the uprising sparked by the government's announcement of a sharp increase in petrol prices and which would result in the killing of as many as 1,500 protesters.

The internet shutdown was meant to halt the spread of information, as demonstrations in several cities very specifically targeted figures such as the Supreme Leader Ayatollah Khamenei, and President Hassan Rouhani. Initially only a partial disruption, the authorities then cut access entirely for four days, leaving Iranians without internet connectivity for a whole week before restoring access.

Confirmed: Internet access is being restored in #Iran after a weeklong internet shutdown amid widespread protests; real-time network data show national connectivity now up to 64% of normal levels as of shutdown hour 163 ??#IranProtests #Internet4Iran

Since the protests have abated, the authorities have continued to exercise their control over the internet, and there is no indication they will loosen their vice-like grip on online information control any time soon.

To understand how Iranian human rights and cyber activists deal with these challenges, Global Voices interviewed Azadeh Pourzadd, a leading human rights researcher and director of the Siamak Pourzand Foundation, and Mehdi Yahyanejad, a leading defender of internet freedom who co-founded the organization NetFreedom. Yahyanejad also co-founded Balatarin, a Persian-language social and political link-sharing website and launched the Toosheh project, a method to stream data files to Iran via satellite.

Global Voices: How did human rights groups and defenders learn about the ongoing repression in November when the Islamic Republic shut down the internet?

Azadeh Pourzand: Iran was not a haven for free flow of information prior to November 2019. Given the ongoing restrictions  on internet freedom in Iran, as well as the general surveillance of citizens and human rights advocates, human rights organizations outside Iran have long developed mechanisms of safe modes of human rights documentation, using the limited available internet through circumvention techniques. That said, when the internet was blocked in November even such limited contact was not possible. As a result, most human rights organizations received the footage and other documentation-related information with a delay of a few days, and they immediately began retroactive reporting. Also, dissident Persian media played an important role in widespread dissemination of footage received from Iran, and many of them became the source of information for various human rights documentation groups. Also, a few organizations set up phone numbers that those in-country could reach if they wanted to report on anything of their own free will.

GV: To what extent was Iran's attempt to block the country's internet during the protest movement in November successful?

Mehdi Yahyanejad: They were successful in disconnecting Iranians from the outside world. There were a few people who had access through their business servers or through some government ministries but majority of people were left without internet access. This helped the regime to cover up the massacre of the protestors. Hundreds of protestors were killed in a matter of three days and most of the world was not aware of what happened. The extent of killings became evident after the internet was established.

GV: How do you rate the performance of Iran's “intranet” (the Iranian government has also called it “national internet” or even “halal internet” from time to time) during the period when the country was deprived of internet access?

MY: The Iranian government has invested heavily for more than a decade in developing a national internet system that can work without a connection to outside world. In practice, a lot of services broke down. There were reports of hospitals not being able to process patients’ payments and people not being able to pay their bills online. Also, most Iranians are using messaging apps based outside of Iran such as WhatsApp, Telegram, and Facebook Messenger. Iranian government tried to use this opportunity to push messaging apps based in Iran. People didn’t welcome this move and didn’t switch to using the apps based in Iran because they do not trust them.

Pourzand: I am not an internet freedom expert. But as a civil society and human rights advocate doing research on available tools for advocacy, I have inferred that the “halal internet” serves as a control tool, as most Iran-developed websites and apps collect intelligence for the use of the Islamic Republic of Iran. Therefore, while it may have some use for absolutely apolitical uses, it does the opposite of serving as a mobilizing tool that connects citizens in the times of political upheavals, or a platform for them to express the grievances.

GV: What can be done to overcome the increasing control of the internet by the Iranian state?

Pourzand: We have to engage in continuous advocacy with various multilateral and UN mechanisms to increase pressure on the IRI regarding its violation of freedom of expression and internet freedom. But we also have to plan alternative ways of safely staying in contact in case of crisis. For instance, in terms of information dissemination, radios became important during the November protests. Therefore, while continuing to use available technology safely and responsibly for the purpose of advocacy, we have to also include low technology tools as mitigation tools for human rights violations documentation and advocacy in times of crisis, to make killing protestors and others more difficult to impossible for the Islamic Republic of Iran. We have to find ways not to allow them to get away with shooting people as they wish, detaining them and torturing them and calling them rebels or agents of enemy states.

Yahyanejad: We need more research and development of technologies that can work in an intranet or offline environment. Establishing connectivity while the internet infrastructure is down is a challenging problem and requires significant resources and talent. At the same time, we need to increase the cost of internet shutdowns for governments by condemning them internationally. Also, in the tech community, the actors in these internet shutdowns need to be isolated and not receive invitations to major conferences or platforms such as the International Telecommunications Union (ITU). The US government rightly put targeted sanctions on the Iranian ICT minister who was instrumental in the internet shutdown in November.