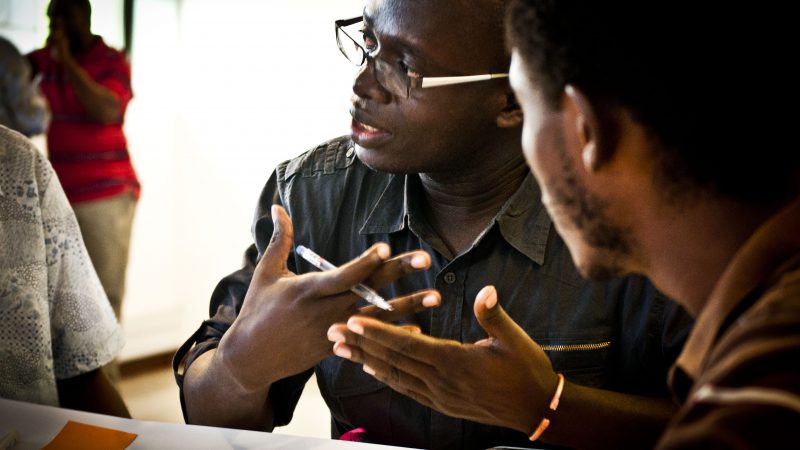 On February 24, 2020, Tanzanian freelance journalist Erick Kabendera was released from prison but faces hefty fines on charges of money laundering and tax evasion.

The beleaguered journalist entered into a plea bargain with the Kisutu Resident Magistrates Court in Dar es Salaam, Tanzania, after spending seven months behind bars, according to a report by BBC Swahili. During his time in prison, Kabendera was denied medical attention and was prevented from attending the funeral of his mother, who died while he languished in prison.

On July 29, 2019, six plainclothes policemen forcefully removed Kabendera from his home in Dar es Salaam, and took him into police custody. Police say Kabendera had failed to obey a summons to investigate the status of his Tanzanian citizenship. But authorities soon switched track and accused Kabendera of money laundering, tax evasion and organizing unspecific crimes. These types of financial crimes prevented him from the option of bail.

Between January to July 2019, Kabendera “knowingly furnished assistance in the conduct of affairs of a criminal racket, with intent either to reap profit or other benefit,” and during that time, he failed to pay his taxes on $75,000 USD worth of income, according to the original charge sheet, as described by Reuters.

As a journalist, Kabendera has been critical of Tanzanian President John Magufuli’s administration and has spoken out in favor of press freedom. Human rights activists saw Kabendera's arrest as a way to instill fear among journalists and others critical of the ruling party and current administration.

The day after his release, prominent writer and columnist Elise Eyakuze wrote a moving letter to Kabendera in The East African:

Erick, I pray that you are faring as well as you can. It was a shock of course to hear of your arrest on charges of money laundering, tax evasion, crime, but not entirely unexpected considering the difficult times that the media is facing. Freedom of speech has always been dangerous business, Tanzania being no exception. But we had our halcyon days, didn’t we?

No justice for Kabendera

Kabendera's family and supporters welcomed the news of his release, but the fact that he had to pay a hefty fine for his freedom and plead guilty on these economic crimes charges was a major disappointment. Many have expressed their concern on social media how his case was handled.

“While it is welcome news that Kabendera is out of prison close to seven months later, it is outrageous that he had to pay such a hefty fine to gain his freedom.”

The organized crime charge was dropped, but Kabendera was convicted on tax evasion and money laundering charges and he was fined a total of 273 million Tanzanian shillings ($118,000 United States dollars), according to The Citizen.

We welcome the end of Erick Kabendera’s nearly seven-month imprisonment on charges that were transparent retaliation for his critical journalism. … However, we are deeply concerned that even after months in detention without the prospect of bail, during which he suffered illness and lost his mother, Kabendera’s ordeal is not yet over as these cripplingly heavy fines continue to hang over his head.

Kabendera already paid some of these fines, but the remaining tax evasion compensation must be paid over a six-month period, according the BBC and a statement from Tanzania Human Rights Defenders Coalition.

Netizens on Twitter sounded the alarm on the conditions of Kabendera's release.

Opposition politician Zitto Kabwe, Leader of Alliance for Change and Transparency (ACT Wazalendo),  met with Kabendera at his home in Dar es Salaam, hours after his release and tweeted:

Great to meet and hug Erick Kabendera @kabsjourno at home. So sad that my friend will live, at least momentarily, with a criminal records for crimes he didn’t commit. The extortionist state under @MagufuliJP really wanted to break this honest man. His crime? Journalism #Tanzania pic.twitter.com/GRJi85bOsk

I still firmly believe the charges against Erick Kabendera are 100% false, he has been forced to buy his freedom out!!

Renowned human rights activist Boniface Mwangi of Kenya lashed out at the Magufuli administration on Twitter over the Kabendera case using the Swahili language hashtag #UhaiNaHakiTanzania, which means “life and rights Tanzania”:

Erick Kabendera was jailed illegally and blackmailed to sign a plea bargain. @MagufuliJP is a dictator and Tanzania is slowly becoming a police state. Magufuli is a polished version of Idi Amin, Moi and Kagame. #UhaiNaHakiTanzania https://t.co/pyd2yYkZr2

No matter how much hatred you spew against Tanzanians, Erick Kabendera will forever be a convicted felon!

While Kabendera walks free, there are still other human rights activists and journalists who are in jail or remain missing.

Journalist Azory Gwanda, who was investigating high-profile killings in the Rufiji area, went missing in November 2017. In July 2019, Tanzanian foreign minister Palamagamba Kabudi announced during a BBC interview that Gwanda was dead, sparking demands for a full investigation into the circumstances of his mysterious disappearance and alleged death. But through a government spokesman, Kabudi later denied that the journalist was dead.

Human rights activists Tito Magoti and Theodory Giyani, who were both detained in December 2019, remain behind bars on accusations of financial crimes. The courts adjourned their case for the fifth time, according to the Legal and Human Rights Center, where Magoti worked as a program officer.

Human Rights Watch has called Magoti and Giyani's arrests troubling, especially in the months leading up to the presidential elections in October:

These arrests come as Tanzania’s human rights record continues to deteriorate under President John Magufuli. Since 2015, the government has cracked down on civil society by passing repressive laws, censoring media, and arresting government critics, including journalists and several opposition politicians.

Last year, police arrested Erick Kabendera, who had written for several international outlets critiquing Tanzanian politics. Like Magoti, he was also charged with non-bailable offenses of economic crimes, and has been in detention since last July awaiting trial. If Kabendera’s case is any indication, Magoti could also face several months awaiting trial.

These arrests are especially troubling as Tanzania gears up for general elections later this year. Rather than stifling dissent, the government should be allowing healthy debate and upholding the freedom of expression, which is guaranteed in its own constitution.