IP Converge and Suniway faced a lawsuit over DDoS attacks 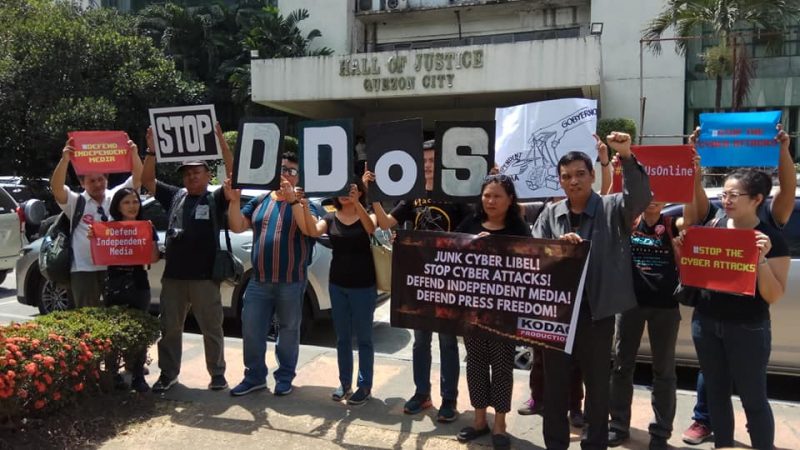 Members of Altermidya and other media groups during the filing of a civil case against tech companies accused of cyber attacks. Source: Facebook

Several Philippine media groups settled a case with tech companies accused of providing infrastructure for cyberattacks. The companies have signed an agreement that includes a pledge to protect press freedom.

In December 2018, independent news websites Bulatlat, Altermidya, Kodao, and Pinoy Weekly reported that they were targeted with distributed denial of service attacks (DDoS). They accused state-backed groups of initiating the attacks which they claimed were meant to intimidate and silence media groups. They linked the shutting down of their websites as a result of these attacks with the decline of press freedom under the government of Rodrigo Duterte who became president in 2016.

Qurium, a Sweden-based media foundation, helped in stopping the DDoS and identifying tech companies IP Converge and Suniway as the source of the cyber attacks. IP Converge is a Philippines-based Cloud Services Provider, while Suniway Group of Companies Incorporated, registered both in Hong Kong and the Philippines, provides “network support to Chinese and Filipino companies in the Philippines.’’

In March 2019, a civil case was filed by the beleaguered news websites against IP Converge and Suniway.

National Union of Journalists of the Philippines supported the filing of the suit:

The companies refuted the allegations and filed a countersuit against their accusers for besmirching their reputation.

During the pre-trial conference in September, IP Converge admitted that it leased 64 IP addresses to Suniway, which were earlier traced by Quirium as the source of the attacks.

In February 2020, the case was settled with all parties expressing commitment to protect press freedom. Here’s an excerpt from their joint statement issued on 24 February:

[The parties] express their utmost respect and full support of press freedom as a constitutional guarantee and a tenet of a democratic society.

…..defendants commit to support a free press. Effective mechanisms to combat such attacks shall further be improved to prevent a repeat of this kind of situation.

Bulatlat issued a statement describing the outcome as a victory for press freedom:

This is a small victory in our fight for press freedom. We call on all tech companies not to allow their infrastructure to be used by enemies of the truth.

We will remain vigilant in countering cyber attacks and other forms of violations to our right to publish news and analyses relevant to the Filipino people.

In an interview with Global Voices, Butlatlat editor Ronalyn Olea mentioned the relevance of the case in the campaign against media-related cyber attacks.

The civil case filed by alternative media groups is the first case filed in relation to cyber attacks against the media. The parties to the case have pledged commitment to uphold press freedom and ensure mechanisms to prevent their infrastructure from being used by enemies of the truth. This also serves as a warning to cyber attackers that they cannot hide behind their VPNs forever.

Olea added that they have legal remedies to ensure compliance in preventing cyber attacks:

The joint agreement is a binding agreement and we have submitted it to the court handling our case. It does not tie our hands from filing future cases if similar incidents happen again.

“The filing of the civil case is just one aspect of the campaign,’’ Olea said, before adding:

The overwhelming support from press freedom watchdogs, digital rights advocates, fellow journalists, among others greatly helped in our campaign to uphold our right to publish