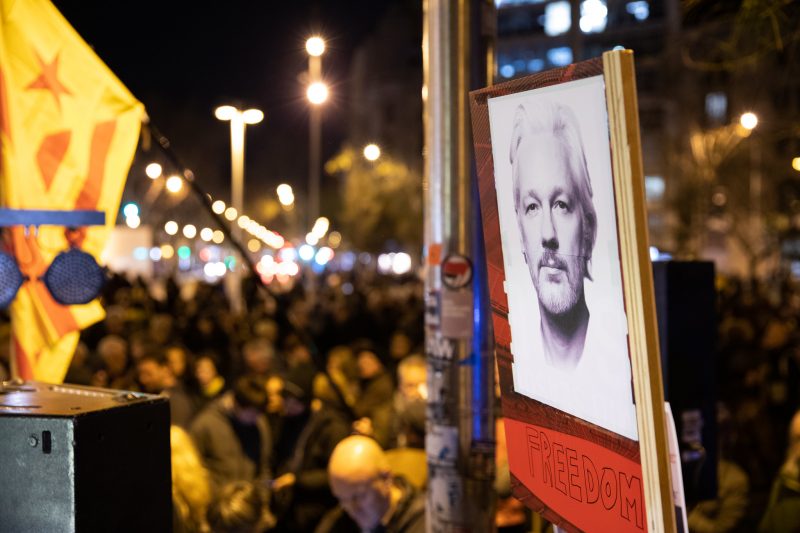 Wikileaks’ founder Julian Assange’s hearing for extradition to the United States on February 24, 2020 led many people, both on the streets and online, to rally support for his release. Twitter user Bean summed up the attitude of many people across the globe:

Don’t be fooled: Julian Assange is a journalist, not a hacker, and the US wants to make his work—national security journalism—a crime. #DontExtraditeAssange #AssangeCase pic.twitter.com/bnnoDrqmeh

1200 journals from 98 countries: We urge all journos to speak up in defense of J Assange at this critical time. Dangerous times call for fearless journalism.#JournalistsSpeakUpForAssange.

It is nearly eight years since Assange sought asylum in the Ecuadorian embassy in London, and a year since his imprisonment in the United Kingdom’s Belmarsh Prison for breaching bail.

In 2006 he launched the Wikileaks website, which has published leaked and classified information from the U.S. government and other sources. Major instances include the Afghanistan and Iraq War Logs, and Cablegate. Assange collaborated with US Army whistleblower Chelsea Manning on these leaks.The extradition case relates to indictments for conspiracy to commit computer intrusion and espionage. Assange faces up to 175 years imprisonment if convicted of all charges. He has been accused by the American government of putting lives at risk.

Assange is a controversial figure for a number of other reasons. In 2010, Sweden issued an international arrest warrant for him in relation to sexual assault allegations; the charge has now expired. In 2016, the publication of Hillary Clinton’s private email archive blotted his copybook in the eyes of many progressives, who accused him of doing Russian President Putin’s dirty work and of helping to elect Donald Trump. Assange denies these accusations.

But many netizens dismiss attacks on Assange and Wikileaks. Some believe that what is paramount are the principles involved, not Assange’s character:

“Everyone has a view on Assange. But, frankly, our views should be irrelevant. We, the public, are not in the know. We’re easily manipulated. We can be wrong.” #FreeAssange #DontExtraditeAssange #auspol https://t.co/QGVr2YBuE9

Others refuse to support him for a range of reasons:

Assange deserves no respect, he lost it when he helped Trump get elected.

Assange is no Saint. He's put lives at risk with his actions. Due process is important, 100%, but let's not ignore the bad shit wikileaks has done putting entire families at risk in places like Iraq. Unforgivable.

@DaveSharma This is not an either/or proposition. #Assange must be supported as must other Australians detained overseas @AssangeCampaign Imprisoned academic deserves more sympathy than Assange, Sharma says https://t.co/SdF9rZATHW

There is a small group of pro-Assange members in Australia’s federal parliament. Opposition backbencher Julian Hill backed the ‘other Julian’ in a House of Representatives speech:

They imprison and torture Julian Assange to silence him. I spoke up for his rights today … and the lights in Parliament literally go out…💡 pic.twitter.com/5T2zehSarU

There has been a worldwide resurgence of protest meetings and demonstrations. New Zealand academic Alex Hill is an activist who coordinates Candles4Assange:

Catalan separatists, Assemblea Nacional Catalana, posted the photo at the top of the story on Flickr. It depits a protest in Barcelona on February 24. Part of the caption reads: “L’Assange va donar suport a l’autodeterminació de Catalunya: ara som nosaltres qui li’n donem!” (“Assange supported the self-determination of Catalonia: now we give it to you!”).

Guatemalan lawyer Renata Avila (a member of the Global Voices community) reported from the fourth day of the hearing about the latest issue involving Assange’s treatment in the judicial system:

Summary of #Assange extradition case today: the accused cannot “hear” the arguments and the Judge refuses to fix it: he just wants to sit next to his lawyers. Globally reasonable. She refused. She even threatened to extend the process. Due process? Or punishment by process?

This follows earlier claims by the UN Special Rapporteur on Torture, Nils Melzer, that Assange “has been tortured & continues to be tortured” in Belmarsh Prison.

There are numerous Facebook pages such as Free Julian Assange and tens of thousands of Instagram posts petitioning for his release.

Meanwhile, Chelsea Manning was reported to have attempted suicide in the US prison where she is being held, after refusing to answer questions before a grand jury about Assange:

This is devastating news. Chelsea Manning should be freed immediately! #FreeChelseaManning #FreeAssangeNOW https://t.co/P2c8QWghPa

In a later development, a court has ordered her release as the grand jury has been disbanded. Wikileaks has responded:

The WikiLeaks Grand Jury running 10+ years has been disbanded. Chelsea Manning and Jeremy Hammond have been released from its coercive machinations. Now drop all charges against #julianassange and release him. pic.twitter.com/qoHuUvvFcg

The radio broadcaster and media personality of the same name is also in Assange’s corner urging everyone to do more:

In The Weekend Australian Magazine today by @PhillipAdams_1

“It is we who are guilty of treason, treason against our principles. Not Julian Assange “#FreeAssangeNOW #DontExtraditeAssange pic.twitter.com/zRjxPtBqSA

The extradition hearing resumes in May.