The term 'zouave' is used to tar Amazigh activists 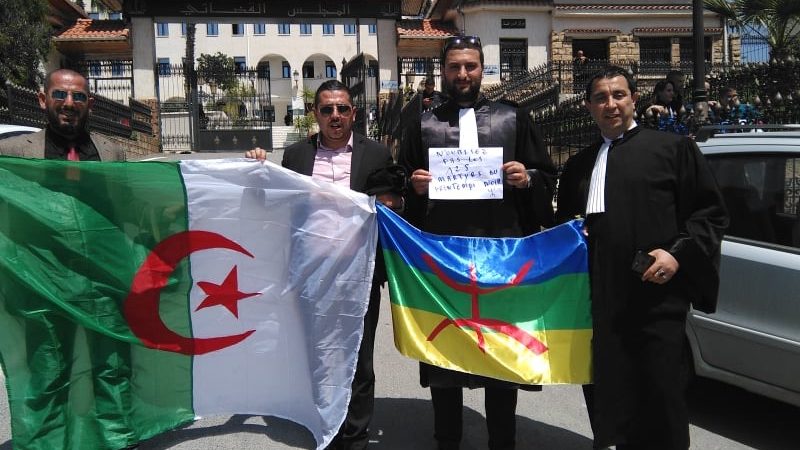 Protesters stand with the Algerian flag and an Amazigh flag in Tizi Ouzou, Algeria. Photo by Kader Houali, used with permission.

One Friday morning in late summer 2019, a lone woman marched through the center of Algiers, walked in front of a row of policemen and loudly called for the deposition of now-deceased army general Ahmed Gaid Salah, — hours ahead of the main anti-government march that afternoon. 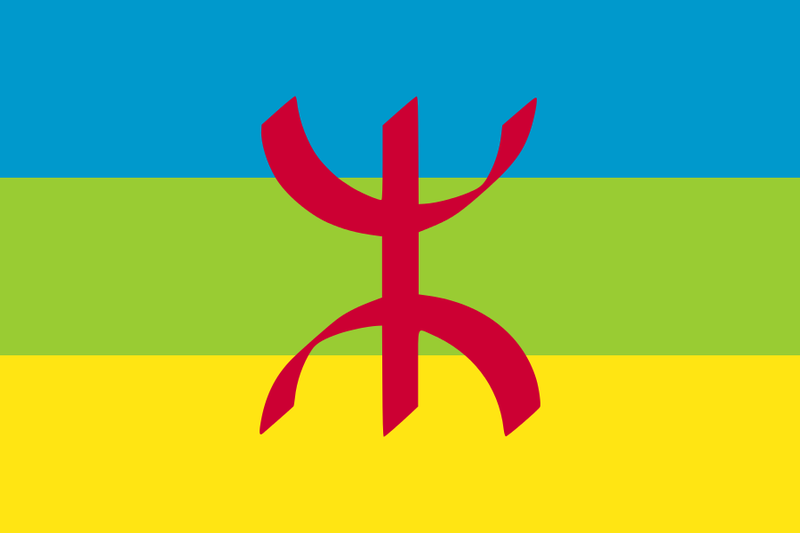 The Amazigh flag was outlawed in Algeria in June 2019.

Earlier that summer, in June 2019, Gaid outlawed the Amazigh flag that belongs to the Kabyle Berbers, or Amazigh people. Following this decree, dozens of protesters were arrested for brandishing it alongside the national flag during Hirak protests, the popular uprising that erupted in February 2019 in opposition to then-president Abdelaziz Bouteflika running for a fifth term.

“This woman braved two things: In the morning, there are more arrests and it is unimaginable to speak about Gaid,” said Meziane Abane, a journalist who captured the woman on film. He uploaded the video to the Facebook page of his news website, L'Avant-Garde Algérie (Algerian authorities recently blocked the website).

Moments later, insults started pouring in. Comments like “you are the residue of France,” “France is your mother,” and “son of France” flooded the comments section. In one day, the video had 1 million views and up to 4 million comments.

Those from the Kabyles region are often associated with France, Algeria's former colonial power. Online trolls use slurs to target and accuse those from Kabyles of being separatists that threaten “national unity.”

Abane himself is from the town of Bouïra in Kabylie, a mountainous region bordering the Mediterranean Sea and home to the Amazigh people. The comments — while rooted in a political battle — specifically target Kabyle activists with racist overtones.

The Kabylie region has been central to the Hirak movement. After Bouteflika stepped down in April, the movement continued to protest every Tuesday and Friday to demand an overhaul of the system (up until March when it “paused” for public health reasons due to COVID-19).

In December, Hirak activists boycotted the national elections. About 40 percent of the population voted nationally while parts of Kabylie saw a near 100 percent abstention rate.

Racism directed at Kabyle activists and citizens is not new, but the strength of this rhetoric intensified in 2019, according to Abane.

The history of the ‘zouave’ slur 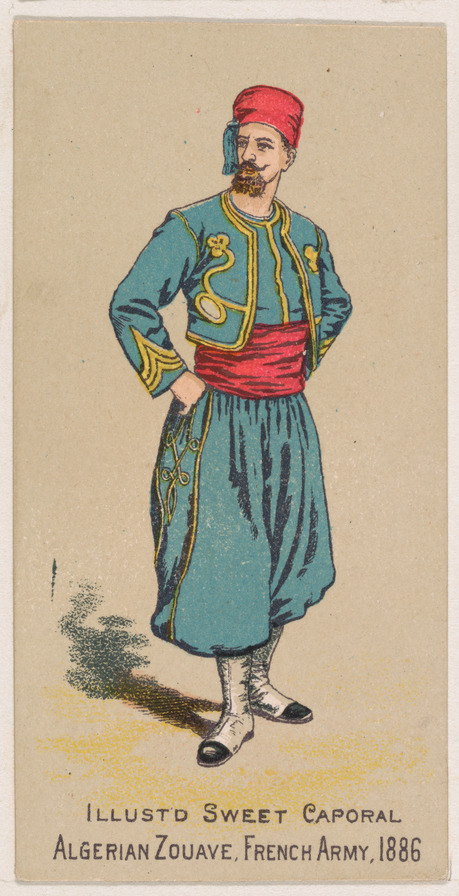 Algerian journalist Khaled Drareni who covered the Hirak protests was sentenced to eight months in prison in April on charges of incitement and “attacking national unity.” He told Global Voices in an interview last year that his coverage of the Hirak attracted “copy-paste” comments accusing him of working for France, being paid by the French, and calling him a zouave.

The word zouave refers to a group of Algerian men from Kabylie who were hired by France during its occupation of Algeria, to be part of a light infantry unit working for the French army from 1830, said Ouissal Harize, a PhD student at Durham University, who researches violence as a colonial legacy in Algeria.

There are conflicting accounts of the term’s etymological origins. Harize traced it back to the Kabyle word izouf which means “to throw.” But he says the term could also come from an Arab mispronunciation of agawaw — the name of a confederation of Kabyle tribes.

By the 1860s, other armies also named their infantry regiments zouave. European painters such as Vincent Van Gogh chose the zouave as a popular portrait subject, she added.

While the presence of Kabyles in the French army is indeed verifiable, “the term is now being used by some to target and tarnish all Kabyles and so it is now being used as a means of racialization,” Harize explained.

“It is an ideological battle” between Arab nationalists and Amazigh movements, explained Nacer Djabi, a professor of sociology at the University of Algiers:

The Arab nationalists call people from Kabylie zouaves to say that they were with colonisation at the start, [in order] to create a complex for the Kabyle people who present themselves as great revolutionaries during the war for independence. It is a manipulation of national history for contemporary politics.

Today, trolls take this historical discourse around the meaning and definition of zouave and create a conspiracy that the Hirak movement “is directed by a Franco-Berber secular elite, which is trying to surf the movement,” said Redouane Boudjema, media and communications professor at the University of Algiers.

Boudjema said that false information has been diffused about important historical Kabyle figures, such as Hocine Aït Ahmed, a commander of the first guerrillas to fight colonial rule and part of the post-independence provisional government before he resigned and created Algeria’s first opposition party.

Fake news about Algerian history is used to feed a hateful, toxic discourse against a region [Kabylie], which was always at the vanguard of the struggle for democratic transition.

Over the last year, the current regime has instrumentalized this anti-Kabyle discourse to try to weaken the Hirak movement.

“Amazigh-ness” is recognized as one of the fundamental components of Algerian identity in the constitution and the authorities have taken steps in recent years to integrate Amazigh culture: Tamazight was established as an official language in 2016 and the first month of the Amazigh year — yannayer — was designated as a public holiday in 2018.

Despite this, in June 2019 as the Hirak protesters marched, Gaid cracked down on Amazigh expressions by outlawing their flag and arresting those who waved it. 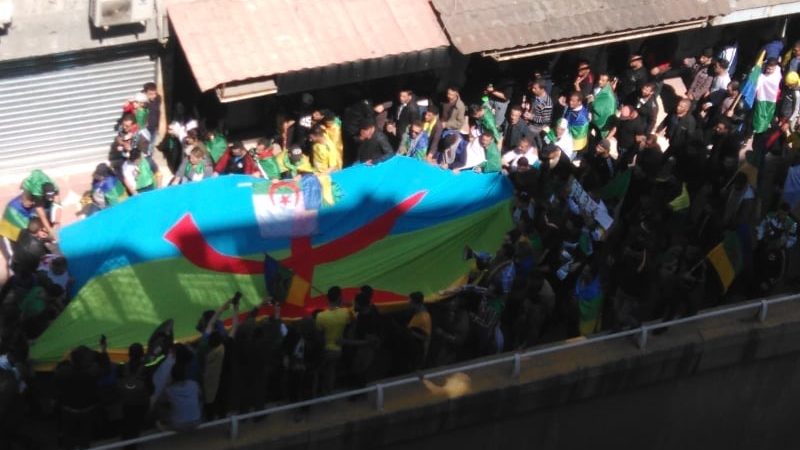 “The discrimination of Kabylie existed well before February 22, and it was on an institutional level,” said Kader Houali, a lawyer and human rights activist from Tizi Ouzou in Kabylie, pointing out how long it took after independence for the language to be recognized. But he added that this type of discrimination exists in society, as well as in the system, and is fanned by certain public figures and journalists.

Houali, along with two other lawyers, filed a complaint against Naima Salhi, president of the Parti de l’équité et de la proclamation (PEP), for “inciting racial hatred and calling for the murder of Kabyle citizens.” She is one of a number of politicians and journalists that “attack everything that is different [non-Arab and non-Islamic],” he said.

Salhi uses her political party’s Facebook page to share video appeals for citizens “to marginalize Kabyles and execute what they call zouaves and ‘the community of the devil,’ it is a call for death and violence,” said Houali. Young bloggers post similar appeals, he said.

In one video published in late 2019, Salhi said that Kabyles are not Algerians but rather “immigrants” descended from the Vandal people. In the video, she called it a shame for “Algerians to let these dogs do what they like.”

In another video, recorded just after the death of Salah on December 23, 2019, Salhi warned: “Beware of this dangerous group and this flag.”

In a series of derogatory comments, she addressed Kabyles as Jews and said, “that is why we don’t get on with you.” She also referred to the outlawed Amazigh flag as a “zouave flag.”

While there is no official law that outlaws racial or regional discrimination, Houali hopes that they may be able to apply the section of the Penal Code that outlaws “threats to national unity” — ironically, the same law used to arrest protesters for waving the Amazigh flag.

Abane thinks that the anti-zouave campaign has managed to demobilize some of the Hirak protesters. “This is the refusal of other; It is primarily racism — they are targeting people from Kabylie and there is no action, neither from Facebook nor from the Algerian judicial system,” he said.

For now, all he can do is filter the repeated slurs from his Facebook page, but that hasn't stopped the trolls — they get around it by adding a single letter to flood him with comments that call him azouave instead.