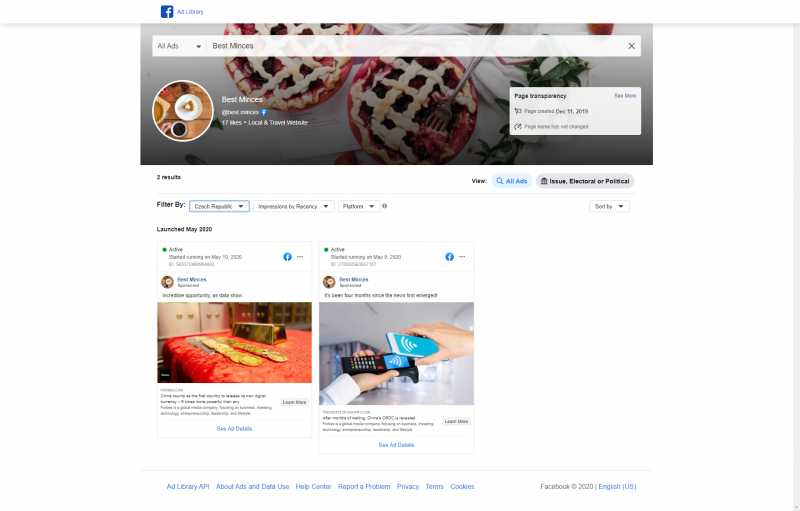 This story is based on reporting by Global Voices’ content partner Meta.mk News Agency, a project of Metamorphosis Foundation.

Its monitoring of social networks has revealed that scammers continue to use Facebook advertisements masked as links to articles from the respectable Forbes.com, continuing disinformation trends involving not only China, but also European Union members like Sweden. 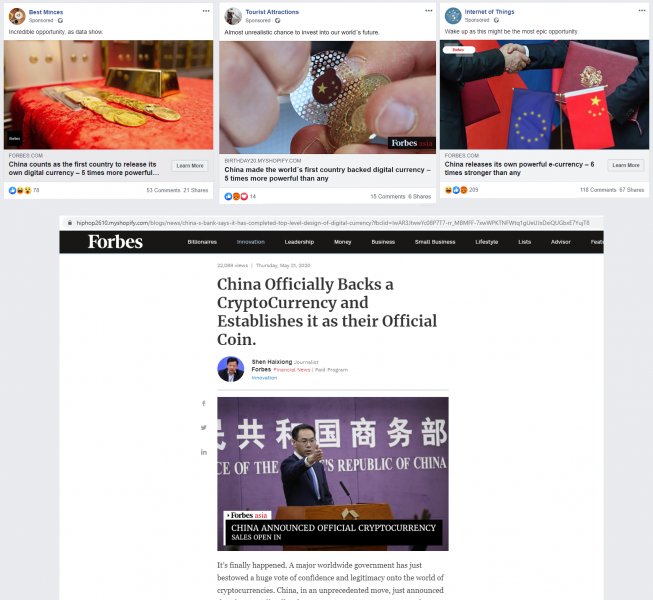 Sample of the Facebook ads promoting a fake Forbes.com article, actually leading to website run by scammers. Photo by Meta.mk.

On May 19, the Ministry of Interior Affairs of North Macedonia warned citizens that scammers use social networks and e-mail to distribute links misrepresented as articles from Forbes.com to promote the purchase of a supposed new Chinese cryptocurrency.

Citizens who click on the links and provide personal data to the scammers are then targeted by phone calls persuading them to start ‘investing’ by paying instalments of $250 dollars.

Other manipulation techniques are then deployed to make users increase the fee.

The anti cyber-crime unit of the Macedonian police claimed the malicious links lead to a website hosted in Ukraine, allegedly run by a Russian citizen in a manner similar to the debunked OneCoin Ponzi scheme run by Bulgarian fraudster Ruja Ignatova, which inflicted damage worldwide of over $4 billion.

Data publicly provided by Facebook about the geographic reach of the advertisements promoting these links suggest they go far beyond the borders of North Macedonia, activists warn.

Metamorphosis identified several similar ads that are active on social networks. Users who click on these ads are redirected to addresses such as https://fishing2510.myshopify.com/blogs/news/dollar-faces-the-threat-of-being-displaced-by-chinadigital-currency?fbclid=IwAR3x_uvBatgzsr_wLZtDF1z5A1L7cb5F-T_-kefu36mP7n2I4dPk4jzf8N4 instead of pages on the Forbes.com website.

Misleading advertisements continue to target social network users across the world. Using the public data provided by Facebook about the ads targeting the audience based in North Macedonia as a starting point, the Metamorphosis team revealed that the same ads are served in almost all European countries, as well as countries in the Middle East. Scammers use pages about culture, even about cookies, to launch ads that lead the users to web pages and blogs that look almost the same as the ones the Macedonian police warned about.

Metamorphosis, a member of the European Digital Rights – EDRI network, has been working on promoting human rights online, including child safety online since its founding in 2004.

A very worrisome development is that these organized crime networks also use pages aimed at children and teenagers to camouflage their malicious content. For instance a page branded as community for the popular game MineCraft (titled Minecravt) had been running ads that continue to disseminate disinformation about Sweden, aimed at users in Russia, Austria, Belgium, but also in Singapore, Qatar and United Arab Emirates, and dozens of other countries. 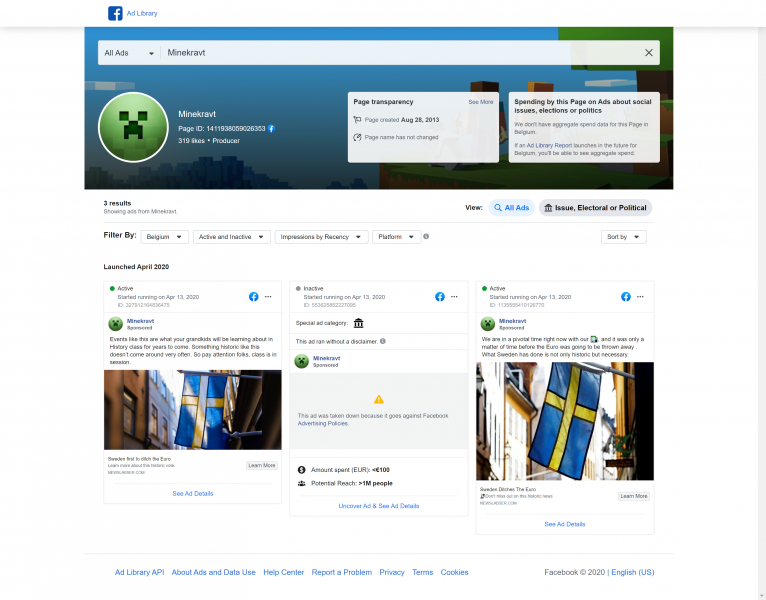 Facebook transparency tools reveal that a MineCraft themed page is used as platform for ads by scammers.

Users clicking on these ads are taken to a page providing an incentive for them to leave their personal data. In the case of Sweden this was disguised as a discount coupon. 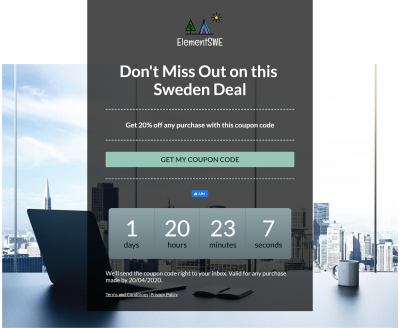 While MineCraft has a huge adult following, it is a particularly popular game among children aged between 9 and 11. This practice helps condition future audiences particularly susceptible to both disinformation and scamming. 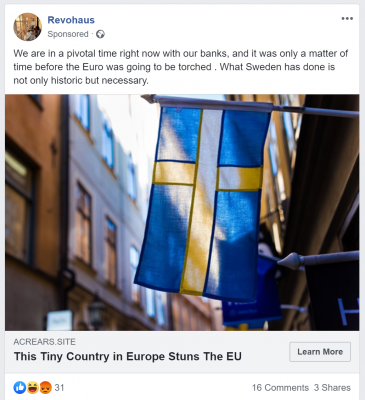 Facebook ad from November 2019 promoting a scam page and amplifying disinformation about Sweden and the EU.

Sponsored Facebook posts lure people who had been previously primed, through right-wing populist propaganda media networks based in North Macedonia, to believe media manipulations about unrest in the country and the European Union (EU), originally published by pro-Kremlin media.

In the same manner, these articles promoted fake news that Sweden has introduced a cryptocurrency opposing the Euro.

To launch these geo-targeted ads, scammers used series of pages with general interest topics, including some branded as unofficial fan clubs of Western celebrities like actors Liam Neeson and Anthony Michael Hall.

CriThink, which is an initiative supported by the EU Delegation in North Macedonia, educated local social media users on how to use the transparency features of Facebook pages used by the scammers, in order to flag and report the suspicious pages using the mechanisms provided by the platform.

In order to boost citizen engagement in raising media literacy levels, CriThink articles related to social networks provide instructions on how users can use reporting features to alert administrators about harmful content, ranging from hate speech to scams. 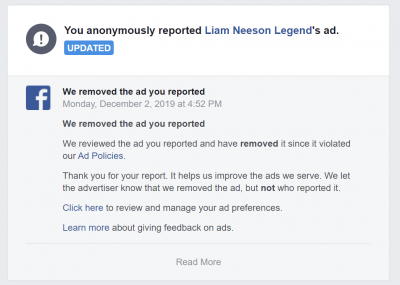 Notification from Facebook about removal of ads by scam pages targeting users in North Macedonia.

Several weeks later, in December 2019, Facebook informed some of its users who participated in the online action that they had removed the ads reported as scams.

Since Forbes magazine enjoys a good reputation as a source of credible business information, it has also become the subject of various media manipulations in North Macedonia.

The government that ruled the country from 2006 to 2017 used taxpayers’ money to publish advertisements or sponsored content in Forbes magazine and other Western media.

These articles mainly concerned the advantages offered by the country to foreign investors.

However, the pieces also had a domestic propaganda use. The media close to the populist ruling party misrepresented the paid-for-content as articles written by economic experts or Forbes staff praising the economic policies of the then-government.

This media swindle was repeated periodically, and was debunked several times in2014 by the Media Fact-Checking Service, established by Metamorphosis with USAID support.