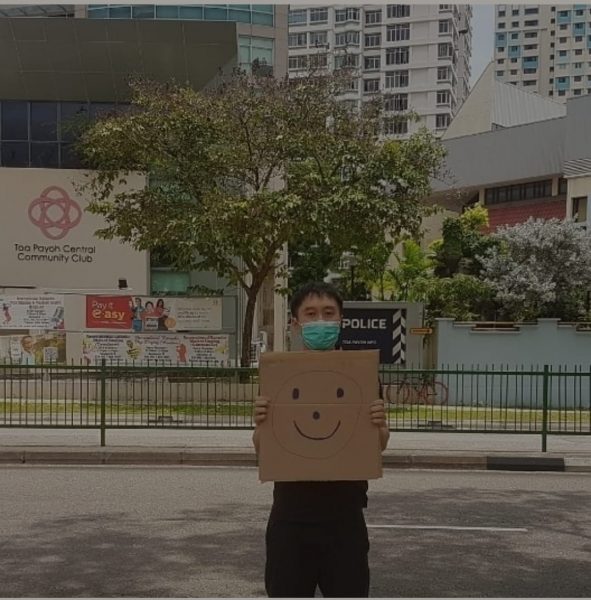 Jolovan Wham standing in front of a police station while holding a ‘smiley’ placard. Source: Facebook

Activist Jolovan Wham was charged with illegal assembly on November 23 for holding a “smiley” placard in front of a police station on March 28.

Wham staged the stand-alone protest in solidarity with two young climate activists who each held a placard calling attention to Singapore’s role in abetting the climate crisis. One of them stood in front of Exxon Mobil’s office on March 13 with a placard that has these words: “planet over profit”, “school strike 4 climate”, and “ExonMobil kills kittens & puppies”. The other young activist held a solo protest in front of a police station on March 22 with a placard that reads “SG is better than oil”.

The police summoned the two young activists, confiscated their phones, and placed them under investigation.

Wham was also investigated after his solo protest.

In response, Wham launched the #smileinsolidarity campaign to highlight the curtailment of free speech in Singapore. He explained the theme of the campaign:

I wanted to come up with a way for people to participate in this discussion about civil liberties through a fun, clever and non-aggressive way.

It was only in November that the police announced the filing of charges against Wham. He reported this on Facebook:

I was there solely to take photos for the purpose of uploading them on social media. I barely stayed in the area for more than several seconds. Yet, what I did has been deemed as a public protest by the State.

I barely stayed in the area for more than several seconds. Yet, what I did has been deemed as a public protest by the State. #FreedomOfExpression #freedomofassembly pic.twitter.com/WBXx8x5ZK4

News about the filing of a case against Wham has revived an online petition calling for the review of the Public Order Act. Under the law, protests without a police permit are only allowed at the Speaker’s Corner park. Public assemblies outside this park require police permission. But the petitioners claim the law provides a broad definition of “public assembly”:

The definition of ‘public assembly’ in the law is so broad that one individual handing out flyers on the street or collecting signatures for a petition, will be deemed to have committed an offence if they did not have a permit to do so.

Our ability to advocate for change and speak up against injustice are severely restricted by regulations which do not allow us to assemble freely outside of Speaker's Corner. We must have the right to do so even if such acts are uncomfortable to those in power. This is how a democratic society functions and citizens should not be punished for speaking their truths.

Reacting to global news reports about Wham’s case, the Singapore High Commission in Canberra sent a statement to ABC Australia’s radio show explaining the government’s stance on the matter:

If protests or demonstrations are allowed all across Singapore, we will have to consider how business interests, and ordinary Singaporeans, among others, would be affected, having observed how disruptive and destabilising protests elsewhere have been. It is also not possible to determine what size a protest would or would not hurt public order. Even a one man protest can cause some disruption to public order, or can escalate.

It is a bad sign when law enforcement is overbearing to the point that it invites ridicule, the criminalisation of displaying an emoji being a case in point, all to prevent a protest precedent being set. It’s tragic that Singapore's leaders have so little faith in their people to responsibly exercise the same basic civil liberties that citizens of countries with similar development and income levels enjoy. And it’s plainly dishonest how the government cherry picks unrest stories from abroad to argue the necessity of rights constraints.

Human rights groups have expressed support to Wham. Amnesty International has called on the Singapore government to immediately drop its “absurd case” against Wham:

The charges are emblematic of how restrictive laws such as the Public Order Act are routinely used as tools for intimidation, harassment and political repression by the Singaporean government.

This is not the first time that Wham has faced prosecution for his activism. He was charged in 2017 for organizing an illegal assembly in relation to an indoor forum featuring Hong Kong youth leader Joshua Wong who spoke via Skype.