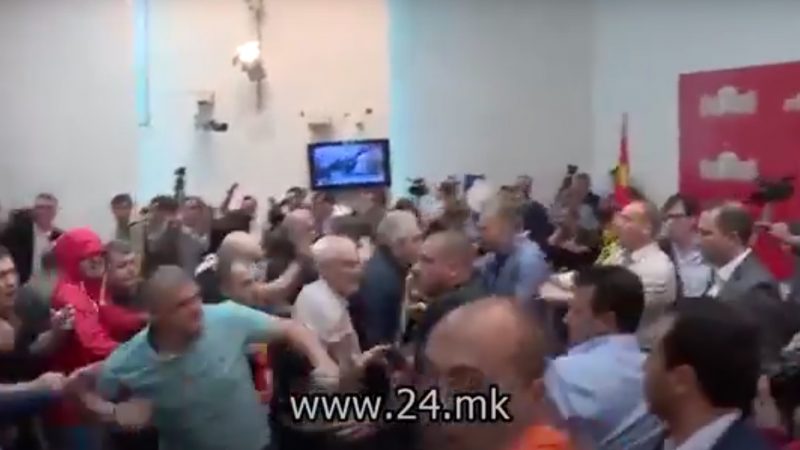 A mob of 200 VMRO-DPMNE supporters stormed the Macedonian Parliament on April 27, 2017. Screengrab from TV 24 Vesti.

This story is partly based on reporting by Global Voices content partner Meta.mk News Agency, a project of Metamorphosis Foundation.

A Skopje court rejected on December 10 a lawsuit filed by three journalists against the Macedonian state in relation to the 2017 mob attack of the Macedonian Parliament, citing a “lack of evidence” that “public protests took place in front of the Parliament that day.”

On April 27, 2017, around 200 supporters of the then-ruling party VMRO-DPMNE stormed the Macedonian Parliament after the party failed to form a government. The mob included masked men armed with batons, who attacked opposition politicians and journalists. The event was widely condemned internationally at that time and is known in Macedonia today as “Bloody Thursday.”

Sixteen people, among them senior members of VMRO-DPMNE, have since been convicted to a total of 211 years in prison for organizing or inciting the attack. However, an amnesty law passed in December 2018 acquitted most of the participants.

The three journalists who filed the lawsuit – Nataša Stojanovska, Dušica Mrgja and Goran Trpenoski – were at Parliament that day. They seek financial compensation for non-pecuniary damages.

According to a 2017 report by the United States’ state department, “21 journalists were threatened or barred from reporting, and six journalists were beaten while covering a demonstration that later resulted in the storming of the parliament building on April 27.”

The December 10 court ruling came as a shock not only to the plaintiffs but the wider journalist community and Macedonian civil society.

According to the Association of Journalists of Macedonia, who is the legal representative of the three journalists in the case, video recordings of the incidents on April 27 were provided in the court proceedings; those videos are also public, widely accessible online.

On a statement, the Association condemned what it called a “shameful verdict”:

The fact that the court refuses to recognize the violation of the right to freedom of expression and demands the journalists to prove widely known facts — that the raid on the Parliament was carried out by those who were at the public demonstrations — is biased and represents a precedent in the context of the case.

Next time the politicians decide to kill each other, maybe the journalists should just act as silent observers, because the judges in this country refuse lawsuits related to April 27, with the justification that the court didn't know that a terrorist activity and public demonstration were going on outside.

Do you realize that if we, the journalists, were not there risking our lives to report, the events could have turned out very differently?!

Is this be the face of justice? Such verdicts bring shame to the state!

No, they won't change our minds or drive us away from professional reporting, or from protecting the integrity of our profession and our personal integrity.

Whether the same can be said of the judges and the politicians, you are left to decide.

The 2012 events to which Stojanovska refers were the violent protests that took place outside Parliament on December 24, when the police also forcibly expelled several journalists and opposition MPs from the building.

A group of journalists sued the Macedonian state at the European Court of Human Rights (EUCH), which in February 2017 ruled in favor of the plaintiffs, ordering the government to compensate them with a sum of 5,000 euros each for non-pecuniary damages. However, nobody has been criminally prosecuted for the incident.

‘Everyone who participated in the attack must be punished’

“As the darkest day in Macedonian history, April 27 has become synonymous with political trade-offs, scandalous amnesty and incomplete justice,” Dusica Mrgja, one of the plaintiffs, told Meta.mk in June 2020.

Mrgja is a reporter with TV 24 Vesti; she says it was because of the live crews reporting the event that the incident ended without fatal victims. 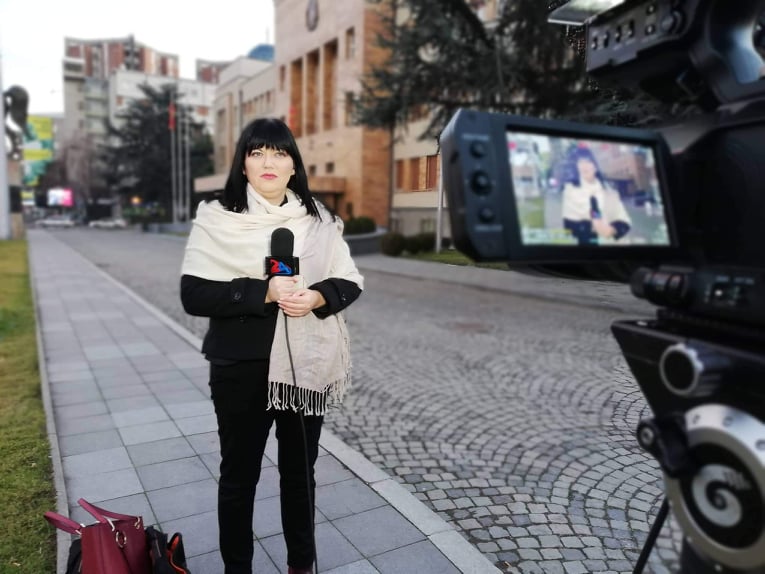 Mrgja testified in an investigation conducted by the Public Prosecutor's Office in 2017, which she hoped would bring the perpetrators to justice. That didn't happen.

In June 2020, in an interview with the Media Reforms Observatory, a project of Metamorphosis Foundation that monitors media legislation, she said:

I expected that the state would repay me with justice. I thought the same thing when I appeared as a witness in court to testify, twice, but it was all in vain. My hand was still bandaged, the blows to my face and head were fading, but the flashbacks of all the bloodshed on April 27 remained quite vivid. They remain vivid and painful even after three years, especially because of the injustice I witness.

In the same interview, Mrgja remembered that it was fear that kept her going that day: “I knew that the louder and more detailed I was on air, the better the chances of survival for everyone.”

At the same time, she says, going live made her more vulnerable as the perpetrators recognized her, and began to insult and attack her. She says:

Traitor, Soros’ slut, Zaev’s servant, “[ethnic slur for Albanian] whore” were just some of the insults addressed to me. They pushed me against a wall. My arm hit the wall so hard, my shoulder still hurts. I was punched in the face. When I asked a security guard for help, he answered, “I can’t do anything.” The image of a pool of blood on the parliament corridors haunted me at night in my sleep. 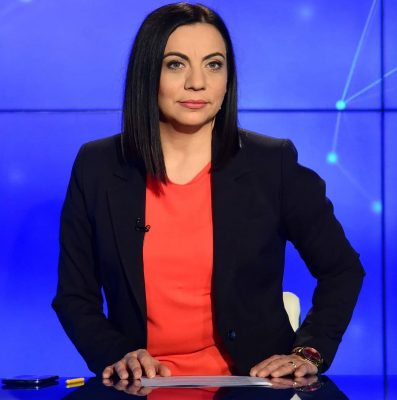 Mrgja recalls the harrowing moment when the Special Forces stormed in with smoke grenades and she began to suffocate. As she desperately tried to leave the room, the perpetrators barred her.

“Then I thought ‘this is it, I’m not coming out alive,’ all while texting my family ‘I’m fine, don’t worry,'” she said.

Her colleague Nataša Stojanovska, who works for TV Telma, also told Meta.mk that April 27 will forever be etched in her memory.

“We were not only prevented from reporting, but my life and the lives of my colleagues were also endangered, just as the lives of the politicians,” she said.

Stojanovska adds that the memories of that dramatic day cannot be erased even after three years.

“I still feel the trauma today. That is why everyone who participated in that attack must be punished.”

Correction note: A previous version of the story mistakenly stated that the court verdict was made on December 11. The correct date is December 10. We apologize for the mistake.