The government turned to penal codes to stifle coronavirus criticism 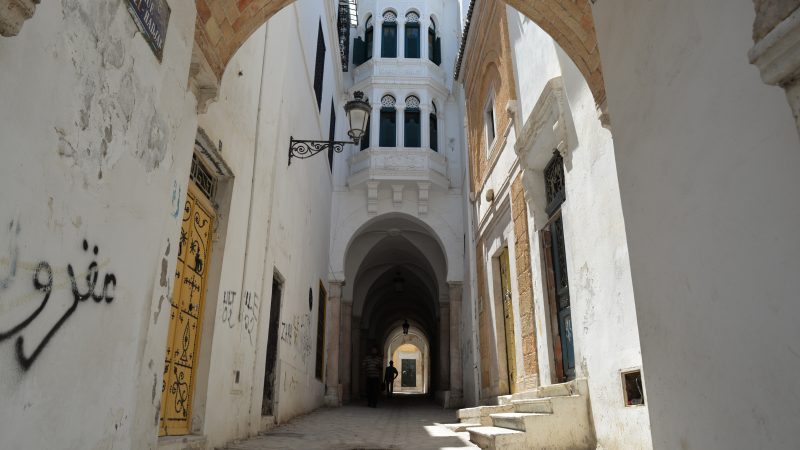 As Tunisia completes a four-day lockdown to control a second wave of the coronavirus, protests against the curfew have turned violent, leading to the arrest of 630 mostly young people.

While Tunisia has been lauded as a success story in its transition from uprising to democracy, local authorities have, throughout the pandemic, resorted to historical tricks by using vague, existing laws to curb freedom of expression and limit citizens’ rights to information.

In early March last year, the Tunisian Health Ministry reported the country’s first confirmed coronavirus case. That month, President Kais Saied announced a curfew combined with a lockdown and other restrictive measures to curb the spread of the virus.

As the number of daily COVID-19 infections dropped to zero cases, the government gradually started to ease restrictions in May 2020. However, with another surge in COVID-19 cases in October 2020, many hospitals were reporting full capacity and local authorities imposed new restrictive measures.

Tunisia’s constitution guarantees the right to access information and the parliament’s 2016 adoption of an access to information law further cements it.

Last January, as reports of COVID-19 infections in Europe flooded the news, Health Minister Sonia Ben Cheikh communicated preventive measures at borders to control the virus. But this crisis communication was mostly limited to press conferences and frequently delayed speeches.

On the civil society front, several joint efforts to provide critical information to the public resulted in projects such as covid-19.tn, an online portal that provides the latest COVID-19 news and information.

The Health Ministry continues to post daily on Facebook, the most used social media platform in Tunisia. These updates typically cover new, confirmed cases, deaths, recovered cases, hospitalized cases, and cases-per-region. However, the updates share little or no information on hospital capacity.

Around September, as the numbers of new confirmed cases increased, these Facebook posts began to garner criticism for alleged irregularities, as they merged statistics and stopped including per-region updates, which were a significant factor in determining curfews and lockdowns.

The Health Ministry resumed providing information following an access to information request by I Watch Tunisia, a civil society organization. Experts criticized the absence of coordination between institutions.

On January 17, Adnen Aswad, president of the National Institute of Access to Information, called on public health institutions to “further provide detailed and clear information regarding the lockdown” measures and restrictions.

Aswad also said that the required communication with citizens is “not at the required level,” leading to “confusion among citizens, chaos, and undermined the citizens’ trust in these institutions and disrupted the work of journalists and civil society, due to withholding accurate information.”

As the emerging health crisis began to cast a dark shadow on an already stagnant economy, citizens began a more critical exchange about the pandemic in digital spaces. Yet, the government turned to its existing penal codes to stifle any criticism of its coronavirus response in an attempt to control the coronavirus narrative.

Blogger Hajer Awadi was charged with “insulting a civil servant” under Article 125 of the penal code and “causing noises and disturbances to the public” under Article 316 of the penal code, after she posted a video on her personal Facebook account criticizing government corruption and the poor distribution of basic food in her region. She was sentenced to a suspended 75-day prison term by the first instance court, after she stayed in custody for a week.

In a similar case, in April 2020, Facebook blogger Anis Mabrouki posted a video on his Facebook page filming a crowd of people protesting against the government for its failure to distribute financial aid in front of the closed mayor’s office in the town of Tebourba. Under Articles 316 and 128 of the penal code respectively, he too was charged with “causing noises and disturbances to the public” and “accusing public officials of crimes related to their jobs without furnishing proof of guilt.” Both articles are listed under chapter Four of Tunisia’s penal code entitled “Attacks Against Public Authorities.”

Article 128 provides for up to two years prison sentence and a fine on any person who accuses a public official of illegal acts. Mabrouki was arrested for 15 days until the courts acquitted him on April 30, 2020.

Both cases, however, got limited press coverage, in part because they occurred mid-crisis and interior regions — and also because the content did not relate to well-known public figures.

Shortcomings of the legal framework

Although Tunisia’s 2014 constitution guarantees the right to privacy and personal data protection, the right to access information and communication networks, as well as the right to free expression and freedom of the press, authorities have found useful tools in old legal texts that remain relevant in the absence of a constitutional court.

A constitutional court, where defendants can appeal when they face prosecutions under unconstitutional laws, has not been established thus far. It is constitutionally required, but parliament failed eight times to elect three members with two-thirds majority required by law, therefore blocking the appointment of other members by the president and the supreme judicial council.

The debate to reform and revoke repressive laws started as early as 2011, with the interim government pending Tunisia’s 1959 constitution, but many legal texts and decrees that contradict the 2014 constitution and violate human rights remain in effect.

Many activists, bloggers, journalists and social media users have endured harassment, intimidation, imprisonment and other sanctions under these laws.

In a recent report, Amnesty International reviewed 40 cases of Tunisians investigated or prosecuted by the Tunisian authorities between 2017 and 2020, in relation to peaceful online speech under the penal code, telecommunications code, and the press code.

These provisions — spread across many legal texts — gave the veneer of legality to the former Ben Ali regime to restrict freedoms, interfere in the judicial process and repress any political opposition.

The Tunisian democratic transition remains fragile as long as these laws remain unreformed. Citizens will continue to remain at the mercy of authorities who enforce vaguely worded legislation.

For instance, the telecommunications code states in Article 86 that anyone found guilty of “using public communication networks to insult or disturb others” could spend up to two years in prison and maybe fined.”

The current challenges in Tunisia go beyond the health crisis — touching on social, economic, and political concerns. Accurate, trustworthy public information is vital to guide citizens during a health crisis and avoid the spread of misinformation.

Tunisia’s efforts to control the COVID-19 narrative has had a profound impact on citizens’ digital rights.