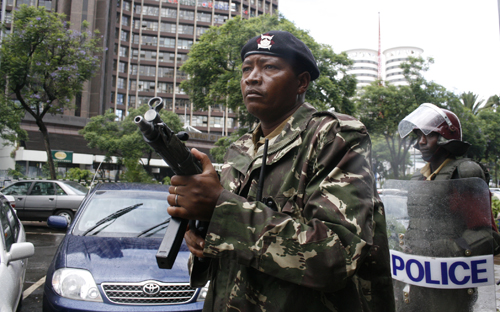 Kenya police have taken to Twitter in an effort to gain the population's trust but their handling of the arrest of a high-profile blogger has instead brought on the fury of public opinion.

On March 4, the official Twitter account of The Directorate of Criminal Investigations—Kenya @DCI_Kenya published a thread confirming the arrest of blogger Edgar Obare, for allegedly seeking to defraud and extort 10,000 U.S. dollars from a Kenyan politician.

In a Twitter thread that contained a series of salacious posts, including photos of the blogger and his alleged accomplice, the DCI accused Obare of outright blackmail. The posts alleged that he was a serial fraudster:

In a case of outright blackmail by fraudsters who intend to benefit financially from prominent personalities, by tainting their images online & demanding money not to post ‘scandalous’ information about them, detectives have once again arrested serial fraudster, Edgar Obare. pic.twitter.com/9jiJQXQpdn

His actions were deemed by the DCI, via the same Twitter thread, to be in violation of Section 23 of the Computer Misuse and Cybercrime Act, 2018, which states that;

A person who knowingly publishes information that is false in print, broadcast, data or over a computer system, that is calculated or results in panic, chaos, or violence among citizens of the Republic, or which is likely to discredit the reputation of a person commits an offence and shall on conviction, be liable to a fine not exceeding five million shillings or to imprisonment for a term not exceeding ten years, or to both.

If charged and convicted, Obare could face up to 10 years in prison.

This current arrest is not Obare’s first brush with Kenyan authorities, however. In July 2020, he was arrested and questioned for his titillating exposés of scandals involving well-known Kenyan personalities shared via his Instagram Stories.

Since Section 23's assent into law in May 2018, many bloggers have been arrested and charged under the Act for alleged hate speech, spreading false information about the COVID-19 pandemic, or criticizing the government online.

According to Bowmanslaw.com, the Bloggers Association of Kenya (BAKE) filed a petition in the High Court challenging the constitutionality of 26 sections of the Act, including Section 23, prior to the commencement of the Act. BAKE argued that the Act infringed on freedom of expression and the right to privacy. In February 2020, the petition was dismissed and the suspension on the contested sections lifted.

The Bloggers Association of Kenya (BAKE) case challenging the Computer Misuse and Cybercrimes Act, 2018 has been dismissed after High Court Judge James Makau declared that the law is valid in its entirety. https://t.co/qhTvv9wfkJ#CybercrimesLawke

Although BAKE has since appealed the ruling, the effect is already being felt. Bloggers and internet users have faced increasing intimidation and violence for their online activities in recent years.

As the country heads to a presidential election next year, there have been similar cases of Kenyan bloggers and social media users being arrested under the Act for spreading false information about politicians. With over a year to go until August 2022 when Kenya goes to the polls, there are already increased concerns over the spread of misinformation on social media which analysts say could undermine democracy.

DCI accused of framing blogger and having misplaced priorities

Kenyans on Twitter expressed their anger following the publication of the thread and accused the DCI of intimidation and framing Obare. One user thought Obare could sue the DCI:

I remember on the insta story edgar obare assured alfred he will volunteer to be a witness now imegeuka ni the suspect??? Like how??? @DCI_Kenya edgar can sue you for calling him serial fraudster without evidence #freeedgarobare

I remember on the insta story edgar obare assured alfred he will volunteer to be a witness now suddenly he has become a suspect??? Like how??? @DCI_Kenya edgar can sue you for calling him serial fraudster without evidence #freeedgarobare

Another wondered about others wrongly detained:

Edgar Obare situation shows how they can frame you to fit a crime .Imagine how many innocent people are behind bars because of some privileged person taking advantage of their power .#FreeEdgarObare

Yet another person called into question the Directorate’s priorities in the face of other high impact unsolved crime cases:

So the DCI has the energy and resources of arresting Edgar Obare our “tea master” over nonsense but when he reported the underage sex rings they did nothing, Absolutely nothing!#freeedgarobare

A recent feature by the Washington Post revealed that the Kenya police see Twitter as their main PR tool in a bid to change the public’s perception about the work that they do:

“To become known as crime fighters, not killers”

Speaking to the Post, the director, George Kinoti explained why:

“For a very long time in Kenya, police have been thought of as killers. See a policeman? You run. Nothing good could come of it,” he said. “If we want the public’s confidence, we have to show them we are not all like that—we do work for them.”

Violence is the hallmark of Kenya policing. In April 2020, Human Rights Watch released a report on police brutality during dusk-to-dawn curfews imposed in March 2020 to contain the spread of COVID-19. According to the report, within the first 10 days of the curfew, six people died from police violence. Eleven months into the curfew, 20 people had been killed.

Kenya Police has a long history of using excessive force, often resulting in unnecessary deaths. According to Moina Spooner of The Conversation, various factors including its beginnings under British colonial rule, poor recruitment policies, corruption and poor accountability, have greatly contributed to this. Kenyans no longer think of the police as a service.

Somehow, the DCI believes that PR, and specifically “live-tweeting,” will change Kenyans’ perception without bringing about the much needed reforms within the force.

Since September 2020, the official Twitter account for The Directorate of Criminal Investigations-Kenya @DCI_Kenya has been sharing appalling stories of arrests on its profile in a bid to demonstrate to Kenyans that they are indeed crime solvers and not just killers who use excessive force. 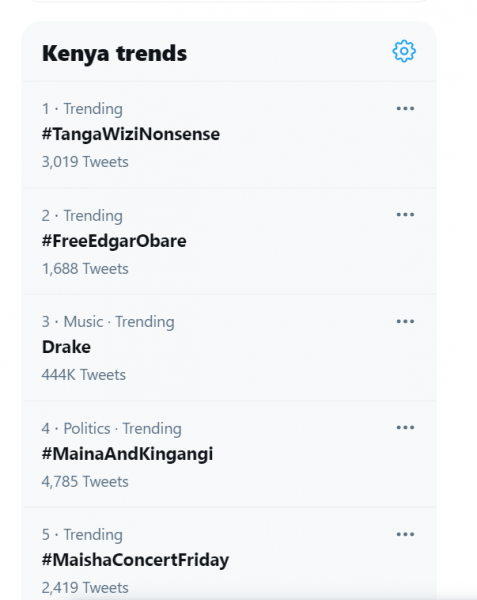 According to the Washington Post article, the DCI hopes that its increased engagement on Twitter will help it fight crime.

The DCI’s PR efforts might just turn them into victims of their own success, however.

Following Obare’s arrest on March 4, Kenyans on Twitter started using the hashtag #FreeEdgarObare to call for his release. As of 10:00 hours GMT+3 on the same day,  the hashtag was among the top trending hashtags in Kenya.

As one user noted,

The president said on live radio that every day two billion is stolen from the government, you haven't arrested those one, you are after Edgar obare, a digital gossiper,.. Wrong priorities menh!!!

Update: Edgar Obare was released on bail on March 6 and has claimed that the Director of Criminal Investigations (DCI) is being used by powerful people to unfairly target him. 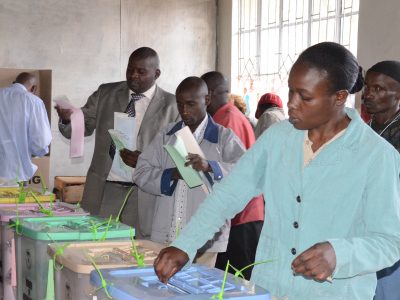