'In our village, the forest land has not been distributed. It is so full of corruption!' 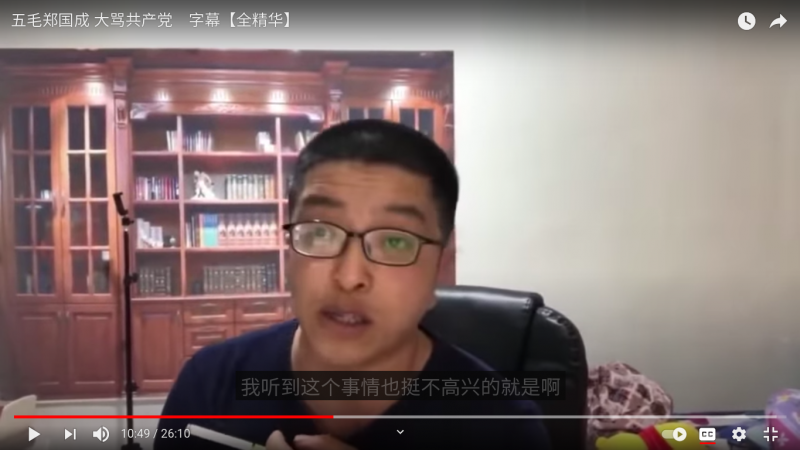 This post was originally published in Chinese on Hong Kong based CitizenNews on March 19, 2021. This translation is published on Global Voices via a content-sharing agreement.

If we really believe the U.S is bad, then we have to conduct a thorough search from central to local government authorities and see who has sent their kids to the U.S. They should be the enemies of the people.

This kind of comment is often bandied around on Chinese social media, but this time it came from famous patriotic YouTuber Zheng Guocheng during a four-hour-long live stream on March 11.

The next morning, Zheng deleted the video and uploaded another apologizing for his comments, claiming was drunk the night before. Still, many netizens replied that they enjoyed his rant which they perceived as honest.

Zheng has been a YouTuber for three years. With over 100,000 subscribers, his channel Chinese youth Zheng Guocheng is famous for its pro-China content and criticism of its adversaries. For that reason, Zheng is often described as “50 cents,” Chinese slang for government-funded online commentators.

His four-hour-long outburst on March 11 caught his audience by surprise. During the live stream, he complained about the Chinese Communist Party and government authorities — from Forestry and Grassland to Propaganda authorities — as well as his fellow patriotic online commentators.

He also revealed to his audience that patriotism is a performance to make a living and that just last month he had made a 7,000 USD income.

Zheng's rant was triggered by a recent visit to the Forestry and Grassland Administration in Jilin province. The local authorities there had failed to implement a land distribution policy and the dispute remained unsolved for over 10 years.

Zheng said the problem was caused by corruption and decided to tell the story “for the sake of villagers’ rights”:

In our village, the forest land has not been distributed. It is so full of corruption! The National Forestry and Grassland Administration has a document saying that all households could have the right to hold a piece of land. But nothing has happened here.

When an ordinary person steals 10,000, they go to jail for three years. For corruption? Even if the amount is up to billions, the sentence is just three years. How’s that fair? Corruption is worse than stealing. If stealing 10,000 is three years, then billions should cost the lives of an extended family. In my opinion, all corruption should receive a life sentence regardless of the amount.

Zheng recalled the patriotic education he received during high school, when, he said, his teacher used to say that “the U.S will perish” and urged students not to go to the U.S, but now “the majority of the officials send their kids to the U.S.”

When asked why he did not hand in a petition to Public Complaints and Proposals Administration, Zheng said:

If I visited the provincial petition office, my cousin could never become a civil servant (…) You can see the problem here, what’s the point of the petition system? If the system is useless, why don’t you abolish it? If it exists, why punish the petitioners’ family if they file a petition? You keep saying that China is awesome and strong, what’s the point of being strong?

Citing a case in Heilongjiang, Zheng said that “the path to petition is worse than death as it would affect the lives of your whole family.”

He also criticized censorship and official propaganda for “ignoring people’s suffering”. When being questioned about his “extremist view,” he said:

What makes me extreme? I can't even solve the problem in my real life and you blame me for being extreme? Shame on you!

In his apology video, Zheng said he had been drunk because he was going through family issues and that an old friend recently passed away. He promised that he would abstain from alcohol in the future.

After that, Zheng returned to his usual content, such as criticizing the U.S. and mocking Taiwan.

As Chinese media reported on his first video, and different clips of it had gone viral, Zheng uploaded another apology on March 17 claiming that his initial comments were being misinterpreted.

Still, many netizens left comments saying that he didn't need to apologize because he was simply telling the truth. Some asked him to drink before doing lives as they had enjoyed watching him talk while drunk.

Below is a Youtube backup of his four-hour talk on March 11: