Virtual rallies are a relatively new form of resistance in Russia 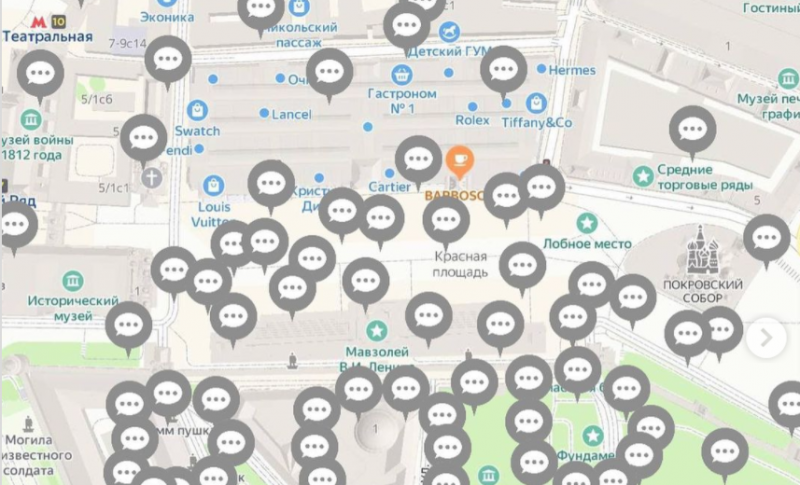 Screenshot of the Yandex.Maps cyber-rally organised by Aleksandr Rimov in Moscow and St Petersburg. The comment icons on the map represent participants’ messages. Image from Aleksandr Rimov on Instagram.

The organiser of a ‘cyber-rally’ on Russian map platform Yandex.Maps against the new law limiting educational activity has been issued a fine for ‘obscene language’ used by the rally participants online.

Aleksandr Rimov, who lives in Zelenograd, an exclave in Moscow Oblast located 37 kilometers north-west of central Moscow, organized the rally on June 1 to protest the new legislation adopted by the Russian parliament that severely limits academic freedoms and international collaboration. 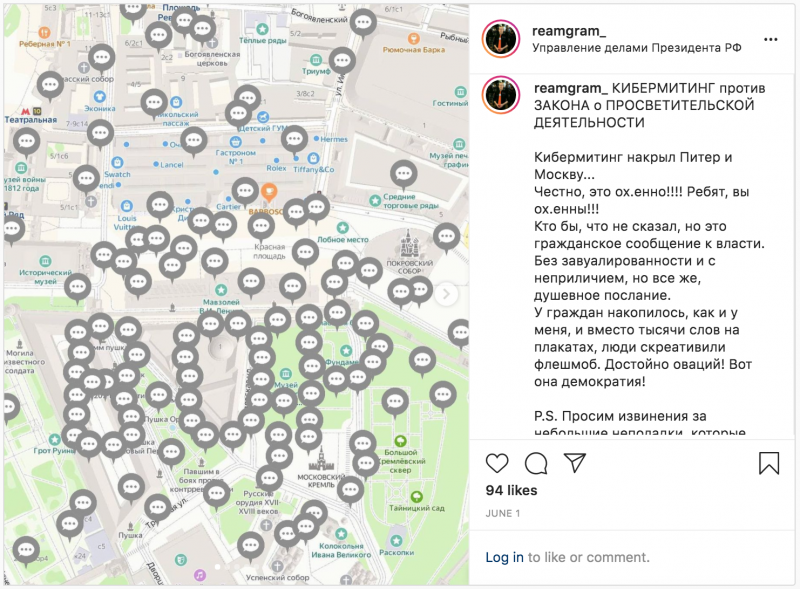 Screenshot of the Yandex.Maps cyber-rally organised by Aleksandr Rimov in Moscow and St Petersburg. The comment icons on the map spell out the word “вор” (thief) in Russian. Image from Aleksandr Rimov on Instagram.

Posting several screenshots from the cyber-rally on the mapping platform on his Instagram account, Rimov was ecstatic, writing:

The cyber-rally has spilled over Moscow and Piter (Saint Petersburg – GV). Honestly, this is f*cking amazing!!! Guys, you're f*cking amazing!!! Whatever they may say, this is a civic message to the authorities. Somewhat straightforward and a bit obscene, but still, a heartfelt message. The citizens have had enough, just like I have, and instead of thousands of words on posters, people have created a flashmob. This is worth an ovation! This is democracy!

Shortly after the rally, Rimov was detained by police. The police officers issued him with a 10,000-rouble fine for ‘obscene language online’ used by those who participated in the rally. According to Article 5.61, part 2 of the Russian administrative violations code, “public insults perpetrated which the aid of the internet” are subject to administrative fines.

The activist told independent news outlet MBK Media he intends to appeal the fine: “When the police started saying that this amounts to ‘online obscenity’, I said I didn't write it, other people did”. The police then requested Rimov to provide the personal data of those who had registered for the cyber-rally, and when he refused, said that their investigators would “monitor and gain access to participants’ data anyway.”

Discontent on the map

Virtual rallies are a relatively new, but popular form of resistance in Russia. Unlike street protests, which require prior authorisation from local authorities, online rallies aren't technically subject to the same restrictions. However, it seems Russian law enforcement is being creative in finding ways to suppress even exclusively digital attempts to occupy public space.

Activists usually coordinate their activity to mark their location in specific places (e.g., the Red Square in Moscow) and to add comments with protest messages using the Conversations feature in Yandex.Maps and Yandex.Navigator. Occasionally, the location markers themselves are orchestrated in such a way as to form a word or a phrase (as in one of the images from Rimov's rally posted on his Instagram account (third in the carousel), which spells out an obscene retort indicating the protesters’ ire at state taking control of the education sphere).

2020 saw one of the first large waves of cyber-rallies in Russia. Inhabitants of several large cities organised spontaneous protest rallies on Yandex.Maps and Yandex.Navigator to voice their discontent at the various public health restrictions during the COVID-19 pandemic. Ironically, the rallies were quickly ‘dispersed’ as Yandex began to delete users’ comments in locations of “mass public digital gatherings”.

The recent changes to the Russian law on education, which Rimov and his fellow internet users were protesting against, came into effect on June 1, 2021. The amendments ban any non-state approved educational activities and cooperation with foreign academics or institutions, ostensibly to counter “negative foreign influence in the educational process” and “propaganda in the guise of educational activities”. The academic community and other experts have condemned the changes for being overly broad and have warned that they could impact important public outreach, as well as threaten less formal educational activities such as online courses, YouTube lectures, and even podcasts.