“Hong Kong, add oil” is censored as Pro-Beijingers associate the expression with sedition

An effort to rebrand and relaunch Hong Kong is ruined 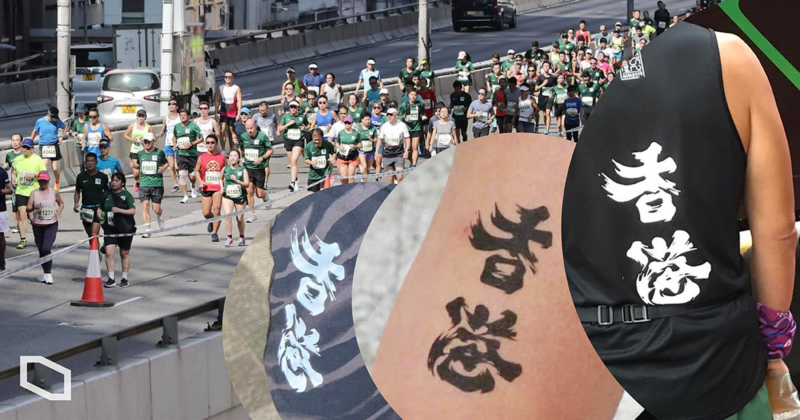 Image from the Stand News. Used with permission.

“Add oil” (加油) is an expression of encouragement and support to a person. It is commonly used in Chinese-speaking regions, particularly at sports games when audiences want to express their support for players. For example, the expression, “Hong Kong, Add Oil” was used by Chinese leaders during the 2008 Beijing Olympics, as noted by New York Times reporter, Austin Ramzy on Twitter:

Worth stressing how generic the slogan 香港加油 is. It's basically just “Go Hong Kong!” and has been used by everyone. Here it is attributed to then-CE Donald Tsang during the Beijing Olympics and then vice premier Xi Jinping on an inspection tour ahead of those games https://t.co/O5o9W0wNM4 pic.twitter.com/UjXLlgRoET

However, in a recent Hong Kong court case, the expression was labeled as seditious and banned from appearing in the annual city Marathon on October 24, 2021, simply because it was chanted by protesters during the 2019 anti-China extradition protests.

The Hong Kong Marathon is the largest sporting event in the city. The race which was first launched in 1997 with sponsorship from the Standard Chartered Bank, attracts 74,000 local and international runners annually. It has been praised as a major image promotion activity for the city.

After being canceled for two years due to the pandemic, the race was resumed to help “rebrand” or more officially “relaunch” Hong Kong. As the city is still under semi-lock down thanks to the “zero COVID policy,” only about 18,000 runners — mostly local residents — had registered for the event.

Then the heavy presence of police officers on October 24, the racing day, at the registration spot had attracted the attention of the press. Police officers were checking the runners’ outfits. Some runners were stopped for a body search in the security booth and asked to change their outfits, a few were forced to quit the race as they did not bring extra outfits or they refused to comply with the rules against “political attire.” The Hong Kong-based online news outlet Citizen News interviewed a runner who was stopped by the police officers:

Miss Wong who participated in the second group of  Half Marathon was stopped at the security check point. The police officers said that she was “wearing political outfit”, which refers to her shorts printed with “Hong Kong, add oil”. She was asked to change her shorts and was taken away from the running lane.

Wong said that according to the news, “Hong Kong, add oil” should be OK. She was upset to be stopped like this. “The news said this is OK, the Hong Kong authorities kept changing the line, isn't this a trick?”

The specific printing of “Hong Kong, Add Oil” that Miss Wong wore was created by a Taiwanese production house around mid-June 2019 to express their support for Hongkongers. The two Chinese characters “Hong Kong” can be decoded as “Add oil” if the words are read horizontally, as shown in the tweet below:

This is not the first time the expression, “Hong Kong, add oil”, was censored. Last year, the Home Affairs Department banned a district council’s proposal to use “Hong Kong, Add Oil” on festival decoration for the new year. The government authorities claimed that the expression would “stir misunderstanding and affect social harmony.”

Then on October 18, Lingnan University Associate Vice President Lau Chi-pang testified for the prosecutor against an activist and told the district court that expressions including “Hong Kong, add oil” could be seditious depending on the circumstances. The activist, Tam Tak-Chi is facing 14 charges and eight of them are speech-related.

The annual Marathon is clearly a non-political circumstance and the Chair of the organizing committee William Ko told the press that outfits carrying the expression “Hong Kong, add oil” were not problematic. Although Ko did suggest tweaking the expression into “Runners, add oil”, the pro-Beijingers were not happy.

Under pressure, the Marathon host, government-funded Hong Kong Association of Athletics Affiliates, issued a statement on October 19, stressing that “political elements should not be injected into sport” and warned that if they discover illegal behavior or runners who violate the principle, they would invite the police to step in.

A commentary published on October 20 from China state-affiliated Ta Kung Pao explained the rationale of the pro-Beijingers:

If among the 18,500 participants, 5,000 of them wore pro-Hong Kong independence or black riot outfits, this wouldn’t be a Marathon, but a political show, which western media outlets would take it as a treasure […] If the host is trying to please everyone, the trouble makers would cross the line. History has proven, if you are ambivalent, they would take advantage; if you retreat, they would step on your face. Only when rules are written in black and white, attempts would be stopped.

Following the pro-Beijingers’ instruction, the host wrote clearly shared the rules around political attire before the race:

The Standard Chartered HK Marathon tomorrow is shaping up to be a politically sensitive event. pic.twitter.com/UByZFDkkR6

One Twitter user Meow Star was outraged at the arrangement. The Twitterer posted a local news report about the police action along with a screenshot of China state-run People’s Daily’s propaganda slogan, “Hong Kong, add oil,” against anti-extradition protests in 2019 and slammed the arrangement:

Can’t you read what the People’s Daily had said? This is not a Hongkongers’ Marathon, such an insult to ask a runner to hide his tattoo. Anyone with a sense of self-dignity should not join this.

Others mocked the censorship measures as a political farce, with one user @meemeegu calling the regime paranoia on Twitter:

Fear not, folks, for such a regime. This paranoia says nothing but weakness. Changing shirts and covering up tattoos are easy things to do. Changing hears and minds? Forget about it. #CCP and their cronies already lost this #marathon. 香港加油 https://t.co/gcdoVBFDEI pic.twitter.com/cAGMLO4OV7

One citizen @Bernard To posted political cartoonist Baiduicao’s artwork to mock the incident:

This politicalized sport farce has just reminded all of us those gestapos are the one who have final say in #HongKong nowadays.#香港加油#HongKongAddOil pic.twitter.com/u2xbfQj4OS

The effort to “relaunch” Hong Kong has now turned into more evidence that the city is no longer free.

China  3 May 2022
END_OF_DOCUMENT_TOKEN_TO_BE_REPLACED
Cancel this reply