The ruling has implications for freedom of speech in Southeast Asia 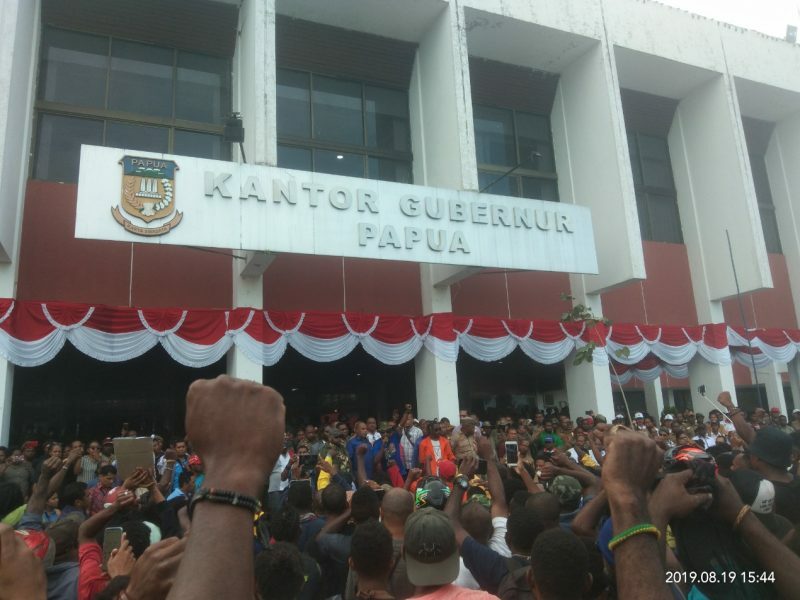 A protest outside the Papuan governor's office in Jayapura, the capital of Papua Province. Photo courtesy of Arnold Belau of Suara Papua, based on a Netizen Report post

On October 27, Indonesia's Constitutional Court ruled that it is constitutionally acceptable for the Indonesian government to block and throttle the internet in times of social strife. The ruling ended a more than two-year-long dispute over the government's decision to block internet access on the island of Papua amid protests and demonstrations. The decision is part of a larger pattern of Indonesia's diminishing speech rights in recent years.

Activists say the ruling further erodes digital freedoms in the archipelago and sets a dangerous precedent for free speech in Southeast Asia. Reporters also note that the decision makes it difficult for journalists to report on conflict or spread relevant information.

Gloomy. A number of journalists who were on duty in Papua when the internet was blocked said that it was difficult to report the events that occurred and a lot of property and human lives were lost because they were late in getting information. Darling, what a great one @dewanpers ignore

Latest work, the internet situation in West Papua, caused anger among West Papuans. Lack of trust towards the government. Even tho the ministry has already said that it caused by a broken underwater cable.

Almost none of them that I talked with, buying it. https://t.co/p9Q8wWOIcn

In August 2019, numerous civil society groups, including the Southeast Asia Freedom of Expression Network (SAFEnet) Indonesia and the Alliance of Independent Journalists (AJI), filed a lawsuit after the government throttled internet access amid pro-independence protests and demonstrations in Papua. Ministry of Communication and Information Technology officials claimed the move was intended “to speed up the process of restoring the security and order situation in Papua and its surroundings.”

During this period, the government also deployed military and police personnel and restricted social media and news coverage of the conflict. Some worry the choice to enact an information blackout in the region during times of unrest is meant to cover up human rights violations by the Indonesian police and military.

In many ways, the move backfired as criticism poured in from all over Indonesia. During the internet blackout, the Jakarta Post Editorial Board published an article calling it an “Illegal internet ban” and urging “Never again,” calling on the government to stop using such authoritarian tactics. Others discussed the dangerous implications of the internet blackout, as Ika Karlina Idris noted in the Jakarta Post.

By shutting down access to means of online communication, not only has the government disregarded the right of Papuans to freely express themselves and inform the entire country about the events happening in their region, but also the right of all Indonesian citizens to know what’s happening on the ground.

Damar Juniarto, Executive Director at SAFEnet expressed his disappointment with the court's decision in an interview with Global Voices.

We were unhappy with Constitutional Court decision that neglected our request over article 40 point 2b of EIT Law in Indonesia. We requested for a better regulation where there are limitations for the govenment authority to block Internet content and to cut access to illegal content and this limitation should follow international human rights standards. Without that limitation, we were worried the Indonesia government will implement more Internet restrictions based on this Constitutional Court decision that not follow or address human rights standards like their previous actions.

In June 2020, the Jakarta State Administrative Court ruled that the government's actions were unlawful, though this most recent decision overturns that ruling.

In last week's ruling, seven out of nine judges voted in favor of the government. The court explained that the government has a responsibility of “preventing the dissemination and use of electronic information and/or electronic documents that have prohibited contents in accordance with statutory provisions.”

Indonesian communications ministry spokesman Dedy Permadi said the government would use the ruling to “prevent the spread of internet content that violates the law.”

Any content that violates the law, disturbs the public, disrupts public order, or informs others how to access prohibited material is illegal in Indonesia.

The resource-rich island of Papua in Eastern Indonesia has long sought independence, which has consistently drawn reproach, violence, and censorship from the Indonesian government. Many note that the conflict with Papua also has racist and colorist undertones as Papuans are ethnically Melanesian and can have slightly darker skin, while the majority of  Indonesians are Austronesian.

But Papua is not the only target of government-sanctioned internet blackouts. After violent protests erupted nationwide following the 2019 Presidential election, the internet was cut in Jakarta. And more recently, the internet was cut amid protests over the controversial 2020 omnibus law, which many saw as expanding economic privileges at the expense of workers’ rights and environmental protections.

Some NGOs warn that under the pretext of the coronavirus pandemic, the Indonesian government has been slowly eroding freedom of speech and digital rights in the country.

In May 2021, Human Rights Watch (HRW) sent a letter to Indonesia's minister of communication and information technology criticizing the recent Ministerial Regulation 5 (MR5), which came into force in November 2020. According to HRW, the regulation “requires all private digital services and platforms to register with the Ministry of Communication and Information Technology and agree to provide access to their systems and data as specified in the regulation. Those that fail to register by May 24 will be blocked in Indonesia. The minister should suspend the regulation before this deadline.”

The Lowly Institute, an Australian research institute, has described the bill as a major “authoritarian threat” as it essentially forces digital companies to provide the government backdoor access to all systems and data. The government now has the power to block or restrict any online content it deems offensive, based on vague “elastic laws” that prohibit everything from “damaging someone’s reputation” to “threatening public decorum.”

Ministerial Regulation 5 is a tool for censorship that imposes unrealistic burdens on the many digital services and platforms that are used in Indonesia. It poses serious risks to the privacy, freedom of speech, and access to information of Indonesian internet users.

With the increasingly tight free speech policies, one thing is for sure, as the third-largest global democracy and the freest nation in Southeast Asia according to the Freedom House Index, Indonesia and President Joko Widodo are headed down a precarious path that could have widespread ramifications for freedom of expression in all of Southeast Asia.