Rubtsovsk residents are getting messages about soldiers' looting 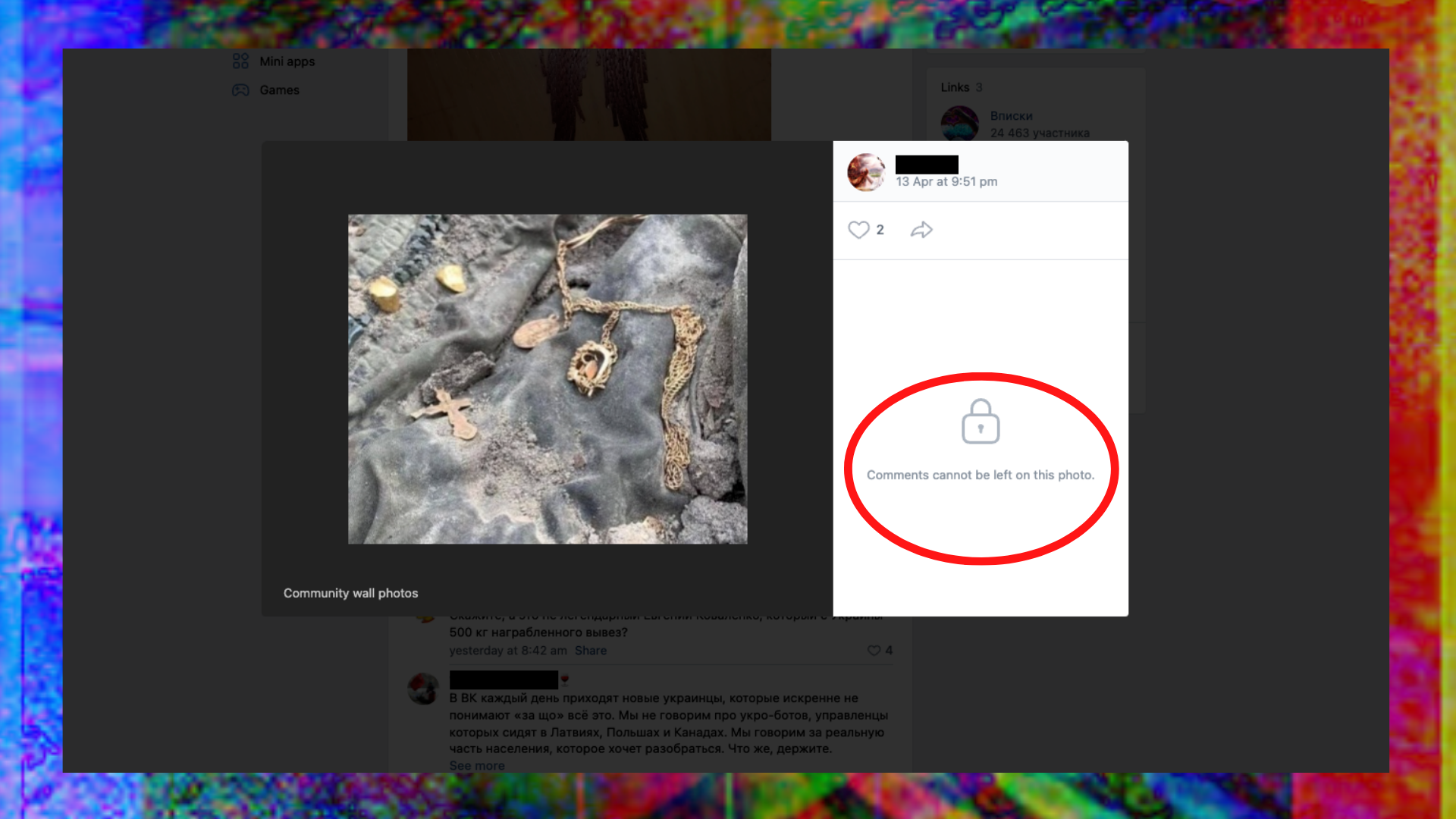 A screenshot of a marketplace post in a VK group where moderators had prohibited all comments. Photo illustration: Ivan Sigal.

The Russian town of Rubtsovsk has been in the news recently after Russian soldiers were seen mailing large amounts of goods from the Belarus town of Mozyr, to various destinations in Russia. Most of the packages were mailed to the town Rubtsovsk in Russia's Altai region, according to some Belarus media sources, and are thought to be goods stolen from Ukraine. And now, Ukrainian users are directly intervening in an online marketplace as a way of communicating with Russians about the war, as residents in Rubtsovsk advertise items that could have been looted.

In the process, they are challenging Russian propaganda by showing Rubtsovsk VK users videos and photos from Ukraine, including images of the soldiers who sent 450-kg packages “back home,” and of the blood, murders, and bombings.

Although it is not publicly known exactly where in Ukraine the Russian soldiers were stationed, Mozyr is not far from the Kyiv region where, in the town of Bucha and many others, the Russian army appears to have committed horrible war crimes against civilians, including murder, rape, torture, and looting.

The Russian media source The Village describes Rubtsovsk as a “depressive” town that was built in the 1940s around a tractor plant, which went bankrupt in 2011.

There are four prisons in and around Rubtsovsk. The town's population is around 140,000, and average salaries are around USD 250 per month. In fact, this is not extraordinary: there are thousands of towns like Rubtsovsk in various regions of Russia. They are called “monotowns” and were usually built around some large industrial employer which in the years after the USSR collapsed became obsolete, but the towns remained.

As in most medium-sized towns, VKontakte (“Being in contact”) and Odnoklassniki (“Classmates”) are the preferred social networks among those who use the internet. In our previous study, we concentrated on the group titled “Typical [city name],” where users share photos, town news, and stories. There is a “Typical Rubtsovsk” group, too. But on April 5, something unfolded in the provincial online life of this VK’s group: “ATTENTION! IMPORTANT INFORMATION!” states an announcement in Russian on the main page. We have been attacked by a network of Ukrainian bots and commentators! In order to… prevent breaking article 207.3 of the Criminal Code of the Russian Federation, we must block all the comments temporarily. We must remind our subscribers that there is informational war conducted against Russia with all possible methods.”

However, another, perhaps even more popular group in Rubtsovsk’s VKontakte remained open to comments. The group, which is public, is called “Listened to in Rubtsovsk” and has 26,819 members. It is mainly dedicated to selling or exchanging household items or clothes and renting flats.

The very first announcement on the page is an ad selling silver earrings: 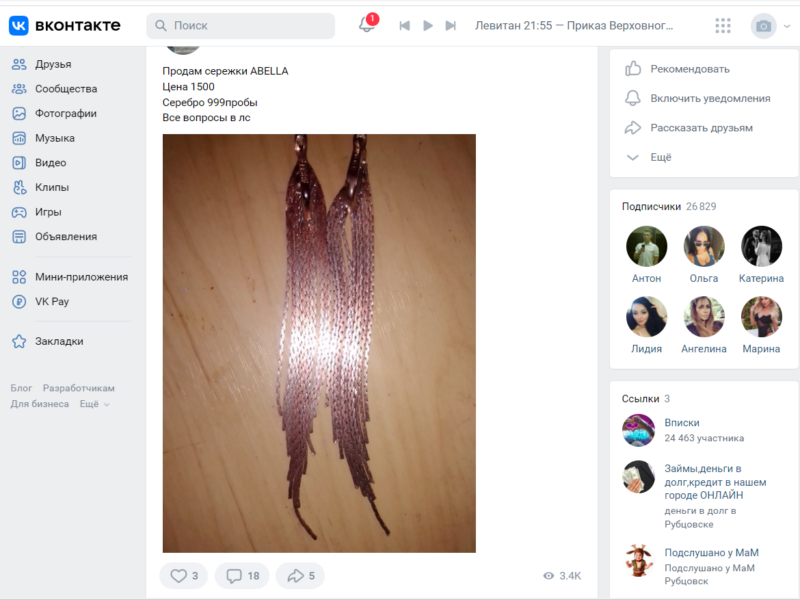 The first comment by Evgeniya asks: “tell me please, are these from the things stolen in Ukraine? Soldiers from Rubtsovsk have stolen a lot there. I wouldn’t want to have things that are cursed…”

Yurii follows with a photo of items that appear to be from a war zone, “Has anyone seen these? They are in Rubtsovsk…” 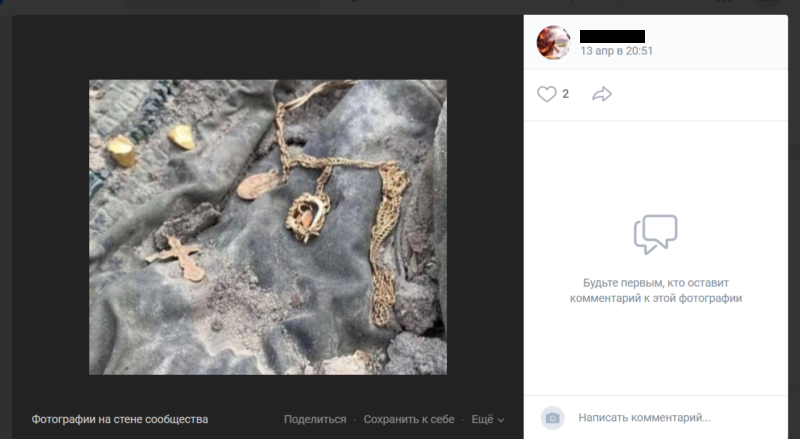 Several people are furious: “What are you saying? Do not comment if you are not intending to buy!” Or, more aggressively, “Have you held a candle [when they stole it?]?” meaning that the Ukrainian commentators are guilty themselves. A user named Tanya suggests: “They are getting paid for each comment!” and a user named Maria says “You are totally fucked up.” 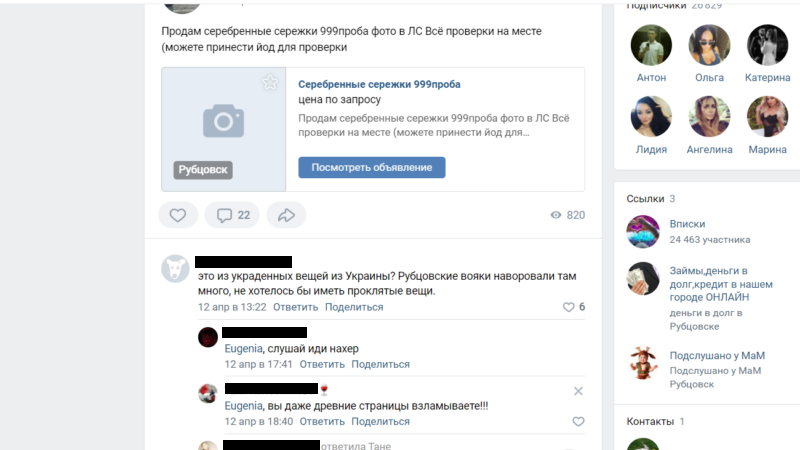 Next in line, someone is selling a purse “in good condition.”

“They were in a hurry, and anyway, probably don’t know what the price tag is,” answers Vitaly. 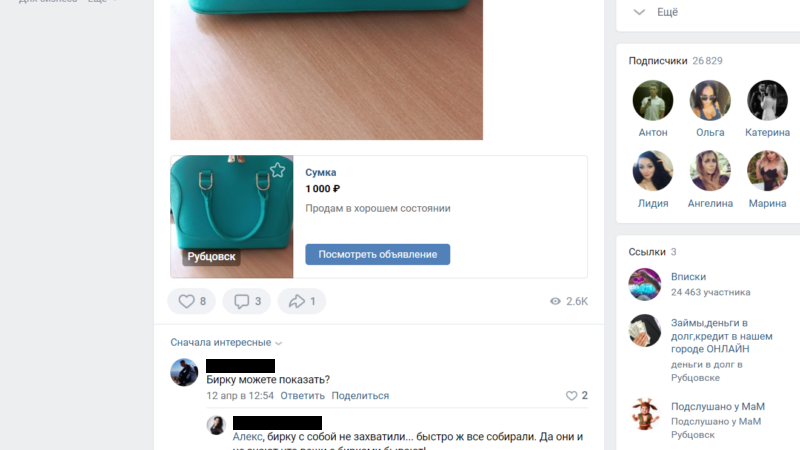 Further down the page, there is an announcement selling a blue winter jacket. 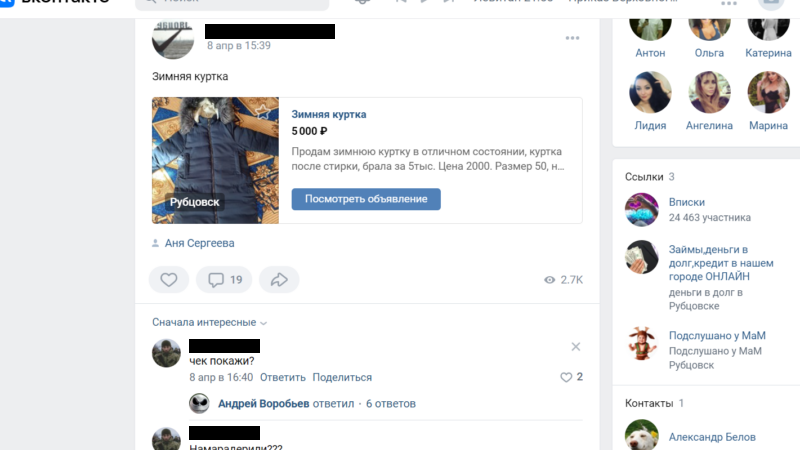 “Do you have a receipt for this jacket, Anya?” asks the first comment. Anya answers that she bought the jacket two years ago and no, she does not have one.

“Have you looted it?” asks Ivan.

“Why are you trashing this post with your comments, Ivan?” she continues.

“Why are you trashing our land with bodies of your dead soldiers, Anya?” he replies.

Rubtsovsk is a disgrace. The whole world is watching. The stolen goods from Ukraine will arrive soon. Wash them well, the blood is difficult to clean. #Kramatorska #Bucha #massacre #HeroesZ

Some people are in denial over the source of the goods.

“I know why there are posts like this. Because SDEK (the postal service) gave out information with personal data, phones, and addresses on the internet. Allegedly, soldiers sent things to Rubtsovsk. And somehow, Ukrainians decided to declare that it was Russian army who looted, not Ukrainians. And they could not have suggested that people could have bought these things in Belarus. That our army has good salaries but they could not think about it of course.”

Some are outraged: “Why do you give space to those comments in this group?! They are obviously lying!” 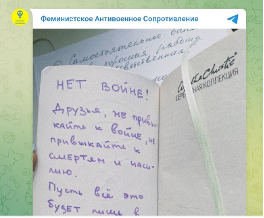 Some take a historical perspective: “We know what your Bandera did, and you are the same.”

While others are angry: “Go back to your f…ing Ukraine!”

However, none of them can easily shake the accusations.

Is this a good thing? some activists think that whatever the medium, exposing the truth about the war against Ukraine is one of the only ways to reach out to “ordinary Russians.” The feminist anti-war coalition is encouraging people to write the truth on banknotes and in books.

St Petersburg’s young artist Sasha Skolichenko switched price tags in a supermarket with anti-war statements and was later arrested for it. 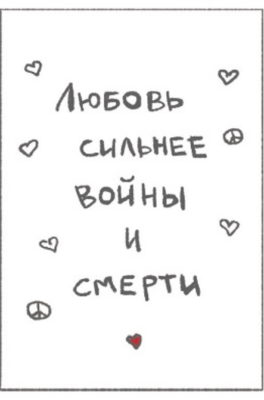 One of Sasha’s art works. It reads: “love is stronger than war and death.”

VK’s users are looking for things looted in Bucha and elsewhere. Possibly, the moderators will be slow, and algorithms way behind. The following image has a comment: “Have you removed them from a corpse in Ukraine?” 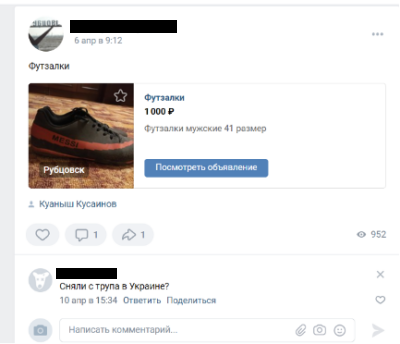 NOTE: all comments were translated from Russian by the author.