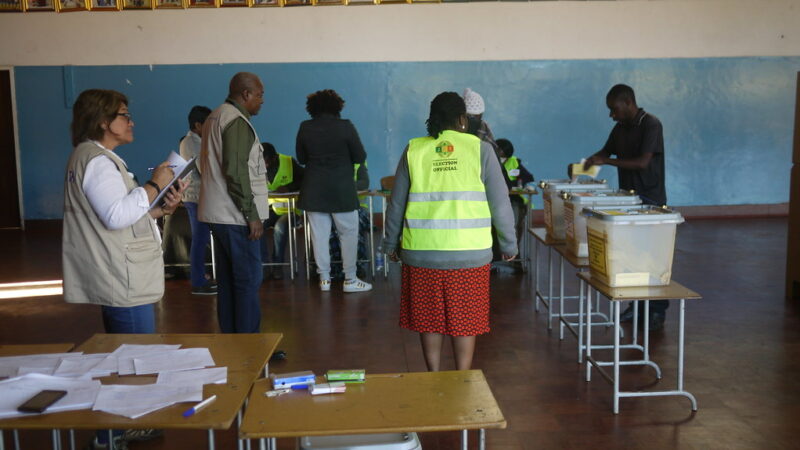 Image by Commonwealth Secretariat on Flickr, used under a CC BY-NC 2.0 license.

Following years of citizen mistrust of election management bodies and perceived lack of transparency, the use of biometric technology such as people’s physical and behavioural characteristics in political processes has swept across Africa. As Zimbabwe heads for general elections, constitutionally due in 2023, the campaign season will soon be in full swing.

The country held by elections on March 26, 2022, which saw the opposition party Citizens Coalition for Change (CCC) bagging 22 out of the 28 National Assembly seats. Although these by elections were a litmus test of the main election set for next year, what role is artificial intelligence expected to play in shaping political outcomes?

As voting day approached, a number of anomalies related to the voters’ roll were picked up and made public by civil society organizations, raising concern about the credibility of biometric voter data storage. These include allegations of manipulation of the voters roll by moving up to 177,000 voters to new constituencies and unsanctioned changes to at least 156 polling stations.

The fact that some of these technologies do not exclusively rely on internet transmission protocols to transmit and store data makes it incumbent upon African governments to adopt a broad approach to controls that address all information security breaches.

In the past 32 years, almost all of Zimbabwe's elections have been beleaguered by accusations of voter intimidation, vote rigging and violence. In the run up to the March 26 by elections, a familiar narrative thread of voter data manipulation was raised by the CCC and civil society organizations. The Zimbabwe Electoral Commission (ZEC) claimed that almost everything was above board and that the voters roll was constantly being updated. This lack of transparency not only corrodes confidence in biometric technology but it also frustrates the credibility and audit of such technology’s technical functionality.

In 2018, Zimbabwe entered into a strategic cooperation partnership with Chinese start up CloudWalk Technology, under which the government would gain access to a facial recognition database that it could use for all kinds of purposes. These uses would range from easier policing under the Smart cities initiative to tracking down political dissidents among others. In return, China gains access to this database of Zimbabwean citizens in order to train its algorithms and improve the ability of its surveillance systems to recognize darker skinned tones. The agreement is being implemented in stages and will soon reach development of camera and network infrastructure in Zimbabwe. AI driven facial recognition software has historically had difficulties with recognizing such skin tones and with this harvesting of Zimbabweans’ personal data, China will gain a globally competitive edge in the AI market.

As Zimbabwe’s electoral history will prove, information security breaches remain a regular threat. For instance, as the 2018 elections drew closer, the ZEC refused to give the then dominant opposition party, MDC Alliance, access to the voter’s roll stored in its servers arguing that such access could compromise security of sensitive data. Addressing the media, ZEC Chairperson Priscilla Chigumba said that the 2018 elections could not be rigged as Zimbabwe’s voting system was tamper-proof, for the reason that all citizens’ personal data they had collected under the biometric registration process was housed in a consolidation server. She added that those servers had very strict protection files and un-hackable access level passwords. Despite this statement by the ZEC head, some voters received targeted campaign text messages from the ruling ZANU PF party, sparking alarm that the commission had availed voters’ data to the ruling party. ZEC responded to the allegations by admitting that its database had been hacked.

In an interview, Assistant Professor for Security Studies at the Africa Centre for Strategic Studies, Nate Allen said the problem is not so much the technology itself but the choices that repressive regimes make in employing the technology and for what purposes.

“Naturally, authoritarian regimes are going to be interested in biometric technology for a lot of the wrong reasons, to closely monitor the movements of the political opposition, to harass, detain and potentially intimidate voters and activists, potentially to enable the selective sanctioning or punishment of those who don't adequately support the regime,” Allen told Global Voices.

He noted that one of the biggest problems so far with the roll out of biometrics across Africa is that it is really challenging to collect biometric data on every citizen. “Citizens from the most marginalized groups are the most likely to be excluded, which can have all kinds of second order consequences, from preventing them from voting to denying access to benefits,” he said.

In a study, digital expert and human rights lawyer with the Ethics Institute at Utrecht University Arthur Gwagwa argues that, in the past, the reliance on information security in Zimbabwe was based on overt militarization and securitization of the internet, for example, the involvement of the Israeli Nikuv collaborating with the army in election processes.

However, the recurrent allegations of voters’-roll manipulation appear to suggest more covert embedding political intentions in (biometric) technologies. “The management of the election is mostly civilian-led and under the auspices of a respected former judge who know the importance of adhering to the rule of law. In this case, the rule of law becomes a double-edged sword since the constitution gives the election commission the mandate over election management including the technology aspects,” Gwagwa points out.

The ZEC, for example, has the full mandate to oversee the printing of the ballot paper and this in turn denies the opposition an opportunity to test the ballot paper’s encrypted technological capabilities and security features.

When technologies are adopted in the absence of a solid legal framework and strict safeguards, they pose significant threats to privacy and personal security, as their application can be broadened to facilitate discrimination, social sorting and mass surveillance. Gwagwa points out that, in Zimbabwe, some politically connected parties are on record as having threatened reprisals against people who vote in a certain way since they have access to biometric data and voters’ serial numbers to monitor voting patterns. This pattern of intimidation is more prevalent in rural areas, where large swathes of the country’s population reside.

In an interview with Global Voices, Gwagwa said that, in Zimbabwe, the phenomenon of misinformation, disinformation and hate propaganda may be limited to WhatsApp and at times on Facebook, where the state might throttle broadband to slow down reels that cast the opposition in positive light. “Unlike in the liberal democracies where digital interference threatens democracy, human rights, the rule of law, this can be mitigated through sovereignty and constitutional arrangements. Direct foreign investment’s impact in Africa prevents the realization of those ideals in the first place, the social unity upon which they are founded, and any skeletal constitutional arrangements that there are to mitigate its impact,” said Gwagwa.

Furthermore, Gwagwa says, “Zimbabwe may partially repeat what it did last time or simply borrow from the Cameroon or Malawi tool box, or mix and match to address the threat of the time,” referring to how it conducted the 2018 general elections, through a process called authoritarian sharing and mirroring. This basically refers to how authoritarian governments adopt repressive methods used in similar regimes in order to achieve desired political outcomes.

With the March 2022 by election gone, the 2023 crunch elections will depend on how AI technology will be used, for good, bad or ugly.