Palestinians use various forms of resistance against Israeli apartheid 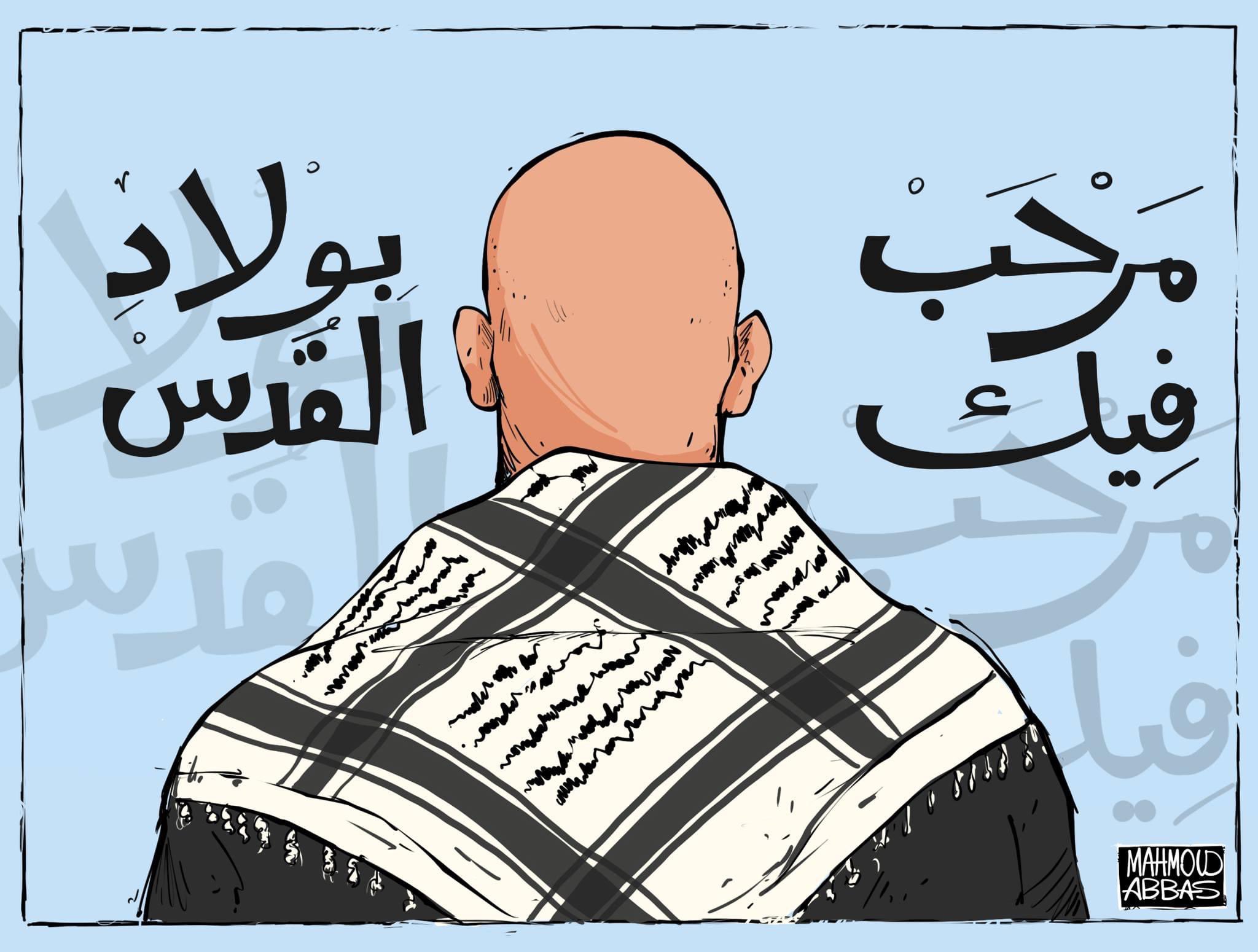 Welcome to the youth of Jerusalem, Cartoon by Mahmoud Abbas, used with permission

In recent weeks, young Palestinian men from the Shu'fat refugee camp, north of occupied Jerusalem, have been shaving their heads to mislead Israeli occupation troops searching for 23-year-old Uday Al-Tamimi, who was suspected of carrying out a shooting attack at a military checkpoint nearby the camp on October 8.

In what has since become known as the “Shu'fat Operation,” the incident resulted in the killing of an Israeli woman soldier and the injury of two others, prompting a full siege by Israeli occupying forces around the camp.

After the Israeli military published a description of the perpetrator as being bald, several young Palestinian men posted an online video of themselves shaving their heads at a barbershop inside the camp, without comment.

Little did they know their act of peaceful resistance would spark a groundswell of grassroots support among young men both inside and outside the camp, as well as across borders, who took to shaving their heads as a non-violent resistance tactic, and in solidarity with the camp's residents.

The Israeli occupation authorities announced that the young man who carried out the armed attack at the Shu'fat camp checkpoint last Saturday, killing a female soldier and injuring three other Israeli soldiers, and who is still at large, is bald. To further mislead the Israelis, all of the camp's young men shaved their heads.

The tactic is reminiscent of Palestinian uprisings between 1936 and 1939, when urban Palestinians abandoned their “tarbooshes” in favour of wearing a “kufiya“ — the traditional checkered-patterned headdress typically worn by “fallaheen” (rural residents) — in an effort to deceive British colonists who were identifying Palestinian rebels originating from mostly rural areas by their kufiyas.

This non-violent method of protest quickly went viral on social media, inspiring various works of art to commemorate solidarity. It also sparked demands for other acts of defiance, such as the deliberate use of Tamimi's first name, Uday, in phone conversations, WhatsApp and SMS messages in an effort to fool the Israeli surveillance machinery in their efforts to locate him.

From the river to the sea, we will shave our heads clean. Ahmad Qaddoura

In an homage to Palestinian cartoonist Naji Ali, this artist incorporated the figure Handala, an iconic symbol of Palestinian identity and defiance.

Palestinians also turned to humour to cope with the grim realities of the situation.

Sadly, the realities in Palestine are far from humorous. In April 2021, Human Rights Watch published a significant report accusing Israel of committing crimes against humanity in the form of apartheid through its institutional discrimination and systematic oppression of Palestinians.

Recent acts of defiance did not sit well with Israeli authorities, whose assault on all types of peaceful Palestinian protests has long been a source of concern in the human rights community.

On October 8, Israeli authorities imposed a six-day lockdown on the Shu'fat camp. Home to approximately 100,000 Palestinian refugees who were forcibly uprooted in 1948 from their native homes and lands in historic Palestine for the establishment of Israel, the camp has since been cut off from the rest of Jerusalem by the Israeli separation wall, rendering it a large prison where Israel controls all points of entry and exit. Throughout the recent military lockdown, camp residents were denied the ability to leave, go to work, visit a doctor, or access basic supplies and services.

In the face of this collective punishment enforced on the camp during the manhunt to capture Tamimi, camp residents launched a civil disobedience campaign.

In a collective “punishment” and revenge obsession, the occupation besieges 150,000 Palestinians in search of the perpetrator of the Shu’fat operation. The West Bank has declared a general strike for tomorrow, and the people of the Shu’fat camp have declared civil disobedience with ongoing clashes. The West Bank is a ticking time bomb that will blow up in the face of the occupation and the security forces that enable it.

Protests gained traction in both the West Bank and occupied East Jerusalem, where a general commercial strike unfolded. This was in response to a call for strike issued by Areen al-Usud (“the Lion's Den”), an armed rebel group consisting of young men from diverse political backgrounds that was recently created in the city of Nablus following the death of 19-year-old Ibrahim al-Nabulsi, another young man celebrated as a local hero. The group has been leading resistance against the Israeli army's attacks on the Jenin refugee camp and the city of Nablus.

Nablus has recently been the site of violent assaults by settlers protected by the Israeli army, and has been subjected to a lockdown similar to that imposed on Shu'afat since October 11. While Israeli authorities relaxed restrictions in the Shu'fat refugee camp on October 13, they remain in effect in Nablus.

Palestinian youth who shave their heads are now subject to 500 Shakel fines and ongoing provocations by the Israeli military, and at least 15 young men have lost their employment as a result of their new hairdo.

Meanwhile, the manhunt for Uday Tamimi came to an end on October 19 after attempting another shooting targeting Israeli guards at the illegal settlement of Ma'ale Adumim, east of occupied Jerusalem. After learning of his death, hundreds of Shu'fat residents flocked to the streets to pay their respects and hail him as a hero.

In front of the house of martyr fighter Uday Tamimi at Shu'fat camp.

The new wave of Palestinian resistance

At the time, Palestinians from the West Bank and Gaza, and Palestinian citizens of Israel united together to protest the displacement of residents from the Sheikh Jarrah neighborhood in East Jerusalem, and attacks on worshipers at Al Aqsa Mosque. This swiftly escalated into an 11-day Israeli attack on the besieged Gaza Strip, killing over 260 Palestinians, including 66 children.

However, the subsequent unified solidarity gave new life to armed resistance in the West Bank.

Since the beginning of 2022, Israeli forces have killed at least 165 Palestinians in the occupied West Bank and Gaza Strip, including 51 Gazans in August during Israel's three-day assault on the strip, in what UNICEF described as the “deadliest year since 2006.”

A new generation that has become increasingly hopeless over the brutal realities of Israeli apartheid now leads the fight. While Palestinians in the occupied territories continue to express sympathy and concern for those young people on the frontlines of the resistance movement, this growing solidarity is helping unite ideologically and physically fragmented communities.