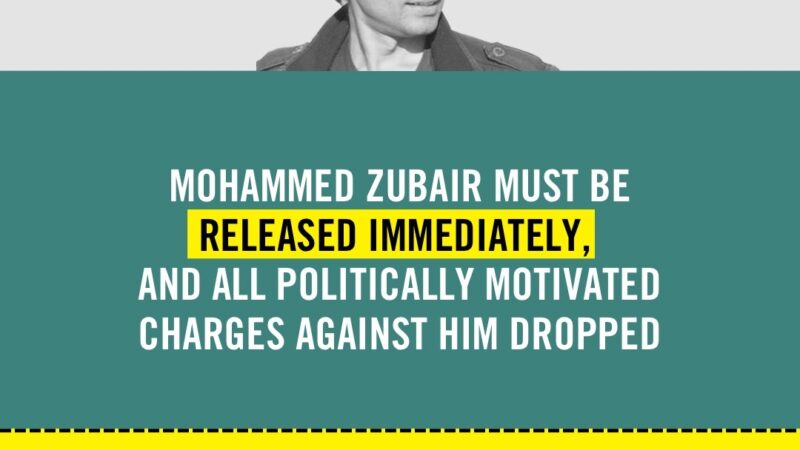 Image from Amnesty International's call for the release of Mohammed Zubair. Used under a CC BY-NC-ND 4.0 license.

In December 2019, protests spread across India against a proposed Citizenship Amendment Act (CAA), and were met with internet shutdowns and violent responses from the state. The CAA fuelled fears of intensified Islamophobia in the country home to the world's third-largest Muslim population. Three years later, socio-political discourse is deeply divided along religious lines, and Muslims are often targeted.

Take the case of Mohammed Zubair, co-founder of India's fact-checking website Alt News. In June 2022, he was arrested for a three-year-old tweet that allegedly hurt religious sentiments. Over the following weeks, additional charges of criminal conspiracy, causing the disappearance of evidence and violating foreign funding rules were also filed against him by the police, new FIRs were lodged for content Zubair had posted, and previous cases were investigated. On July 19, 2022, looking into the matter, the Supreme Court expressed concern about the “vicious cycle” of him getting bail in one case only to be held in another despite the contents of the FIRs filed being “similar” and decided to club the cases together. A day later, the court granted him conditional bail in all cases, rejected the state government of Uttar Pradesh’s plea to stop him from tweeting, and transferred all cases lodged against him in the state of Uttar Pradesh to the capital, New Delhi.

The arrest drew national and international attention raising essential questions about due process, press freedom, the status of free speech, religion, and hate speech in the country. Using data from the Unfreedom Monitor, this article examines how the Zubair case illustrates some of the pertinent undercurrents in India today:

The visibility of religious identities

Many international news organisations, such as the Washington Post, BBC, and New York Times, reported about the arrest. A closer look at the title of the Washington Post article “Indian Muslim journalist, critic of Modi, arrested over tweets” shows that Zubair’s identity as a Muslim was highlighted. In the article, the authors discuss how Zubair was targeted for his religious identity as a Muslim in a predominantly Hindu country, alongside the role of the ruling establishment in growing religious tensions. Others, including Zubair himself, have made similar observations. In an article in TIME, Zubair says, “If you’re a Muslim journalist or a Muslim activist, or for that matter any independent journalist, you could be in trouble.” The authors of the TIME piece agree with this line of argument by providing examples of religious tensions in “Modi’s Hindu Nationalist government,” showing that some of the articles in media organisations seen as traditionally “left-leaning” attribute Zubair’s arrest to his identity as a Muslim. But, for some, the importance of religious identity in the debate is valid for different reasons. An article by Opindia, a digital media outlet that is right-leaning, contests the claims made by BCC and NYT and goes on to label the NYT as “anti-India” and “anti-Hindu” as they ignore Zubair’s “derogatory anti-Hindu posts.”

What’s more, after Zubair’s  arrest, Islamophobic posts filled social media spaces, as his identity as a Muslim became a source of mockery and Islamophobia, reflecting the country's socio-political status quo. Some Twitter users claimed he is linked to Ajmal Kasab, a terrorist caught and executed for his role in the 26/11 terror attack in Mumbai; others claimed he is a Rohinga Muslim who entered India in 2013. As a reaction to the Supreme Court’s ruling granting him interim bail in all cases, Twitter user  @mysterious_tri with the bio “Allergic with AAPtards, Pidis, Pseudo seculars, Woke, Fake Feminist.” (liberals and leftists are often derogatorily called these terms by right-wing supporters) posted the following:

Besides Zubair's religious identity, the credibility of his organisation was also a point of contention, bringing to focus more significant questions about what is concerned “truth” and what is “fake news” in India’s chaotic media ecosystems. Broadly, these questions reflect the concerns about dis/information in the country as a site of control.

The Editor’s Guild of India’s statement condemning the arrest noted:

“This is extremely disturbing because Zubair and his website AltNews have done some exemplary work over the past few years in identifying fake news and countering disinformation campaigns, in a very objective and factual manner… [” Further,]  “…It is apparent that AltNews’ alert vigilance was resented by those who use disinformation as a tool to polarise the society and rake nationalist sentiments.”

Mohammed Zubair’s continuing detention is an alarming reminder that you are not allowed to speak the truth in India. Debunking fake news is not a crime. @zoo_bear must be immediately and unconditionally released. #FreeZubair #ProtectDissent pic.twitter.com/l8lW29oKmf

On the other hand, an article published by Opindia, a popular right-leaning publication, argues that the co-founders of AltNews spread fake news in the name of fact-checking:

Besides their anti-Hindu tendencies, one of the enduring legacies of senior members and founders of leftist propaganda website Alt News is their penchant for peddling fake news. For some time now, Alt News has been at the vanguard of propagating misinformation under the pretext of carrying out “dispassionate” and “neutral” fact-checks that are invariably steeped in partisan prejudices and personal biases.

In another case, addressing a concern raised in parliament about fact-checking and hate speech, the Minister of Information and Broadcasting reportedly said: “It is also important to know who is the fact-checker and who is trying to create tension in the society under the garb of checking facts.” While it is unclear who he was referring to, even as a generic statement, it is interesting to see the distinction he was trying to make.

These cases make it clear that there are differing opinions about what the terms ”fake news” and “fact-checking” mean.

The reactions and subtle usage of language and labelling by and of different actors in the Indian ecosystem symbolise the undercurrents in Indian society. They also show how different actors in the system interact with each other. For instance, as discussed above, reporting traditionally “left-leaning” media drew criticism from right-wing media organisations. The themes of religious identity, dissent, the credibility of institutions, and recognition of dis/misinformation, are not unique to Zubair’s case. Press institutions, termed liberal, are labelled and deemed unworthy of being engaged with. Muslims are targeted in online and offline spaces, sometimes leading to violence. Dis/misinformation are rampant concerns, but so is the categorisation of individuals and organisations as suspect when they question power.