Global Voices Advocacy's Netizen Report offers an international snapshot of challenges, victories, and emerging trends in Internet rights around the world. This week's report begins in Somalia, where the nation’s two main ISPs—Hormuud Telecom and Nationlink—have caved to demands from Al Shabab that they block Internet access in central and southern Somalia. Company officials, who tried in vain to negotiate with the terrorist group, believe the threat originated from the highest ranks of the organization. In a statement issued by radio, the group warned that any institution or individual who violates the ban will be “considered to be working with the enemy and…will be dealt with in accordance [with] Sharia law.” Observers suspect that Al Shabab leaders are forcing the ban out of fear that the Internet will aid authorities and other actors in tracking their movement and activities. Although just over 1% of Somalis use the Internet, mobile 3G is increasingly popular in urban areas.

A new media law in Kenya could leave bloggers and independent journalists facing sky-high fines over infractions on an impossibly vague series of provisions. Local bloggers are warning that the law’s broad definition of who is considered a “journalist” — one that could apply to bloggers, citizen reporters, and even social media users — will have a chilling effect on independent reporting across the country. The legislation enables government-appointed judges to issue fines of up to KSH 2 million (US$23,310) for media institutions and up to KSH 500,000 (US$5,827) for individuals.

Two individuals selling pirated copies of Hollywood blockbuster “The Wolf of Wallstreet” were arrested last week not for piracy, but for the film itself, which has been banned by Kenya’s Film Classification Board. A flurry of comments criticizing the ban has since appeared on the Board’s Facebook page.

The largest Internet blackout in Chinese history was most probably caused by the country’s notorious “Great Firewall”. Internet monitoring companies suspect that Chinese censors mistakenly re-directed the entire country’s web traffic to servers belonging to a company called Sophidea, which appears to be located in the US. The company’s servers reportedly crashed under the load for approximately eight hours. Greatfire.org offered a technical analysis of the event, pointing to potential explanations for the error.

The Ukrainian government targeted Euromaidan protesters last week with a deluge of mobile SMS messages reading: “Dear subscriber, you are registered as a participant in a mass disturbance.” Although a brand new local law criminalizes participation in violent protest, the messages had little effect in stemming violent clashes with riot police. Three Ukrainian cellphone companies have denied any involvement in the effort, noting that the government may have pirated protesters’ data from nearby cellphone towers.

A Kuwaiti court sentenced Twitter user Abdullah Fairouz Abdullah Abd al-Kareem to five years in prison after being found guilty of insulting the Emir over the social network. Local law prohibits any message that “objects to the rights and authorities of the Emir or faults him.” Al-Kareem will soon appeal his case before a higher court.

Uyghur economics professor Ilham Tohti, founder of Uyghur Online and an advocate for autonomy in the ethic minority region of China was arrested last week, allegedly for promoting a separatist agenda, though he does not actually support this platform. Despite an online petition signed by more than 1,000 Chinese intellectuals and an appeal by the US State Department, Tohti remains detained. His family is under house arrest, and seven of his students have been questioned by local authorities.

The Indian government is once again stepping up its ability to intercept and spy on citizens’ online communications. Earlier this month, officials announced the launch of the NETRA spy system intended to monitor keywords in all major forms of online communication — email, social networking platforms, VoIP, chat, and online forums — in real time. There will be no judicial oversight of NETRA activities and Internet service providers will have no involvement (or knowledge) of government snooping via NETRA.

A new rule requires Chinese netizens to use their real names when uploading videos to Chinese websites. The government says the measure is intended to “prevent vulgar content, base art forms, exaggerated violence, and sexual content…having a negative effect on society.”

The challenges the Internet poses to national sovereignty were highlighted this week around a battle between China and Taiwan for control of the top-level domain (TLD) .政府 (the Chinese character equivalent for .gov). The Chinese government complained to the Internet Corporation for Assigned Names and Numbers (ICANN) after a Taiwanese government-affiliated company submitted an application for the TLD, arguing that the company, Net-Chinese, isn’t “vested with the authority or mandate to endorse claims of government status on behalf of all governments.”

The Vietnamese government’s enthusiasm for censorship is well known, but the country’s sketchy pro-government hackers are targeting even non-Vietnamese people with malicious phishing campaigns. According to the Electronic Frontier Foundation, recent targets include a US-based blogger who operates a popular dissident website, a British journalist based in Hanoi, a France-based Vietnamese math professor and democracy activist, and an American activist. Although it lacks China’s advanced censorship capabilities, Vietnam’s authoritarian regime has admitted employing 900 people “to counter online criticism.”

Bloggers, activists, journalists, and artists from across the Arab region gathered in Amman, Jordan last week for the 4th Arab Bloggers Meeting, organized by Global Voices and 7iber. Over four days of training, collaboration, discussion and debate, the group issued calls for the release of imprisoned rights advocates Alaa Abd El Fattah in Egypt and Bassel Safadi in Syria, along with kidnapped Syrian human rights advocate Razan Zeitouneh. 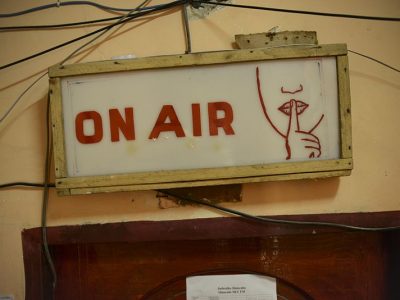