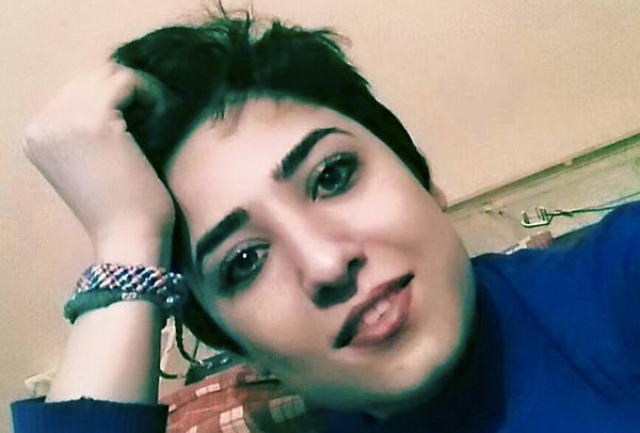 Jailed cartoonist and activist Atena Farghdani has been on a hunger strike in protest of verbal abuse in jail. Photo from ICHRI.

Artist and civil activist Atena Farghadani, behind bars since January 10, 2015, has been on a hunger strike in Evin Prison throughout September in protest of ongoing verbal abuse by prison staff. Her mother Eshrat Ardestani told the International Campaign for Human Rights in Iran she required urgent medical care when her blood pressure dropped during her protest.

“Atena was looking really bad when we visited her on September 13, 2015. She could barely walk and could not stand on her feet. Then we realized she had been on a dry [refusing water as well as food] hunger strike for three days. On the fourth day her blood pressure had dropped so low that they had to take her to the clinic on [a makeshift stretcher made of] a sheet,” Ardestani said.

Asked why Farghadani had refused food and water, her mother said prison staff had been repeatedly abusing her verbally, suggesting she has had sexual relations with her lawyer, Mohammad Moghimi.

Moghimi was detained for four days on June 13, 2015, after shaking Farghadani’s hand during a prison visit and charged with “non-adultery illegitimate relations.”

“They have tarnished my daughter’s reputation in prison. They are playing with her integrity with their [ugly] words. Atena has been facing all this abuse and mistreatment for more than a year,” Ardestani added.

Atena Farghadani, the recipient of the 2015 Courage in Cartooning Award by the Cartoonists Rights Network International (CRNI), was sentenced on June 1, 2015, to 12 years and nine months in prison after drawing a cartoon that showed members of the Iranian Parliament as animals and posting it on her Facebook page.

The charges against her were “assembly and collusion against national security,” “propaganda against the state,” and “insulting” the Supreme Leader, the President, Members of the Parliament, and the Revolutionary Guards agents who interrogated her. Her case has been sent to Branch 54 of the appeals court.

Farghadani has also developed signs of lymphatic disease during her imprisonment.

“Atena has lost everything as a young university honor student in prison. She has nothing more to lose. All this psychological torture against a young imprisoned girl is unnecessary. Why do they have to make life difficult for her even in prison?” her mother said.

For more coverage of Atena's case: