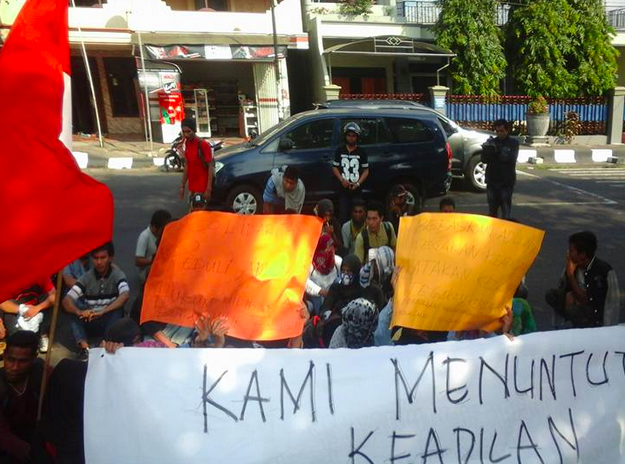 Supporters of Adlun Fikri. Photo shared by @FRIENDZITIndonesia on Twitter.

A university student in Ternate in the North Moluccas Islands of eastern Indonesia, is currently being detained for uploading an amateur video that shows a traffic cop trying to extort him for money after stopping him for a routine traffic violation.

According to a student news portal, Kabar Kampus, Adlun Fiqri was charged with defaming a police officer and the police as an institution, under Indonesia's Electronic Transaction and Information Act.

On Twitter, concerned citizens are tweeting about his arrest using the hashtags #saveadlunfiqri and #saveadlun.

This is for Adlun Fiqri, in solidarity for his release.

Don't underestimate those who are voicing the truth.

Is defamation the reason for Adlun's arrest or was he arrested for revealing facts about police [behavior]?

His viral video is no longer accessible on YouTube or Facebook. Google has catalogued countless amateur videos about Indonesian traffic cops’ extortions, however, this is the first time the uploader has been prosecuted under ITE law. Indonesia's UU ITE chapter 27 (III) is infamous for being used to curtail freedom of speech and silence political opponents.