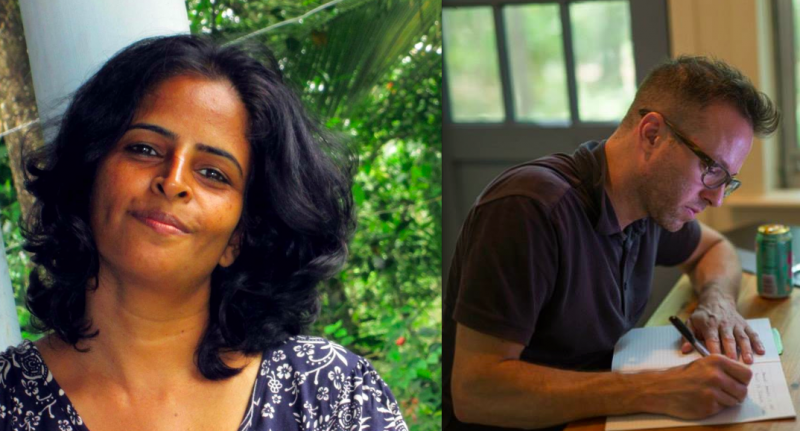 My friend Sands Fish is a data scientist and a grad student at MIT, and, like most people in his demographic, he uses Facebook. But Sands took an unplanned break from the platform this summer when Facebook sent him an automated message formally requesting that he verify his name with the company, or risk having his account suspended. Indeed, Facebook requires people to display their “real” names on their profiles.

The unusualness of Sands’ first name, especially in combination with his last, seemed to have sent Facebook's name verification robots (likely some form of artificial intelligence) the wrong signal, and suddenly he had seven days to submit some form of state-issued ID or lose access to his account. After a few weeks of frustration, Sands complied and sent the company a scan of his driver’s license, proving that “Sands Fish” was not some maritime-flavored in-joke, but in fact is his legal name. His account was reinstated.

Several thousand miles away, in India's southern state of Kerala, a woman named Preetha G had a similar experience. A writer and outspoken feminist, Preetha has 27,000 followers on Facebook. She regularly comments and debates issues of gender and politics on the platform, and is one of many Indian women who see Facebook as space for expressing themselves that they do not have in public life. Kerala-born blogger Inji Pennu, who now lives in Florida, describes Facebook as:

…To us Indian women where we are not safe even in broad daylight, to walk a mile without being groped or flashed, where even being born a female is by extreme luck, Facebook is a welcome distraction…a place where we could gather around with other women and tell the world, I do not want men to grope me while going to school, I do not want men to tell me what to do at offices, I do not want my parents to give me off in a wedding…The few women who got lucky enough to start using Facebook screamed in such loud voices other women started to listen, they brought in their friends. We finally had a space. We started to exist.

In late July of 2015, a politician in Kerala proposed a ban on women wearing jeans. Preetha was outraged. She started talking about it on Facebook, organizing an opposition. And then the trolls came, piling on harassment and calling her nasty names. She'd dealt with this before. But then something new happened. Her account was suspended, and she received the same message that Sands had just a few weeks earlier.

Like Sands, Preetha was accused of violating the “real name” policy. But it wasn't a robot that reported her. It was another user—perhaps one of the people who had been harassing her. Unlike Sands, she had no grace period, no time to react. With no warning, she was instantly locked out, silenced in the place where she was once most able to speak freely.

“We will choke you”

Then things got worse. A “Preetha the Prostitute” page appeared on Facebook, featuring doctored images of her in provocative clothing, drinking, and smoking—things that can bring a woman all kinds of trouble in her part of the world. Commenters on another page threatened to hurt her son.

Without access to Facebook, she couldn't respond to these attacks. Other women began to stand up for her, and similar things befell them. When Inji Pennu spoke up about it, she got a message from another user telling her to shut up. “We will choke you on Miami Beach,” the user wrote. Preetha couldn't let this continue. She sent Facebook a scan of her state ID.

The thing is, Preetha had not violated the real name policy. She'd used the name she “uses in real life,” as Facebook requires. And she was not alone. Thousands of other Facebook users, ranging from Native Americans to clergy members to transgendered people, have found that Facebook’s real-name policy does not extend the definition of “realness” or authenticity to include their unquestionably real identities and life circumstances. These and many other communities have pressed upon the issue with the company for years, to little avail.

Thousands of other Facebook users, ranging from Native Americans to clergy members to transgendered people, have found that Facebook’s real-name policy does not extend the definition of “realness” or authenticity to include their unquestionably real identities and life circumstances.

In real life, she leaves out her surname, which indicates social caste. Also known as a caste name, this stands as a marker of India's technically abolished but still very powerful system of social hierarchy.

When Facebook reinstated Preetha's account, her full name appeared on her profile, caste name and all. Some castes are more vulnerable than others. My South Asian colleagues have explained to me that a move like this can give your enemies license to treat you as badly as they like, with impunity. Similarly, police are unlikely to respond to a call from a person of a low caste.

After three weeks of sending urgent requests and pleas to the company, and a series of phone calls between Facebook employees and community members at Global Voices, where Inji and I both work, Preetha's account name was reinstated as she likes it. But for her, this is not really the end of the story. It is ongoing. The Internet has a long memory.

The social media equivalent of stop-and-frisk

Whoever reported Preetha used Facebook's “report abuse” button as a tactic, a mechanism of silencing. And it worked. Facebook prioritized the attacker’s speech rights over those of the person being attacked. I later learned that Facebook does not evaluate reports like these within the context of recent events and communications between the two parties involved. For example, if the person who filed a name violation report against Preetha was the same person who created the “Preetha the Prostitute” page, this would have had no bearing on Facebook's actions. When the company receives a name violation report, it automatically asks users for ID.

Many of Facebook's moderation techniques rely either on artificial intelligence or on reports from the “Facebook community.” But that second concept is a bit like McDonald’s declaring itself a “community of hamburger eaters.” There is nothing in particular that ties Facebook users together, aside from a basic, unremarkable pleasure that human beings take in connecting with one another. Facebook has “Community Standards,” a term that gives the impression that we all made them up together, or that they somehow naturally evolved from some shared agreement on what is right and good. It is from Facebook’s Community Standards that users first learn that “when people stand behind their opinions and actions with their authentic name and reputation, our community is more accountable.”

Facebook has “Community Standards,” a term that gives the impression that we all made them up together, or that they somehow naturally evolved from some shared agreement on what is right and good.

The treatment that Sands and Preetha received from Facebook invites comparison with being (truly) randomly searched at the airport or carded at a liquor store. But it is actually more akin to profiling, a social media equivalent of stop-and-frisk. Preetha's effort to shed a marker of social class—a proxy for her relative worth as a human being, in the eyes of an antiquated social system—was upended by Facebook's system. The abuse came from another user, but it was the cultural blindness of Facebook's policies that made this possible from the start. And when Preetha explained to the company what had gone wrong, it took far too long for it to pay attention and do something about it.

There are, of course, scenarios in which the use of one's legal name does increase accountability. Facebook has many reasons to stick with this policy, and this is one of them. But more than this, I believe the real name policy is about business. It would be unfeasible, with Facebook's terrifyingly large user base, for the company to check ID at the proverbial door, but not enforcing a real-name policy would also undercut the essence of Facebook's business model. We all know that Facebook makes most of its money from data that it sells to advertisers. Part of what makes this data so valuable and powerful in the global data economy is that it seems, in large part, to be tied to “real” people. Since Facebook cannot actually verify the identities of all of its users, it instead exercises a combination of machine and user-driven social control, a sort of performance of cross-platform verification. While a few users may leave on account of their policies, far more opt to follow the rules for fear of losing the benefits that Facebook brings them.

This situation challenges things we like to put faith in—technologies that connect us, the wisdom of the crowd, the power of free speech.

Maybe you don’t relate to Preetha but you do relate to Sands. Maybe the real name policy will never create, for you, an inconvenience or a life-changing experience of risk and fear. But it is clear that Facebook's technologies and policies have a long way to go before they can fully understand and appreciate the responsibility that they carry when they decide to dictate what and who is “real” in the world.

In the aftermath of these events, Global Voices community members worked with advocates from India’s Internet Democracy Project, Digital Rights Foundation of Pakistan, the ACLU and the Electronic Frontier Foundation to draft an open letter to the company demanding concrete changes in the way this policy is implemented. Although it seems to be turning heads, we know there is a long way to go before these problems are behind us.