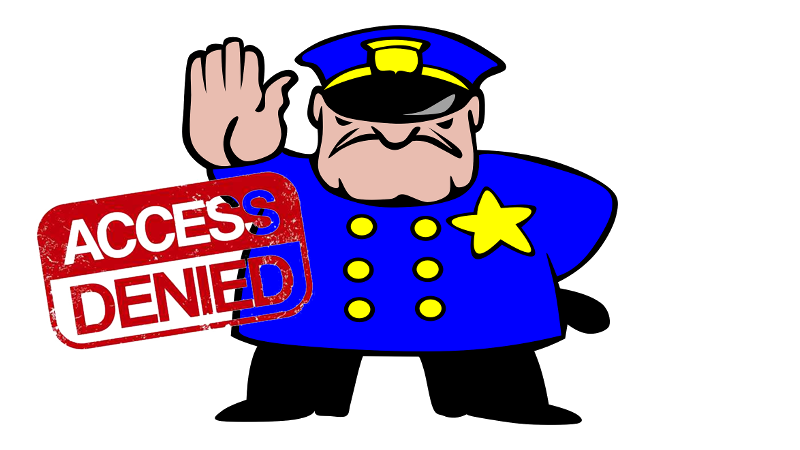 When Ukraine's Interior Minister announced the initiative to form a new cyberpolice unit on October 11, the focus of the media coverage—and of Minister Avakov's statement—was very much on fighting online crime and beefing up the information security practices of the Ukrainian government. The launch was touted as successful, with over three thousand Ukrainians applying to join the cyberpolice force in the first 24 hours after the announcement. But amid the robust response to plans for the cybercrime unit, an arguably less popular element of the initiative flew under many Ukrainians’ radars.

Along with other measures to improve information security, the Ministry plans to establish a registry of websites and webpages blocked for distributing “forbidden content.” 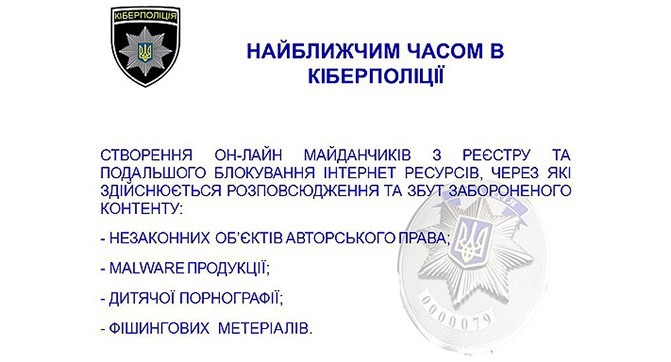 A slide from the Ukrainian cyberpolice launch presentation. Image from mvs.gov.ua.

Coming soon in the cyberpolice
The creation of online platforms for registration and further blocking of Internet resources that are used to distribute and share forbidden content.

The presentation slide featured above, which was published on the Interior Ministry's website, indicates that websites featuring pirated content violating copyright, child pornography, malware and viruses, and phishing content will be listed on the banned website registry. It's unclear whether social media websites, where any user can potentially upload these and other kinds of content, will bear the brunt of responsibility for these materials — they could be blacklisted and blocked in their entirety, or authorities could take a more nuanced approach, blocking only the pages with prohibited content. It is also unclear whether the cyberpolice forces will be required to seek court approval in order to add a site to the blacklist and subsequently block it, or if the blockings will occur extrajudicially.

The Internet blacklist mechanism is already broadly used in Russia, where many websites, media outlets, and social network pages have at one time or another ended up on the registry. RuNet Echo has covered many of these cases, where webpages were banned for anything from obscenities and celebrity memes to “extremist content” (a vague category that includes, for instance, this anti-fascist Disney cartoon). Wikipedia, Lurkmore, Facebook, VKontakte, YouTube, and Google+ have all appeared on the RuNet blacklist. RosComSvoboda, a Internet rights initiative monitoring content restrictions on the RuNet, estimates that hundreds of thousands of webpages with unquestionably legal content regularly end up on the blacklist due to vaguely worded laws and inconsistent implementation of the laws by regulators.

The self-proclaimed separatist Donetsk People's Republic in eastern Ukraine also got its own Internet blacklist in June 2015 to restrict access to pro-Ukrainian websites with “content banned in the republic.”

In January 2014, in the midst of the Euromaidan protests, Ukrainian lawmakers passed laws restricting online public space and introducing web blocking, along with a string of other measures limiting free expression and civic activity. The set of laws, ostensibly aimed at cracking down on the protesters, in many ways resembled similar Russian legal norms. Then-president Victor Yanukovych even signed the laws into effect, but the new norms angered the Euromaidan protesters and caused an uptick in protest activity, ultimately resulting in Yanukovich's exit and the repeal of the restrictive anti-protest legislation. Given Ukrainians’ reaction to the 2014 laws, the newly proposed banned websites registry is unlikely to get an enthusiastic response from Internet users.