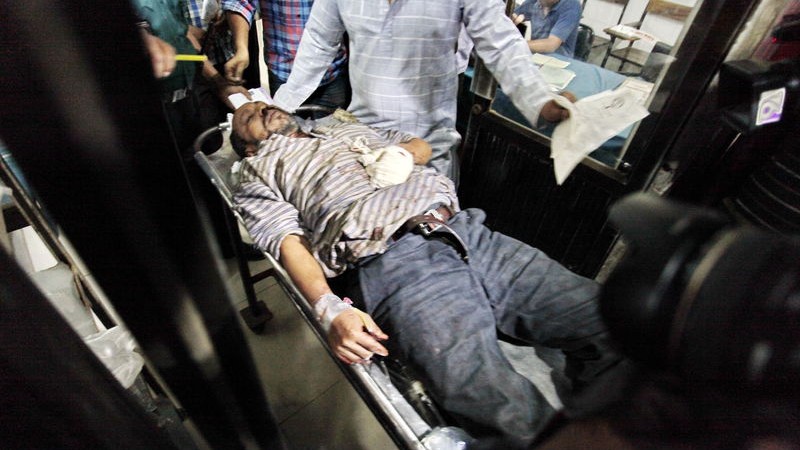 An injured blogger is being taken to the hospital. Extremists attacked three bloggers in the office of Shuddhoshor Publications in Dhaka, Bangladesh. Image by Khandaker Azizur Rahman. Copyright Demotix (31/10/2015)

Two publishing houses in Dhaka, Bangladesh suffered brutal attacks on October 31 by armed assailants who took the life of one man and left two others in serious condition. In the wake of four assassinations of secular bloggers in Bangladesh this year alone, the attacks represent an increasingly powerful vector of threat against progressive, secular intellectuals in the country.

Both publishers had ties with Bangladeshi-American blogger and author Avijit Roy, who was attacked and killed while walking with his wife, Rafida Ahmed, in February 2015. Ahmed, who was badly injured in the attack, has since criticized Bangladesh's government for inaction and described the attack on her husband as “well planned, choreographed – a global act of terrorism.”

It remains unconfirmed who carried out the attacks on October 31, 2015. In the first incident, a gang of five or six assailants entered the office of Shuddhashar Prokashani (Pure Voice Publication) at Shyamoli, claiming to be customers. Using machetes and a gun, they attacked Ahmedur Rashid Tutul and two other writers (also bloggers) Ranadipam Basu and Tareq Rahim, who were present at the time. The attackers locked the office from the outside and fled.

Ranadipam described the attack on Facebook, just moments later. The police arrived soon after and the men were rushed to the hospital. As per his latest report, Ranadipam has been released. Tutul and Tareq remain hospitalized and are under close observation.

Ahmedur Rashid Tutul had published multiple books written by Avijit Roy. He reported earlier in the year that he received threats two days after Roy's death in February. 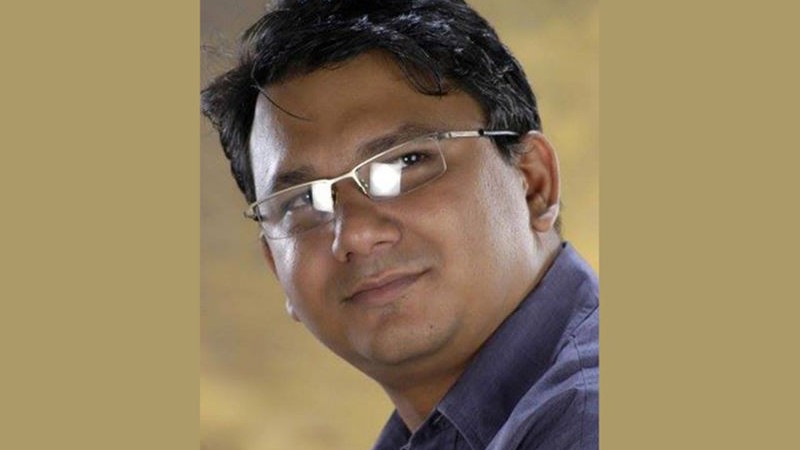 Faisal Arefin Dipan, a publisher of the slain writer-blogger Avijit Roy was hacked to death hours after another publisher of Roy was attacked in Dhaka City. Image by SK Hasan Ali. Copyright Demotix (31/10/2015)

Approximately three hours later, the body of Faisal Arefin Dipan, who ran the publishing business Jagriti Prokashony, was found dead in his office in Aziz Supermarket at Shahbag Square. Similar to the first incident, the killers locked the office and fled. Dipan was soon found by police and his father, who rushed to the office upon learning of the earlier attack. Dipan was found lying in a pool of blood, with deep cuts in his neck and upper shoulder.

Jagriti Prokashony had published Avijit Roy's popular non-fiction book Biswaser Virus (Virus of Faith), which described violent religious extremism as a “virus”. The book was very popular with rationalists and freethinkers, but drew much criticism from the Islamist radicals, who claimed it promoted atheism.

Reflecting on the work of his contemporary, blogger Arifur Rahman writes about Ahmedur Rashid Tutul:

Ahmed is fearless in a sense, when Bangladesh is consistently sliding down the path of religious fanaticism, Government itself was banning books, he is hell bent on continuing to publish progressive and secular books. In the toxic and fearful atmosphere of curbed freedom of speech, his efforts in keeping the free thought alive is cherished and loved by so many! [..]

When his peers in publishing industry was afraid to publish books that could potentially ‘harm religious sentiment’, Ahmed continues to push the envelop and thereby helping to keep the dying candle of free speech in Bangladesh. 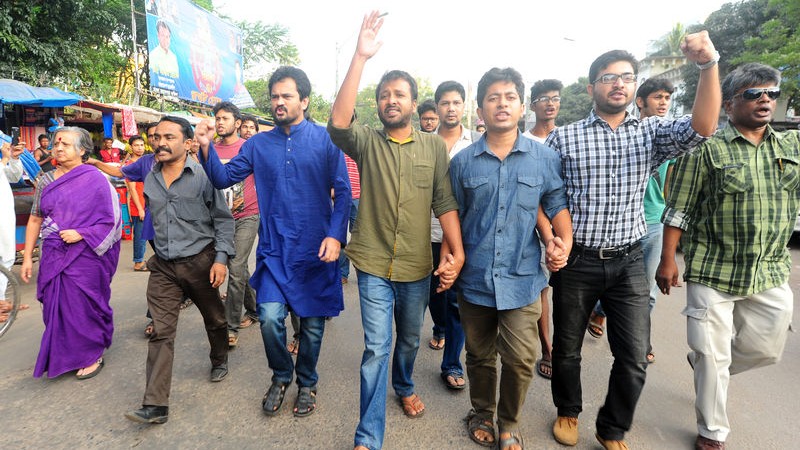 Protest in Dhaka after the attacks on the publishers. Image by Khurshed Alam Rinku. Copyright Demotix (31/10/2015)

The right to free expression is enshrined by Bangladesh’s constitution and international human rights doctrine to which Bangladesh is party. Atheists have the same rights as other citizens in Bangladesh. Under national law, any person who has a “deliberate” or “malicious” intention of “hurting religious sentiments” can be prosecuted. Yet Bangladesh’s secular government has done little to discourage these attacks or bring killers to justice.

The now seemingly routine attacks have taken a tremendous toll on the voices of writers and bloggers in the country. Ekush Tapader writes on Facebook:

No established writer will condemn the killing, or return their awards in protest. Their ideological state is worse than the Islamist extremists. The bloggers could build a protest. If they could rally again and occupy like the #Shahbag protests. But they are divided, afraid, scattered… such a bad time for us.

For attackers, impunity is the norm

After today's incidents, the police uttered what has become a typical refrain following such attacks: “The attackers could not be identified. Investigation is underway.”

In 2013, a group of conservative Muslim clerics submitted a list of 84 names of bloggers to a special government committee, accusing the bloggers of “atheism” and writing against Islam. Government officials responded by blocking critical websites and making arrests, of bloggers and leaders from the religious right, at the height of #Shahbag protests in 2013. Bangladesh's climate for free expression has become increasingly untenable for anyone critical of religious extremism.

The government, the judiciary, and police forces have taken no effective measures to deter extremists from targeting the bloggers and the publishers.

We know what comes next because we’ve seen it before. In a few weeks or months, police and media will perform a merry dance, arresting and parading a few different groups or individuals detained in connection with the latest attack. They’ll parade someone for the cameras. Then there will be no trial, no true justice. And the same thing will happen again and again.

How many more times must we see these bloody and callous acts of hatred before the authorities wake up to the true problem. Officials must stop threatening to arrest, and stop blaming atheists themselves for writing books and blogs. To victim-blame them will continue to empower the fundamentalist killers and undermine the very basis of secular democracy itself.

Though there are many similarities with earlier outrages, today’s coordinated attacks may represent a significant emboldening and an up-step in the campaign to terrorize and silence the voices of humanists, atheists and secularists. The Bangaldeshi authorities must now accept that their failure to achieve justice and the appeasement of fundamentalist violence is not working, and is costing life after life.