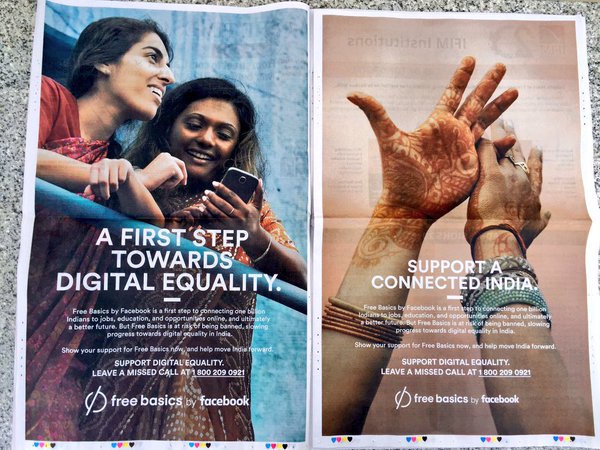 Netizens in India rang in 2016 amid burning controversy over net neutrality regulations that could lead to a permanent ban on Facebook’s Free Basics app, which offers free access to a limited number of websites (including Facebook and Facebook-owned products like WhatsApp) for users who do not pay for mobile data plans. The app was suspended in India on December 23 shortly after the country’s Telecom Regulatory Authority began proceedings on net neutrality and differential pricing that call its legality into question.

Open Internet advocates argue that Free Basics undercuts consumer choice and violates net neutrality principles, which require users have equal access to any website they want to visit — and that all websites have equal technical capacity to attract visitors. In India, the volunteer coalition SavetheInternet has been a leading driver of efforts opposing Free Basics.

Facebook responded to the suspension with an aggressive ad campaign both online and off, purchasing a smattering of billboard advertisements across the country and numerous two-page ads in leading national newspapers. In recent weeks, Facebook users across India (and some in the US) been greeted on the site with notifications urging them to send an automated email to the regulatory authority (known as TRAI) supporting Facebook’s case.

Facebook’s campaign has been further complicated by the fact that the text of the automated campaign email does not actually answer the regulatory questions that TRAI posted for public comment. On January 3, The Indian Express reported that TRAI has since asked that the estimated 5.5 million people who have sent these emails write to them again, with “specific replies instead of the generic template decided by the social media site.”

Not long after Free Basics was suspended in India, the app stopped working in Egypt on December 30, for unclear reasons. Etisalat, the local telecommunications company that partnered with Facebook to provide the service, says that the service simply terminated when the two-month contract expired. Some media and commentators speculate that the app was shut down in anticipation of the upcoming January 25 anniversary of the 2011 protests that overthrew former president Hosni Mubarak, in an effort to stifle activist activity on the social network. If the reason is not simply contractual, it is worth noting that Egyptian authorities have been known to shut down communications networks when faced with rising political tensions (which might involve actions by human rights advocates) and fears of violent extremist groups exploiting networks for their own benefit.

Yet local experts note that with over 18 million Egyptians already using Facebook over paid Internet connections or data plans, closing one avenue to the social network would have limited impact on broad scale political organizing.

The Vietnamese government announced plans to tackle social media criticism of its Communist Party ahead of its five-yearly congress this month. On its Facebook page, the government said users can anticipate an increase in “toxic” activity online. Though it’s unclear what measures it plans to use, the country has restrictive regulations for social media platforms such as Article 258 of its Criminal Code, which punishes the “[misuse of] democratic freedoms to attack state interests and the legitimate rights and interests of collectives and individuals” with up to seven years in jail in “serious circumstances”.

Ethiopia: “The government should arrest people who press the ‘like’ button”

Since student protests over land rights erupted in Ethiopia last November, numerous mobile phone videos and images have gone viral on social media, giving a glimpse of the government's brutal crackdown on demonstrators. According to Human Rights Watch, violent assaults by state security forces have resulted in at least 75 deaths. Pro-government commentators on a state-run TV program asserted that all images and video being shared on social media are “fake” and suggested that the “government should arrest people who press the ‘like’ button or ‘share’ such materials.”

Printers in Pakistan censored a front-page article on the violent killings of secular bloggers in Bangladesh from the international edition of the New York Times. The Times’ Pakistan correspondent flagged the omission in a tweet showing the physical copy of the paper with noticeable white space and the online version with the article.

The printing partner of New York Times in #Pakistan removes an article. Readers get white spaces on two pages pic.twitter.com/ccjFvWtorj

Global Voices has reported extensively on the wave of brutal violence against bloggers in Bangladesh: Over the course of 2015 four bloggers were assassinated and publishers at two separate houses, both of which had worked with targeted bloggers, were attacked by armed assailants.

Bangladesh introduced new mandatory biometric registration rules for all SIM card owners. Owners will be required to verify their identity by providing their fingerprint, which will be checked against a national identity card database. The scheme will create a massive database of citizens’ communications data that could give the government unprecedented access to the mobile communications of Bangladeshi citizens.

A Russian activist was given a two-year prison sentence for making “public calls to separatism and extremism” on social media for her comments on the conflict between Russia and Ukraine, while another blogger was given a five-year prison term for “inciting hate” online for videos he posted to YouTube and Vkontakte about the conflict.

Russian media regulator Roscomnadzor launched a new system that automatically scans online media for forbidden and illegal material. The system, which is already active in 19 regions of the country in its beta testing mode, will be rolled out full-scale across Russia before the end of the year. It primarily targets online materials covered by Article 4 of Russia’s mass media law, which covers pornography, calls to violence or terrorism, extremist materials and profanity. Once a violation is identified, Roscomnadzor issues a warning to the media outlet if it is a first-time offense. After a second warning, the agency can take the matter to court and demand the media outlet’s license be revoked, according to the law.

Index on Censorship will honor journalists, media organizations and advocates for free expression with its 2016 Freedom of Expression Awards. The long list of nominees includes Global Voices author Arzu Geybullayeva for her work reporting on Azerbaijan, Egyptian blogger Alaa Abd El Fattah, Ethiopia’s Zone9 Bloggers, the #Justice4Morocco campaign, and Global Voices for its campaign to free the Zone9ers. The short list of nominees will be announced on January 16.