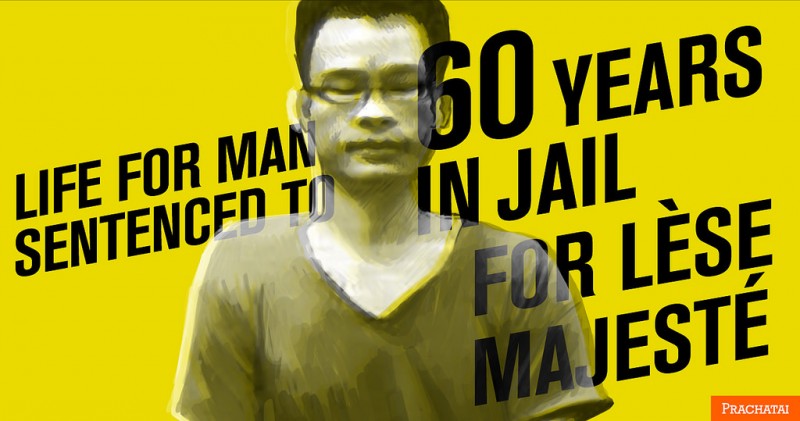 This edited article is from Prachatai, an independent news site in Thailand, and is republished on Global Voices as part of a content-sharing agreement. The article was written by Metta Wongwat and translated into English by Andrew Alan Johnson. Thailand's anti-royal insult law is seen by many scholars as outdated and repressive but the military-backed government insists it is necessary to protect the monarchy.

When Phongsak S. was handed a 60-year prison sentence for six messages he posted on Facebook, he broke a new record for the most severe punishment under Thailand's lèse majesté (anti-Royal Insult) law.

Phongsak, who used the name “Sam Parr” on Facebook, was convicted by a military court under Article 112 of the penal code (lèse majesté) and Section 14 of the Computer Crimes Act on August 7, 2015. After he pleaded guilty, Phongsak's sentence was reduced by half.

Who is Sam Parr?

Originally from Kanchanaburi Province, Sam (Phongsak) grew up in a typical lower-class farming family. He was only formally educated through Mathayom 3 (9th grade), but learned English and French on his own. He left home when he was still a teenager, looking after himself from then on.

As a young man, Sam worked in the tourism industry, as a manager of several hotels and restaurants, and as a freelancer in arranging tours for various agencies. He lived for a year in Morocco, working in a guesthouse with some of his foreign friends for a year. During that time, he traveled to various European countries before returning home to care for his ailing father.

About his overseas experience, Sam said:

What I’ve seen in other countries is real development. Equality. It made me question why Thailand is still so poor, and why the poor in Thailand are so repressed.

This question of inequality stuck with him as he saw more of the world, despite the fact that he came from a relatively conservative political background.

The crackdown in 2010 marked an important turning point for Sam. This came during the tourist low season, giving Sam more time to spend on the Internet, closely following the news. The loss of life of so many people was terribly shocking to him, and led him to become more and more interested in politics. He began to question things more deeply and began to read more and more, especially reporting in English about Thailand’s political history.

Shortly after 2010, Sam’s father died, and Sam returned home to care for his mother, who was 84 years old and unable to walk. With this heavy responsibility, he was unable to join a political group. But what he could do from home was engage in political discussion on social media. There, he referred to himself as an “independent unit,” and met a number of new friends who had viewpoints very similar to his own, friends he knew online but whom he’d never met in person.

After the 2014 coup, his posts became increasingly strident, up to the point that friends worried about his welfare urged him to leave home. He did so, going to live with friends he had made on Facebook. Later, after Sam’s arrest, his friend was detained by the military, with Sam’s presence strengthening the case made against him. Sam says that it was this fact that most upset him.

In the wake of the coup, the questions that he posted on Facebook grew increasingly angry and rude. Sam made a number of posts while drunk.

I am so resentful that innocent people were shot dead. The image of these bodies is so clear in my mind. When I think of them, I get so angry that I cannot control myself. And it was even worse when I was drunk.

If there was something that I regret, it is that I was not careful in what I was saying. I should have posted better-researched information, using facts instead of feeling.

Ambushed at a bus station

Phongsak was arrested on 30 December 2014 at a bus station in Phitsonalok Province. Both military and police officers were present in large numbers.

Sam has a strong suspicion that at least one person that he connected with on Facebook was in fact an officer who disguised himself and chatted with him to lure him. This person even sent him gifts, including a mobile phone.

He had been speaking with this person on Facebook for four to five months when they finally arranged to meet in person, in Tak Province, the alleged hometown of the person. While Sam traveled to meet the person, the disguised police constantly asked him where he was at each stage.

Sam was imprisoned in the army camp for five days before being taken to the police and it was officially announced that “Sam Parr” had been arrested.

He was imprisoned there for a total of eight months until his conviction on 7 August, 2015.

Now in his mid-40s, Sam has a lively sense of humor and an outgoing, flamboyant personality. He is fond of speaking English with people who visit him in prison.

Speaking about the harsh nature of his sentence, Sam said that he is a person who adapts to new circumstances quickly, and has resigned himself even to the prospect of dying in prison. He said he was heartened by the thought that his experience could be taken as an example that Thais could learn from, and by the moral support received from his fellow inmates.

Sam was still smiling when he spoke of his own gloomy future. But as he spoke of historical times of suffering and loss, his tears began to fall and his voice quavered.

Phongsak allegedly published six posts, including photos and accompanying text, on Facebook under the name “Sam Parr.” These were ruled to be in violation of the lese majeste law. These six actions were:

All of these images and text were in Pongsak’s computer until the day that he was arrested, when they were taken by the military under Declaration 37/2557, which orders that all cases of Article 112 to be military jurisdiction. As AFP notes, local and international media alike routinely refrain from quoting text or republishing images from posts like these, as even repeating these details could mean breaking the law.

According to the indictment, the military prosecutor stated that the posting of pictures and text defamed the monarchy and Article 112 of the penal code, and that the charges also constituted the misuse of a computer system according to Section 14 of the Computer Crimes Act.