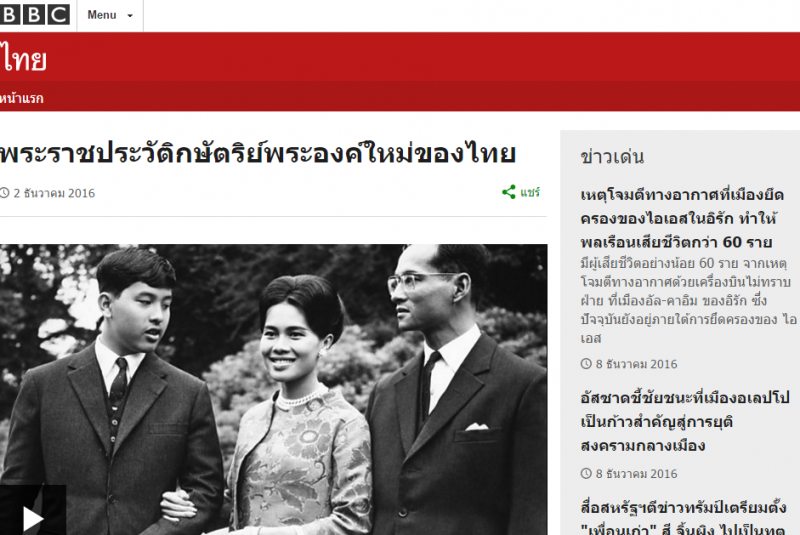 Screenshot of the BBC Thai article about Thailand's new king

The government of Thailand is currently investigating the Thai team of British Broadcasting Corporation (BBC) for publishing an ‘erroneous’ profile of the country’s new king.

Thailand enforces a strict lese majeste (royal insult) law which forbids the public from criticizing the monarchy. A simple notice to authorities about a lese majeste violation is sufficient to compel the police to launch an investigation. Those found guilty of disrespecting the monarchy can face a prison term of up to 15 years.

A day after King Rama X ascended to the throne, BBC Thai published a brief biography of the new king, which quickly went viral on social media. In just a few days, the post received 27,000 ‘likes’ and was ‘shared’ by 2,500 Facebook users.

One of those who shared the article on Facebook was activist Jatuphat Boonpattaraksa. He was arrested on December 3 for allegedly violating Section 112 of the Criminal Code, or the lese majeste law. He was subsequently released after posting a bail. 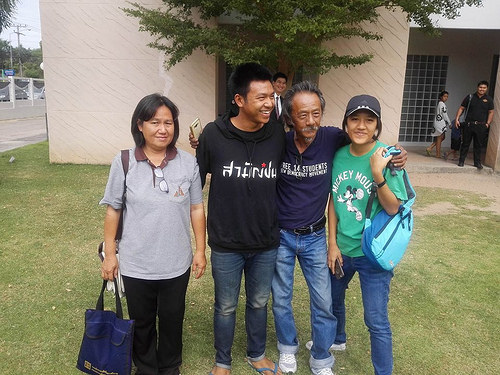 Jatuphat Boonpattaraksa (second from left) is reunited with his family after his release from detention. Photo from Prachatai

It is not clear why the BBC Thai article was deemed insulting to the new king. After the arrest of Jatuphat Boonpattaraksa, Thai netizens and even journalists have not commented about the content of the BBC article.

But if the profile published by BBC Thai is similar to the article published on the English website of BBC, perhaps Thai authorities were displeased to learn that BBC tackled the marriage, divorce, and other personal information of the new king. Some of the past controversies involving the new king were also briefly mentioned in the article. Even if these are public knowledge in Thailand, these are not discussed in mainstream media, in academia, or most especially within the bureaucracy.

Aside from arresting Jatuphat Boonpattaraksa, the Ministry of Digital Economy and Society has ordered local Internet Service Providers to block the article. The police also ‘visited’ the BBC Thai office but they found it closed for the day.

Grey sticker covered the locked glass door of the BBC office in Bangkok which no longer has any identification sign. #Thailand #LM#BBCThai pic.twitter.com/jyWqD8nAMJ

That an activist was singled out by the police for lese majeste-related arrest was seen by several groups as another indication of how the law has been used by the government to quell dissent.

The army grabbed power in 2014 and has outlawed protests as well as strictly regulated the media. It drafted a new constitution this year to pave the way for the restoration of civilian rule, but it also guaranteed the control of the military in all branches of the government.

The iLaw network, which has been pushing for the amendment of the lese majeste law, explained how the draconian law has undermined freedom of expression in Thailand: