How Netizens Are Pushing Back Against ISIS’ Social Media ‘Propaganda Machine’ 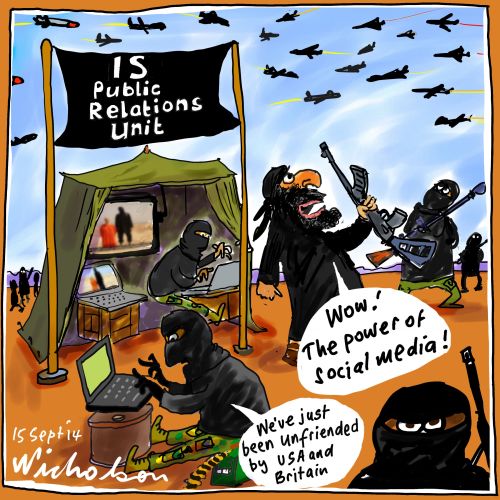 Cartoon by Nicholson from “The Australian” newspaper: www.nicholsoncartoons.com.au

Despite technological efforts to contain or eliminate their presence on social media, ISIS has amassed substantial power online.

It is difficult to quantify the precise impact of ISIS’ efforts to promote its mission and recruit new members. But some data suggest that it is having an impact. According to a 2015 study by King’s College London's International Centre for the Study of Radicalisation and Political Violence, “the number of foreigners that have joined Sunni militant organizations in the Syria/Iraq conflict continues to rise.” According to ICSR’s latest estimate, “the total now exceeds 20,000 – of which nearly a fifth were residents or nationals of Western European countries.”

Social media platforms have also been in the media spotlight as a key avenue for ISIS to spread its message and recruit new members. Writing for Reuters, security and intelligence expert Rita Katz describes ISIS’ use of social media as a unique within the realm of violent extremist organizations’ activity:

Until the rise of Islamic State, extremist activity and exchanges online usually took place inside restricted, password-protected jihadist forums. But Islamic State brought online jihadism out of the shadows and into the mainstream, using social media — especially Twitter – to issue rapid updates on its successes to a theoretically unlimited audience.

Facebook and Twitter have sought to prevent ISIS from marketing its graphic and hate speech content to the masses, but balancing these efforts with their commitments to free expression is no small feat. On Wired, Julia Greenberg writes:

…the challenge for sites like Facebook and Twitter goes beyond tracking down content that promotes terrorism. It also requires defining “promoting terrorism.” In a sense, the two platforms are global communities, each engaged in a constant process of determining community norms as the use of the platforms evolves.

But another part of the story, one that has garnered far less attention than the efforts of big companies and governments, are the many independent groups and individuals are making their own efforts to combat ISIS’ activities online.

Anonymous has published a series of guides to help those seeking to join its “war on ISIS” to track and identify the group's websites. It dedicates Twitter account @TeamDestroyISIS to retweet, mock and hunt down ISIS accounts accompanied by the hashtag #OpISIS.

@TeamDestroyISIS Photoshopped terribly by me. BUT IT GETS THE POINT ACROSS RIGHT!? :'D pic.twitter.com/RcIbtTam6M

Several individual Arab netizens have joined the international coalition against ISIS online. One of these contributions is the Twitter account @KSAssa or Saudi Arabia Electronic Army, with 20.7K followers, which is taking the lead to stop and “destroy” accounts related to ISIS and “every enemy” that threatens the country's unification under the Arabic hashtag #حمله_جيش_سبام_الدواعش (Campaign against ISIS spam accounts):

Your cooperation and activity is essential to delete the accounts of criminals and vandals, the enemies of religion and our homeland.

There is also @BlockDaesh, lead by @Mujtahid_i (30.4K followers), which aims to bring down ISIS Twitter spam accounts.

Although the account @faaars444 (25K followers) was originally created to ban pro-ISIS accounts that target Saudi national youths to join the group, the account has recently changed its mission. After the political rift between Saudi Arabia and Iran, following Saudi Arabia's execution of top Shia Cleric Nimr Al Nimr, the account converted to fight the “Safadis,” the most significant ruling dynasties of Persia in what known today as Iran, or in other words, Shia:

[…] I decided to change the activity from fighting against ISIS, especially these days, to fight the Safadis; and will get back to ISIS, God willing

And the question yet is beyond the air strikes and on-ground military operations:

But taking down ISIS websites is like shooting fish in a barrel, writes the Fight ISIS blog:

There is soo many targets out there right now on Twitter, Facebook, YouTube, and Sendvid all are flooded with ISIS users and Propaganda. You can help and you do not even need to be a Hacker to Shut Down ISIS Web Sites !!

The MIT Technology Review proposed a more human approach, arguing that what's missing is direct contact with the young generation (Muslims or non-Muslims) who are being targeted by ISIS to disprove jihadist propaganda:

Indeed, the technological response to stanching the recruitment isn’t having much of an effect. Internet companies close accounts and delete gory videos; they share information with law enforcement. Government agencies tweet out countermessages and fund general outreach efforts in Muslim communities. Various NGOs train religious and community leaders in how to rebut ISIS messaging, and they create websites with peaceful interpretations of the Quran. But what’s missing is a widespread effort to establish one-on-one contact online with the people who are absorbing content from ISIS and other extremist groups and becoming radicalized.