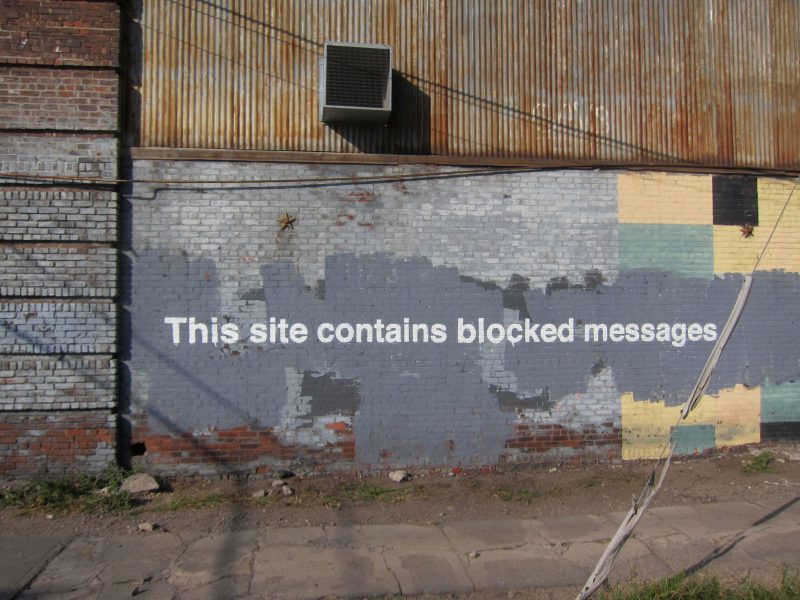 The Advox Netizen Report offers an international snapshot of challenges, victories, and emerging trends in technology and human rights around the world. This report covers news and events from October 5 – 11, 2019.

In Iraq and Ecuador, public protests have led to shutdowns of internet and social media services in recent days, all at the apparent behest of government officials.

After demonstrations against corruption, unemployment and poor public services cropped up across Iraq starting on October 2, multiple sources and technical experts reported widespread outages of major internet and social media services. On October 10, technical evidence gathered by NetBlocks and confirmed by local sources indicated that the internet is being shut down curfew-style, leaving residents unable to connect during nighttime hours.

Meanwhile in Ecuador, street demonstrations against austerity measures have escalated to open, violent confrontations between protesters and police, prompting authorities to impose a “state of exception.” Since October 3, journalists and activists have reported various incidents of internet censorship and disruption that appear to be associated with the protests.

Services including WhatsApp and Tweetdeck have experienced dramatic slow downs, and technical researchers have shown evidence that backend image and content (CDN) servers for Facebook and WhatsApp were temporarily disrupted on Ecuador’s state-owned telecommunication network, Corporación Nacional de Telecomunicaciones, on October 7. Activists at Usuarios Digitales, a local advocacy group, also tweeted reports that an activist attempting to livestream protests on Facebook had their account suspended.

President Lenin Moreno, who was once aligned with former leftist president Rafael Correa but has rolled back many of Correa’s social policies since taking office, has accused demonstrators of attempting to orchestrate a coup at Correa’s behest.

Turkish military attacks on Kurdish forces near the Turkey-Syria border have caused tens of thousands to flee the area, following US president Trump’s controversial decision to withdraw US troops from northern Syria, where they long have been allied with Kurdish forces.

The conflict has coincided with reports of social media and internet blocks in the region, that began circulating on Twitter on October 9. By October 11, technical tests by NetBlocks had confirmed that major social media services including Facebook, Instagram, WhatsApp and Twitter were being blocked on Turk Telecom, the country’s leading service provider.

Tech companies are cutting off Venezuelans, thanks to Trump’s executive order

On October 7, Venezuelan users of Adobe products received an email alerting them that they will be barred from accessing Adobe services after October 28. The email and an associated notice on Adobe’s Spanish site explained that the cutoff is the result of an executive order issued by the Trump administration in August 2019. Since then, the web-based money transfer service Transferwise has followed suit, also citing the order.

Executive Order 13884 dictates that “all property and interests in property of the Government of Venezuela that are in the United States…[ must be] blocked and may not be transferred, paid, exported, withdrawn, or otherwise dealt in.” Given the focus on property and interests of the Venezuelan government, it is not clear whether or how this applies to technology companies offering their services to the general public.

As has occurred in the past for tech companies attempting to follow economic sanctions against countries such as Iran, companies may be over-complying with the order, in an effort to avoid legal challenges.

A student at Bangladesh University of Engineering and Technology was beaten to death on October 7, after he wrote a widely shared Facebook post criticizing the recent signing of bilateral agreements between Bangladesh and India. Those responsible appear to be members of the student wing of the Awami League, Bangladesh’s ruling political party.

Abrar Fahad was reportedly called by university leaders to explain why he wrote a statement so critical of the government. On October 9, Bangladesh Telecommunication Regulatory Commission ordered the blocking of an online forum at the university, where more than 175 grievances and expressions of remorse had been posted anonymously by current and former students.

Ongoing mass protests in Hong Kong have had untold ripple effects on technology and free speech around the world in recent months. Here’s who got censored this week, because of what they said about Hong Kong:

South Park: Soon after the NBA debacle, the creators of the irreverent US cartoon South Park released a satirical apology video mocking the NBA for bringing “the Chinese censors into our homes and into our hearts” and criticizing China's “forced confession” practices by having one character confess (under duress) to the murder of Winnie the Pooh, who has become a part of a popular online meme mocking Chinese President Xi Jinping. The video was promptly censored in China.

Hearthstone gamer Chung “Blitzchung” Ng Wai: A pro-level player of the popular video game Hearthstone was suspended and stripped of a winning tournament title after he declared his support for Hong Kong protesters in an interview. Blizzard, the maker of Hearthstone, told press that “engaging in any act that, in Blizzard’s sole discretion, brings you into public disrepute, offends a portion or group of the public, or otherwise damages Blizzard image will result in removal from Grandmasters and reduction of the player’s prize total to $0 USD.” Blizzard is partially owned by Tencent, one of China’s largest and most powerful technology companies.

HKmap.live: A mobile app expressly created to help Hong Kong protesters crowdsource information about street activity, including police presence, was removed from Apple's app store on October 9. The app was originally introduced in September and taken down at the time, but was re-instated after public disapproval. This time around, Apple’s Tim Cook defended the app's removal, saying it was intended to protect police from being targeted by protesters. Human Rights Watch China researcher Maya Wang called it “another shameful incident in which a multinational company bends to Chinese government pressure.” The app is still available in the Google Play store.

The Revolution of Our Times: The Google Play store removed a role-playing mobile game with a plot line based on the Hong Kong protests, citing a violation of its policy against apps that lack reasonable sensitivity towards “sensitive events.” The mobile game, entitled “The Revolution of Our Times,” was launched on October 5 and taken down three days later. The game provides details on the political context leading up to the protests with a map on key protest sites in Hong Kong.