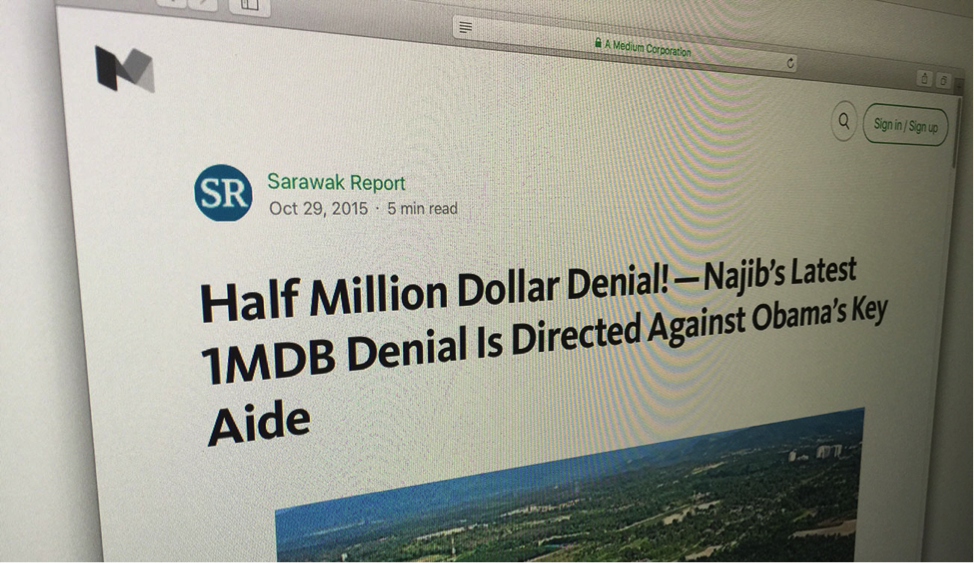 The Malaysian government is now blocking the blogging platform Medium, in an apparent effort to censor the Sarawak Report, which had been mirroring its articles on Medium since it was blocked in July 2015 for reporting allegations that $700 million linked to a state investment fund ended up in the prime minister’s personal bank account.

Initially, Malaysia’s Communications and Multimedia Commission ordered Medium to remove an article posted by the Sarawak Report on the grounds that the text contained “false, unsubstantiated, and misleading” information that violates the country’s Communications and Multimedia Act. Medium’s lawyers then asked for detailed evidence showing specifically what statements are untrue and whether there are any official judicial findings related to the story. Malaysian officials responded by blocking the entire website. Following these developments, Medium said in astatement, “We stand by investigative journalists who publish on Medium. Until we receive an order from a court of competent jurisdiction, the post stays up.”

Indonesia cracks down on LGBTQ stickers

The Indonesian government forced the messaging app Line to remove LGBTQ-themed stickers from its Indonesian-language store, and is asserting similar pressure on WhatsApp, according to an article published in Quartz. The move signals the Indonesian government’s escalating hostility toward gay rights. Some officials have said “social media must respect the culture and local wisdom of the country where they have large numbers of users.” Despite this, they are likely to face an uphill battle in seeking to remove all LGBTQ-themed items from social messaging: Apple introduced same-sex emojis last year, and WhatsApp’s emojis are built in as part of its keyboard.

In the past six months, Cambodian authorities have ramped up arrests of Internet users on charges of defamation and inciting violence, according to a recent report from the Cambodian Center for Human Rights. Twenty-four Internet users have also been publicly threatened for comments made on social media platforms, according to the report. The new trend could lead to a culture of self-censorship that threatens to inhibit “the expression and tolerance of diverse views … essential for maintaining a healthy democracy,” analysts say.

Surveillance negotiations between the U.S. and U.K.

The governments of the United States and the United Kingdom are busy negotiating a final agreement that would allow British intelligence officials to serve wiretap orders directly on U.S. communication firms, like Facebook and Google, allowing officials in the U.K. to eavesdrop on communications between British citizens in criminal and national security investigations.

Under the terms of the initial draft agreement, which has not been made public, British intelligence agencies would not be permitted to obtain directly the records of American citizens or residents, and they would still have to follow the U.K.’s own (weaker) rules to obtain warrants for the data. The changes could have a significant impact on user privacy and would be reciprocal, so the U.S. could ask for wiretaps or stored data from U.K. companies, if the target were American and not a British citizen.

Gmail introduced a new authentication feature that identifies when emails are sent across connections that are not fully secure. When users send or receive an email from a recipient whose account is not encrypted, they will see a red open lock to indicate the contents were sent over an unsecure connection.

Responding to EU privacy regulators, Google plans to of the Right to be Forgotten by removing search results across all its websites when accessed from within a European country. Previously, it only removed delisted search results from European domains, like Google.fr and Google.de.

A French court of appeals ruled that French citizen Frederic Durand-Baissas has the right to sue Facebook in French court for removing his post of the Gustave Courbet painting “The Origin of the World.” The landmark ruling rejected Facebook’s claim in its user policy that worldwide lawsuits be heard only in Santa Clara courts, near Facebook’s global headquarters in California. The French court called the requirement unfair and excessive.
New Research