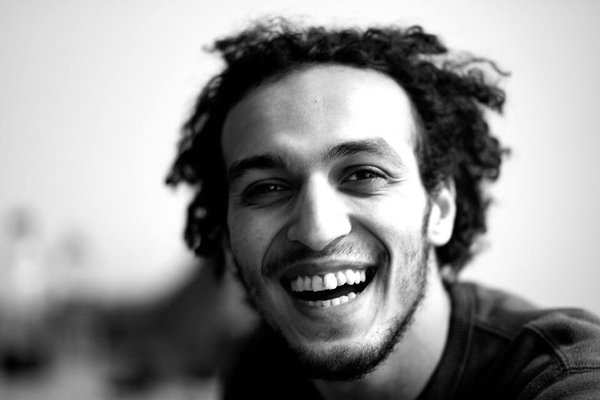 Mahmoud Abou Zaid, aka Shawkan, has been imprisoned for more than 900 days whilst covering the clearance of Cairo's Raba'a el Adaweya camp in support to ousted president Mohamed Morsi. Photo shared on Twitter by @Ciluna27.

Shawkan was arrested on 14 August 2013, along with dozens of foreign journalists covering the forced dispersal of a sit-in at Cairo's Rab'aa el Adaweya camp. In the incident, nearly 800 people were arrested at an event in support of overthrown Muslim Brotherhood-affiliated president Mohamed Morsi. Shawkan was among other journalists, photographers and Muslim Brotherhood supporters present who were arrested and held on falsified charges, according to Amnesty International.

The incident was one of the most violent events that took place in Egypt after Morsi's ousting. The clearance footage shows mass murder, firing of tents and properties, and random capture of people at the sit-in and in the surrounding areas.

Shawkan faces charges of premeditated murder, inciting violence, illegal arms possession, and being a member of the Muslim Brotherhood, which Egyptian authorities now classify as a terrorist organization. Shawkan's detention has been renewed every 45 days without ratified official charges. These periodic renewals stand in violation of Egyptian criminal law, which prohibits indefinite detention without a criminal conviction and sentence.

On 23 April, it is expected that he will face trial along with 793 other defendants, the majority of whom are Muslim Brotherhood supporters. A letter of support from the Committee to Protect Journalists noted that this may put him at a disadvantage:

Shawkan is being tried alongside more than 700 other defendants, which can only harm the chances of the court recognizing that he was arrested in the course of his work as a journalist.

Shawkan's pictures were used by recognized news media including TIME magazine, Die Zeit, Amnesty International, and Global Voices. At the time of his capture, he was working for the London-based photography agency Demotix, which has voiced support for Shawkan. In a public statement, Demotix wrote that Shawkan's work was “completely impartial with a simple objective – to tell the news from the perspective of a local photographer who had lived in Egypt all his life.”

In a letter published in March 2015, Shawkan described the torture he underwent at the police station as an officer beat him using belt buckles and closed fists. He described being kicked by officers with their boots on. He described Tora prison, where he is currently detained, as a “dungeon” that he shares with other prisoners. Shawkan ended the letter saying:

Is humanity is just an illusion? What if we have forgotten the difference between dreams and reality? How do I ensure that I am not in a coma? When reality comes between me and my dreams, should I stop dreaming? I look around and I am left with the reality of four ugly windowless walls and a never ending dream of freedom.

According to the Committee to Protect Journalists (CPJ) 2015 prison census, Egypt ranked second after China as the world's biggest prison for journalists. Reporters Without Borders’ (RSF) World Press Freedom Index lists Egypt as the 158th out of 180 other countries.

RSF called for the immediate release of Shawkan last March, affirming that his detention is no more legal as the time he has spent in prison has already exceeded the period allowed according to the Egyptian code of criminal procedure. Aged 29, Shawkan is currently suffering from severe medical conditions that are worsening as he has not received proper treatment, RSF reported.

Meanwhile, social media activists and politicians have been advocating Shawkan's case, calling for his freedom through #FreeShawkan and another hashtag named: “Journalism is not a crime” .

no one should have their FREEDOM snatched because they are painting a picture of the world we live in#FreeShawkan pic.twitter.com/BMQsWsEDZG

His crime was being there with his camera, covering the dispersal of the Raba'a el Adaweya sit-in

Certainly hope he seizes the occasion to speak about imprisonment of journalists and others. #FreeShawkan https://t.co/ZgrAtp3TZA

Press behind bars, a profile that defends journalists in Egypt and advocates press freedom, said that mother of tortured and killed Italian student, Julio Regeni, asked president Abdelfattah El-Sisi to free Shawkan. The account says in a tweet:

The messages of Shawkan's case has spread around the world. American citizen Joanna Hamil shared a petition to free Shawkan. She tweets:

Marwa tweeted a few days ago in #FreeShawkan, she said:

Shawkan is sick and his condition is deteriorating. He's a photojournalist who was arrested whilst performing his work #FreeShawkan”

Global Voices will continue to cover Shawkan's case as it unfolds. To support him or learn more about his work, follow the #FreeShawkan hashtag on Twitter.