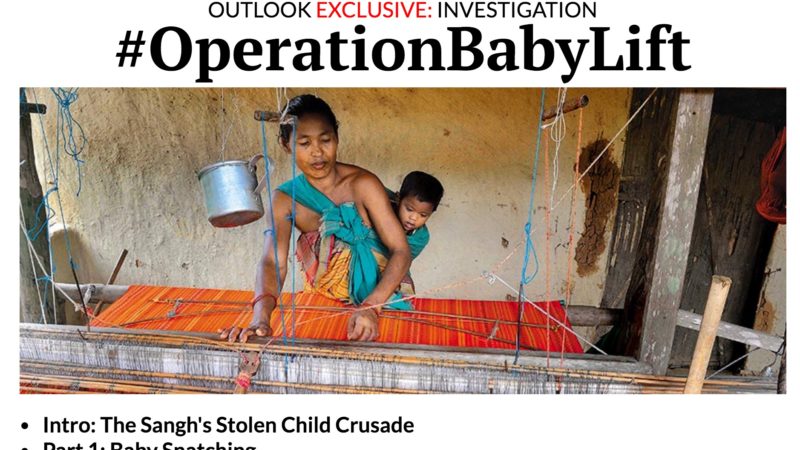 Journalistic exposé Operation #BabyLift, a groundbreaking investigative piece about child trafficking by the Hindu organisation Rashtriya Swayemsevak Sangh (RSS) in India, was published by Outlook magazine on July 29, 2016. The 11,000-word article, which went viral, explores how Operation #BabyLift broke Indian and international laws by trafficking 31 girls — between three and 11 years of age — from Assam to Punjab and Gujarat in order to ‘Hinduise’ them.

What happened next was quite extraordinary. The journalists who broke the story have since become the target of an investigation, with an onslaught of vilification, defamation and threats being hurled against them.

A criminal complaint for inciting hate against different ethnic groups has been lodged against an independent Indian journalist, Neha Dixit, as well as Indranil Roy and Krishna Prasad, the publisher and editor of Outlook magazine. The complainants are Subhash Chandra Kayal, an assistant solicitor general of the government of India at the Gauhati High Court, and Bijon Mahajan, a spokesman for the ruling Hindu nationalist Bharatiya Janata Party (BJP), which is a political offshoot of the right-wing RSS.

Now, instead of a follow-up on the trafficking issue, Dixit and Outlook magazine are being trolled and their patriotism and journalistic ethics are being called into question. Neha Dixit has been intimidated online and there is a fake Facebook account in her name.

Pictures of Dixit's husband are also being shared; he is being labelled as a Naxalite, a member of a violent guerrilla group in India.

Ok So Naxalite Sawhney is Spouse of @nehadixit123!
So Piece of SHIT Is indeed Motivated 2 Overcome Family Expenses pic.twitter.com/AjvvynSdam

The complaint against Dixit and Outlook was lodged under Section 153-A of the Indian Penal Code, whereby it is an offence to promote disharmony and enmity between different ethnic groups. This section has been used against renowned literary figures, artists and freethinkers such as Salman Rushdie for his book The Satanic Verses, which is banned in India; M.F. Hussain, a Muslim painter who liberally drew on Indian mythology and in 2006 was booked for her painting of a nude Hindu goddess; and Indologist Wendy Donegar for her critical historical work The Hindus: An Alternative History. In Donegar's case, Penguin had an out-of-court settlement, and the book, though not banned, was voluntarily recalled from India by the publisher.

The Delhi Union of Journalists and the New York-based Committee to Protect Journalists have both condemned this “witch hunt” against the reporters. A group of like-minded journalists, activists and academics have also issued a statement to condemn the attacks on Dixit and Outlook magazine:

Journalists are particularly vulnerable, as their investigative reports that reveal RSS organizations’ strategies to attack minorities, Hinduise tribals and created hatred between communities, are themselves targeted as ‘inciting communal hatred’.

The RSS issued a press release denying these accusations. It called the Outlook article “baseless” and said it was “defaming the organisation”. A rebuttal to Dixit's piece, also published in Outlook and entitled ‘Conjured Crime’, was written by Monika Arora, a supreme court advocate and a member of RSS:

None of these Indian and international guidelines are violated by RSS outfits. The parents have given their consent to the RSS outfits to take their children for education – then how on earth are the Juvenile Justice Act 2000 or other laws are applicable in this case?

A few days after publishing the rebuttal, the news magazine fired its editor, Krishna Prasad, sharing the news with employees through an email. Earlier, Prasad reacted to the First Information Report (FIR) lodged against him and told media watch website The Hoot:

Threats against journalists may be an occupational hazard but what we are seeing today is a more serious attempt to shoot the messenger. The country is fast hurtling down a fascist mode and this fiction of public narrative of demonizing journalists is dangerous for free speech.

https://t.co/xN03P0oJke
Intolerance of BJP/RSS combine. Are we on the path of Fascism as predicted by Krishna Prasad ?

The media in India is happy crawling for bullies, turning blind eye on Una protests & then staying silent on Outlook editor! #UnitedWithUna

Veteran journalist Pamela Philipose — senior fellow with the Indian Council of Social Science Research, recently appointed public editor for news site The Wire and former director and editor-in-chief at the Women’s Feature Service — shared her perspective about the removal of Outlook's editor and the pressure on Indian media houses and journalists:

This climate of impunity and fear will lead to greater self-censorship on the part of individual journalists and enormous pressure being brought to bear on managements to clamp down on independent reportage. For instance, while it was claimed that the change of the editor-in-chief at Outlook was a decision that had already been taken, the timing of the announcement clearly indicates an anxiety on the part of the management to appease the powers-that-be.

Human rights organisation Amnesty International is also facing sedition charges in India over holding an event about Kashmir — territory in the north of the country where dozens have been killed by Indian security forces recently while protesting the death of a separatist leader. The group's India office, which is at present closed because of security concerns, was attacked by Akhil Bharatiya Vidyarthi Parishad (ABVP) workers armed with petrol can bottles. ABVP is a nationalist student organisation affiliated with the RSS.

Kuldip Kumar, an Indian journalist, suggested that the country has “reached a stage where a Hindu’s nationalism is never in doubt even if he debunks the Constitution, glorifies Gandhi’s assassin and mourns India’s independence; but the nationalism of Muslims and Christians is always suspect”. In a recent article, he deconstructed the influence that the RSS is enjoying under the current BJP administration:

The RSS is enjoying political power and the BJP, its subsidiary, enjoys a majority of its own in the Lok Sabha [lower house of Indian parliament] – it is in power in as many as eight states. This power has rekindled the RSS’s dreams and aspirations, although even now it knows that refashioning India into a Hindu nation is not such an easy task.

The case of Indian secularism and free speech is not clear. According to its constitution, the country is a secular republic with freedom of expression, but the same constitution also prohibits anything that hurts religious or ethnic sensitivities. There are many journalists, artists and authors who are suffering for asking critical questions about free speech. Is the space for liberal free thinkers in India shrinking?