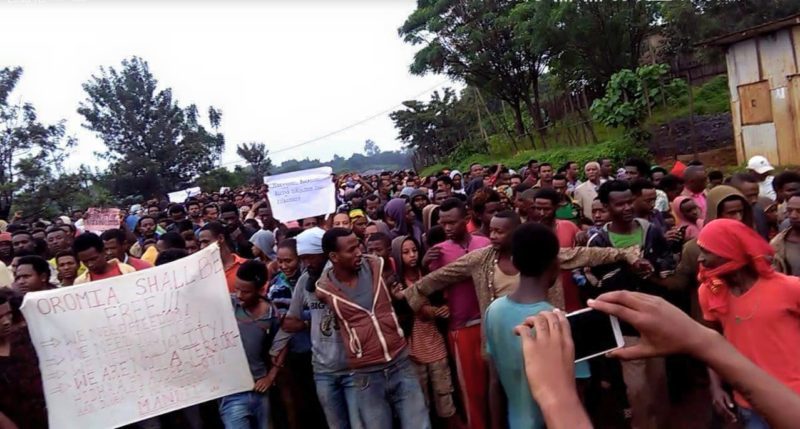 Bangladeshi Internet users have experienced several waves on service shutdowns and website blockages in what the Communication Regulatory Commission described as a government-enforced “drill.” Since early August, authorities have blocked 35 news websites, many of which represent critical positions within the country’s political climate.

Citizens are struggling to see how these shutdowns are likely to have a positive impact on public safety, says Global Voices’ Zara Rahman, in a country where freedom of expression is increasingly under threat.

The Internet was also reportedly shut down yet again in Ethiopia as violence marred protests in the Oromia and Amhara regions. About 100 people were killed when security forces fired live bullets at demonstrators over the weekend of August 6. Tests by the Open Observatory of Network Interference (OONI) confirmed the Internet was likely blocked during that time, though it remains unclear whether this occurred in all regions or across all types of networks in the country.

In Oromia, the Internet has become an important tool for protesters to disseminate information about their movement, which opposes a plan to expand the capital Addis Ababa into the region’s farmlands, a move that would likely displace thousands of local farmers. Coverage from the country’s mostly state-owned media has pushed misinformation or ignored the situation altogether. In an effort to control the dissent, state-owned telecommunication monopoly EthioTelcom has blocked social media platforms including Twitter, WhatsApp and Facebook Messenger in Oromia in the past.

Colombian graduate student Diego Gomez, who is battling criminal charges that he violated copyright by sharing a thesis on the Internet, is likely to receive a verdict in the coming days.  In an effort to support Gomez’s case, Colombian digital rights NGO Fundacion Karisma launched the Twitter hashtag #CompartirNoEsDelito, which translates to “sharing is not a crime.” The copying and distribution of copyrighted works without permission in Colombia can carry a sentence of up to eight years in prison.

Peru buys millions of dollars worth of surveillance equipment

Peru purchased USD $22 million in technical surveillance equipment to spy on its citizens’ communications, according to the Associated Press. Government documents indicate that the “Pisco Project” (a name that refers to the popular Peruvian liquor) allows the government to intercept phone calls, text messages, emails, chats and Internet browser history. It can track up to 5,000 people and record up to 300 simultaneous conversations.

The National Intelligence Service of Peru also authorized a payment for Skylock, a tool that allows law enforcement officials to find and track any phone inside the country. Payments for these technical tools were made to the American-Israeli company Verint, which is also present in Brazil, Colombia, Ecuador and Mexico.

The wife of prominent labor activist Najibeh Salehzadeh is awaiting a verdict in the Iranian state's case against her, in which she is accused of “insulting” Iran's Supreme Leader and compromising national security through a post on Facebook in early June. Salehzadeh has denied the charges and says she does not even have an account on the social media site, which is banned in Iran. Human rights activists believe the case was fabricated in an effort to intimidate her husband, Mahmoud Salehi, a prominent labor activist who has been arrested and imprisoned on a number of occasions in Iran for engaging in peaceful protest activities.

According to an announcement by Gerdab, the cyber division of Iran’s Revolutionary Guards, it has summoned, detained, or warned over 450 administrators of social media groups in recent weeks. This is part of an ongoing crackdown that started in March 2015 that the Gerdab called “Ankaboot” (“Spider” in Persian) to implement broad-scale social media monitoring to curb immoral activity.

Indian journalists who dug up evidence that the right-wing Hindu organisation Rashtriya Swayemsevak Sangh (RSS) allegedly trafficked children have themselves become the target of a police investigation and online abuse. The investigative piece published by Outlook news site, titled Operation #BabyLift, reports that RSS broke Indian and international laws by trafficking 31 tribal girls between the ages of 3 and 11 in order to “Hinduise” them.

An assistant solicitor general and a spokesman for the ruling Hindu nationalist Bharatiya Janata Party, which is a political offshoot of the RSS, had earlier lodged a criminal complaint against Outlook editor Krishna Prasad, as well as journalist Neha Dixit and Outlook publisher Indranil Roy, for inciting hate against different ethnic groups. Prasad has since been fired. Journalists and free speech advocates fear this case and others like it will lead to increased self-censorship in India.

Pakistan’s National Assembly passed a new controversial cybercrime bill, which will soon be signed into law by President Mamnoon Hussain. The Prevention of Electronic Crimes Bill 2015 has been criticized for restricting freedom of expression and access to information, and is likely to be misused by authorities, according to National Assembly member Naveed Qamar.

A draft law under consideration in Paraguay, titled “On protection of kids and teenaagers from dangerous internet content,” seeks to install filters that would block content considered “dangerous” to young people on publicly accessible internet networks. This could result in increased censorship and make it difficult for adults to access age-appropriate material, and has been widely criticised for its potential impact on freedom of expression in Paraguay. The bill has passed Paraguay’s congress and now awaits a signature by the president, though under Paraguayan law he still has the opportunity to veto the bill.