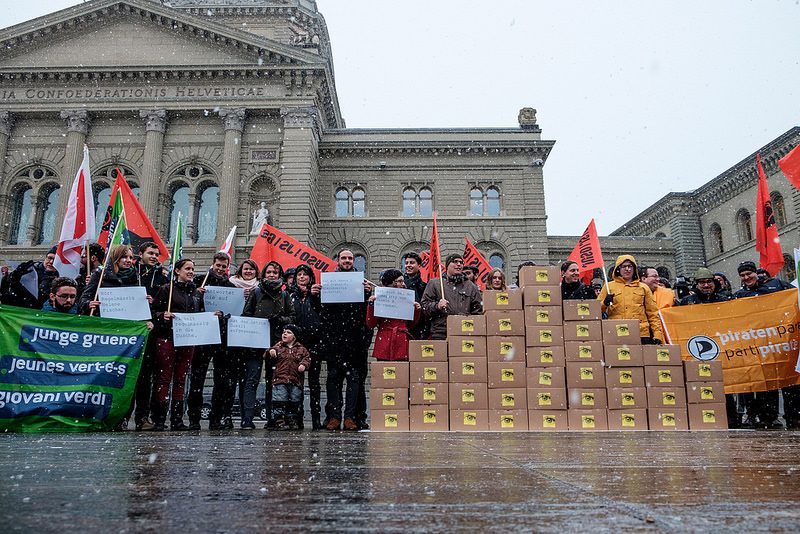 Swiss activists gather to deliver votes for referendum on surveillance law. Photo by JUSO Schweiz via Flickr (CC BY 2.0)

The law expands the surveillance capacities of the Swiss government, but still requires intelligence officials to obtain approval from a federal court, the defense ministry and a cabinet in order to being monitoring a citizen. This procedure is intended to distribute checks on power and thereby make the law less susceptible to abuse, at least in theory. In urgent cases, however, these approvals can be obtained retroactively. Citizens who are targets will also be informed within a month of the methods and duration of the surveillance, though there are exceptions if notifying the suspect is against the public interest, would affect legal proceedings, or could put people in danger.

The law won citizens’ approval by 65.5%, with 43% of eligible voters participating. The bill was initially approved by parliament in 2015, but critics of the bill collected signatures to force the referendum.

Social Democrat parliamentarian Jean Christophe Schwaab, a leading opponent of the bill, expressed concern that the current government would circumvent judicial and defense approval processes. He also said that he is concerned that it could give way to a slippery slope effect for surveillance practices in the coming years, noting that it is very difficult to reject an urgent request from the intelligence service “in the current climate of general paranoia.”

The law is also raising concern among Swiss-based technology companies including ProtonMail, a popular encrypted email service provider known for its relative user-friendliness. ProtonMail founder Andy Yen expressed disappointment about the referendum results in an interview with TechCrunch, but he asserted that the law would have “no impact on ProtonMail,” due to the fact that the company does not collect or store users’ email encryption keys (which are imperative to decrypting and reading the content of an email message) or personally identifiable information.

Mexico is spending a lot of money on surveillance tools

Mexican news outlet Reforma recently confirmed that Mexico's attorney general acquired surveillance software from the Israeli company NSO Group in 2014 and 2015 for a sum of 15 million dollars. This only adds to a growing list of major purchases that Mexican government agencies have made from leading surveillance software companies over the last four years. Leaked documents and technical investigations also have revealed that authorities have used Gamma’s Finfisher software, Hacking Team’s Remote Control System, and so-called IMSI catchers made by Finnish technology company Exfo Oy.

Jordanian writer Nahed Hattar was shot dead on September 25 outside a courtroom in Amman, where he was scheduled to stand trial over a cartoon deemed offensive to Islam that he posted on Facebook. Hattar was charged with “inciting sectarian strife and insulting Islam,” according to the Guardian. The cartoon depicted a bearded man, presumably an ISIS militant, lying in bed next to two women, asking God to bring him a drink. Though the gunman was arrested, Hattar’s family has called on the government to hold those accountable who incited violence against Hattar on social media. In the meantime, Jordanian authorities have issued a ban on media coverage of Hattar’s case and assassination.

Sudanese prosecutors use ‘pornographic’ photos to support case against activists

Six Sudanese activists affiliated with the Khartoum Center for Training and Human Development are currently on trial for undermining the constitutional system, waging war against the state, espionage, and terrorism. If convicted, they could be sentenced to life in prison, or death. As evidence of their supposed “immorality”, Sudanese prosecutors have resorted to showing private photos and videos culled from the defendants’ confiscated laptops. Among others, the photo tweeted below was presented as evidence of the activists having “pornography” on their computers.

pornographic photo used as evidence against @midhatafifi on 4/9 trial featuring me & my husband #Sudan @TRACKsudan pic.twitter.com/7C2Pp92g5Y

The UAE has dropped charges against Scott Richards, a British-Australian national living and working in Dubai, for sharing on Facebook a link to a charity raising funds for refugees in Afghanistan. Under UAE law, it is illegal to promote charities that are not registered with state authorities. Raising money for charities without obtaining the written approval of the authorities is also prohibited. Violators can face up to one year in jail and a fine.

Women in a cross-section of developing countries are 50% less likely to use the Internet than men, according to the World Wide Web Foundation. The Foundation produced report cards assessing the progress on closing the gender gap in 10 countries, including Colombia, Egypt, Ghana, India, Indonesia, Mozambique, Nigeria, the Philippines, and Uganda. The report finds that while India and the Philippines have almost closed the gap in urban areas, there is a long way to go — and even obtaining gender-disaggregated data on Internet access is still difficult, making it hard to measure progress where it occurs. According to the report, factors that prevent women from going online include affordability, knowing how to use the Internet, and online violence.