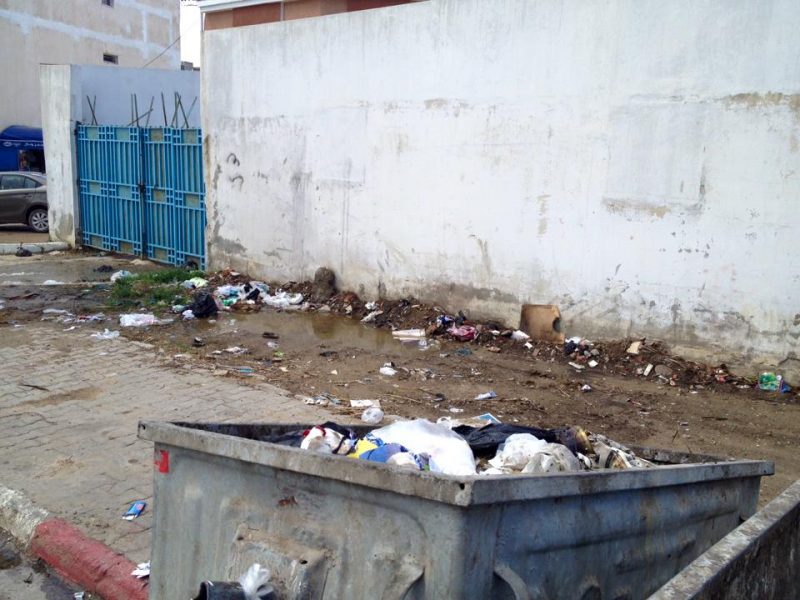 Garbage accumulates outside of a secondary school in Bizerte, Tunisia. Photo by Hamza Batti via Facebook.

A Tunisian high school student could be suspended for three days for denouncing on Facebook the filthy state of his school in Bizerte, northern Tunisia. On 30 September, Hamza Batti posted four photos showing unfinished construction work at his school's basketball field and piles of trash accumulating outside the school entrance.

Along with the photos, he posted the following comment:

This is what is called a “pioneer” school in Bizerte, which is supposed to be a school where the conditions for studying are convenient, and the most basic elements for succeeding with excellence are available.
[…]
…that pile of garbage is there everyday outside the secondary door which gives our “pioneer” school a more than wonderful image…The garbage is available in other forms inside, like the dust which is everywhere, the restrooms (I won't even describe them), broken windows and doors, and the walls that only get painted once every four years or on special occasions
[…]
Anyway, all this and more you find it everyday at the pioneer school, the face of Bizerte, Tunisia and North Africa

Batti told the privately-owned radio station MosaiqueFM that he was interrogated by his school administration on 5 October, which accused him of engaging in a “smear and distortion campaign” against it. Speaking to the radio station, he clarified his intention:

I was only expressing myself freely, and I have the right to post pictures with the aim of improving the situation. That was my intention.