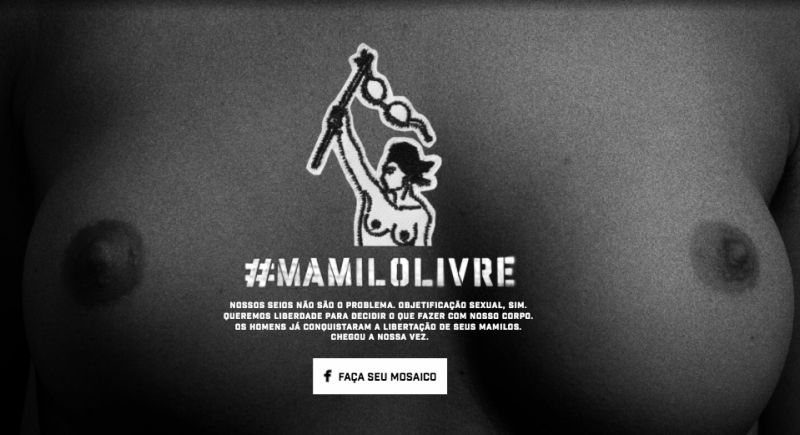 In September 2015, psychologist and blogger Letícia Bahia and photographer Julia Rodrigues launched the campaign Mamilo Livre (Free Nipple), featuring print portraits of both men and women with bare chests, aiming to challenge objectification of women's breasts and advocate individual sovereignty over one's body. As the campaign encouraged people to print photos from the campaign's website and post them in public spaces, the posters were seen in many Brazilian cities.

But as people started to publish the campaign photos on social media, they encountered a barrier not seen in the offline world: Facebook blocked all the portraits featuring women and suspended the profiles of those who published them. This included both campaign founders, as well as the page AzMina — a feminist digital magazine with over 80k followers, which helped support the campaign from its conception.

Julia and Letícia recently devised a way to outsmart Facebook's censorship: if you divide the photo of the nipple into four different photos and publish them simultaneously, Facebook will display it at people's feeds as a mosaic, where the nipple will be completely visible — but still not entirely present in one single photo, and thus not detected by its system.

The campaign's website made available an app where users can upload a photo of their nipple which will then be divided into four different photos.

The photos of the campaign are actually part of an older project conceived by Julia Rodrigues. On a Facebook page named “Pode Não Pode” (You can, you can't), she uploads photos of men and women with their bare chests and lets the network delete the ones it deem inappropriate. Facebook's technologies typically delete the ones featuring women. The result is an album where men's photos showing their nipples are untouched, where women's are either covered with a black tag or cropped above the nipples.

As she explains on the project's page:

Those photos are part of an experiment of mine inside Facebook. People from all genders posed for me with their bared chests, without sexual or pornographic appeal. Which photos will be considered improper for the public or for the Facebook system? What are the real differences between one portrait and another? What is offensive in one nipple that isn't in the other?

Social media platforms such as Facebook and Instagram (owned by Facebook) prohibit any and all “graphic content” that pictures a woman's areola, but not men's. This has been challenged by activists around the world for the past few years. In 2014, Lina Esco's documentary ‘Free the Nipple’ investigated the United States obscenity laws in the United States, where it is illegal in 13 states for a woman to be topless in public.

Obscenity laws in Brazil are similar — women exposing their nipples in public could fall into the Article 233 of the country's penal code, which deals with practicing obscene acts in public. Although cases, where women were detained for this, are increasingly rare, Brazilian society hardly tolerates a female nipple to be seen in public. This comes as a shock to many foreigners who come to visit the famous Brazilian beaches. But indeed, contrary to European beaches, where the practice is somewhat common, in Brazil being topless (if you're a woman) isn't accepted at all.

When the Danish gymnastics team visited Rio de Janeiro to give a workshop in 2013, they sunbathed topless in Copacabana and were snapped by a photographer of Brazil's media outlets. The case gained so much media attention in Brazil at that time that the team's trainer approach the press to explain they were unaware of local custom.

Gradually this has been challenged in Brazil, with many feminist movements doing marches attended by many women who, in protest against hypersexualization and shaming of women's bodies, bare their chests in public. This has been accompanied by increased frustration with Facebook and Instagram's Community Standards, which allow specific non-sexual images of women's nipples (they make exceptions for breast feeding and post-mastectomy photos), but not others. They also allow some images of graphic violence, such as photos of people who have been tortured. Hypersexualized images of female breasts are also considered appropriate (as long as the nipple is not clearly visible), while photos including women's nipples ranging from indigenous ceremonies in Australia to campaigns against breast cancer are prohibited.

In Letícia and Julia's campaign's manifesto, they demand equal rights for men and women and a stop to the shaming of the female nipples:

Women and men are equal in rights and obligations. Freedoms that are available to one group must be available to all. 2. Hiding or displaying the nipples should be a choice, not an obligation. For anyone, of any gender, race or religion and at any age. 3. No one has to be ashamed of their nipples (or anyone else's nipples). It's a part of the body like any other, and everyone is born with nipples. 4. Nipples are different from each other. Each one has unique colors, sizes and shapes. They're as diverse as people, and diversity is beautiful. 5. Nipples are not public. The fact that they are being shown does not mean they're at disposal. 6. Nipples are not inherently sexual. They might be, but they don't need not be, like any other part of the anatomy. 7. Individuals are sovereign over their bodies. Other people's shame and lust can't prevail over the free enjoyment of one's body.