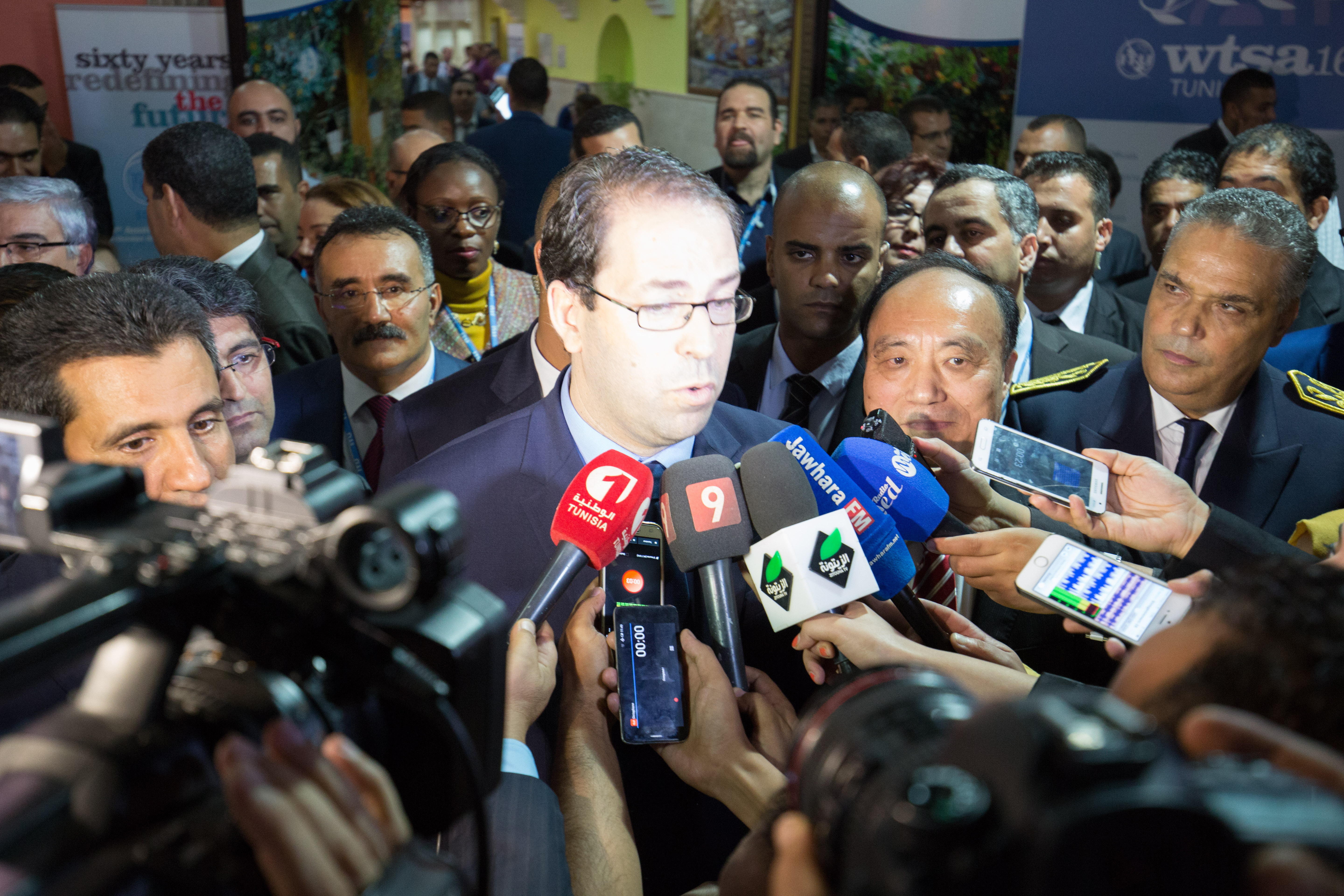 Tunisian Prime Minister Youssef Chahed speaking to the media during the 2016 World Telecommunication Standardization Assembly which took place in Tunisia. Photo by the ITU, shared on Flickr under a Creative Commons License (CC BY 2.0).

In a win for Tunisian media workers, the Tunisian government suspended state-issued guidelines dictating how government employees should communicate with the media.

The guidelines in question, issued by Prime Minister Youssef Chahed in circular number 4 of 15 January 2017, required civil servants not to speak to the press and not to reveal official information unless they were authorized by their superiors:

Out of respect for the duties of civil servants in their relationships with media outlets, as outlined in the code of conduct and ethics of the public servant, they [civil servants] are refrained from making statements or interventions, or disclosing official information or documents in the press or by any other means, related to their functions or to the public structures they work for without the preliminary and explicit authorization of their hierarchy

Despite being in line with existing legislation regulating information and communication units in ministries and government institutions, the guidelines were denounced by rights groups and organizations promoting press and media freedoms. In addition to calling on the government to immediately withdraw these guidelines, local journalists and media syndicates used the issue as an opportunity to lobby the government to review Decree 4030 of 4 October 2014 on the code of conduct and ethics of public servants.

The decree bans public servants from making statements to the media and disclosing public information without the authorization of their hierarchical superiors or the directors of the public institutions they work at. The guidelines were issued in line with the aforementioned decree.

The National Syndicate for Tunisian Journalists along with other unions representing media professionals threatened protest actions including a demonstration that was scheduled on 28 February and a strike in the media sector, if the controversial guidelines are not suspended and Decree 4030 is not reviewed.

However, in a meeting between government representatives and unions representing journalists and media professionals that took place on 27 February, the government decided to suspend the guidelines, and to amend Decree 4030 by 3 March.

Since the 2011 ousting of Zine el-Abidine Ben Ali, who held power for 23 years, Tunisia has taken steps in favor of freedom of information, in an attempt to improve government transparency and reduce corruption. In 2016, the constitutional right to access information was reinforced by the parliament's adoption of a freedom of information law (Law 22 of 24 March 2016 on access to information). Last week, the parliament adopted a law protecting whistle-blowers who reveal evidence of corruption. However, these reforms are often slow to translate into actions.

It seems that journalists and rights groups in Tunisia are meant to keep fighting for democratic reforms. As Journalists’ Syndicate president Neji Bghouri put it: “The professional organizations will continue their work to thwart any measures that could restrict press freedom.”