‘Those who tortured him [should] tell us the truth': Tunisian Commission Hears Net Freedom Testimonies From Dictatorship 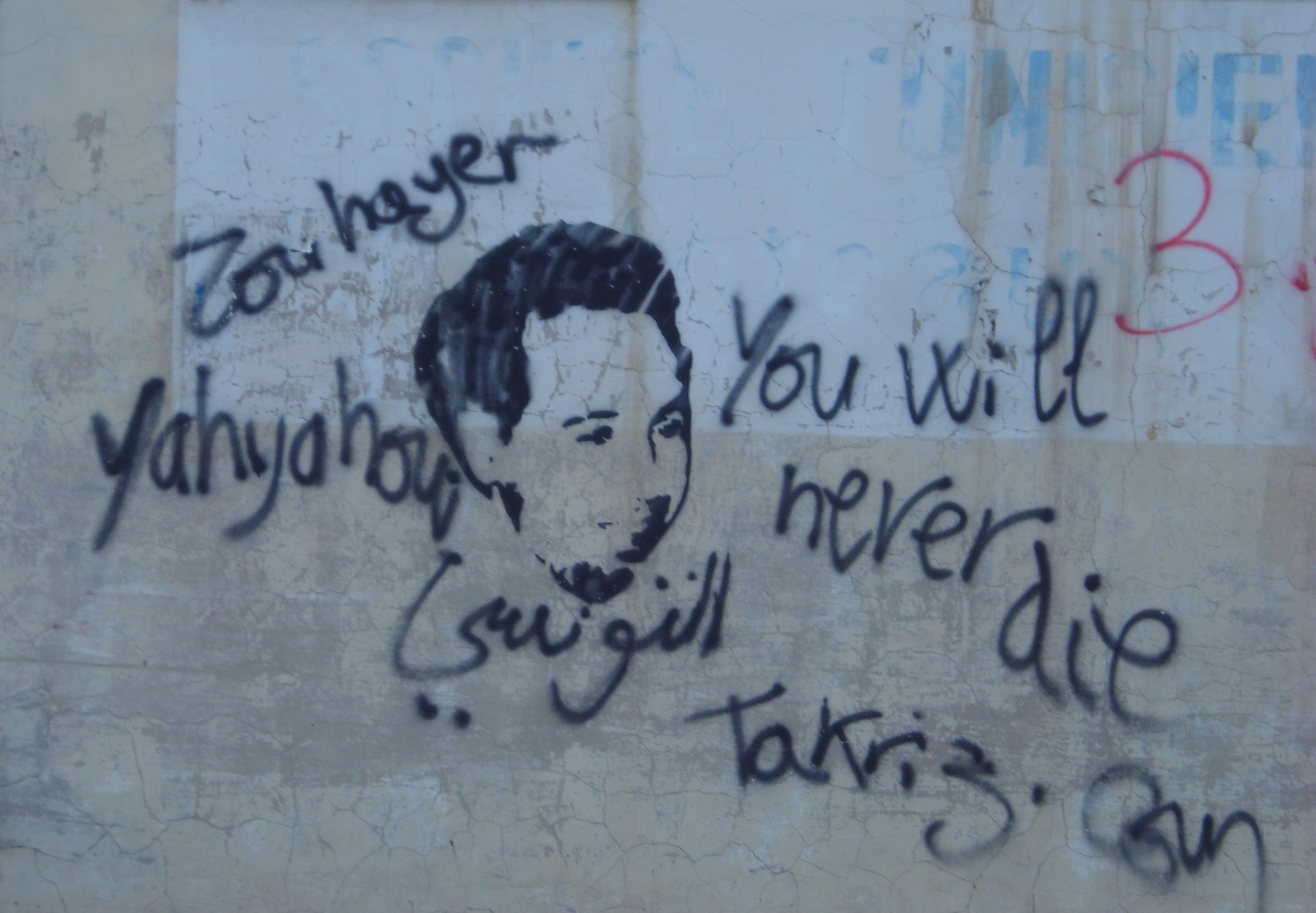 Graffiti in memory of cyber-dissident Zouhair Yahyaoui, who was jailed and tortured for running a satirical blog critical of the Ben Ali dictatorship. Photo by Yamen via Wikimedia Commons (CC BY-SA 3.0)

His story, and those of many others, are now being brought to the fore as part of a series of public hearings on human rights violations that took place during the rule of Zine El-Abidine Ben Ali, who governed Tunisia with an iron fist for 23 years before his ousting in January 2011.

Bloggers, activists and relatives of those who were subjected to abuses by the Ben Ali regime for expressing themselves online or accessing banned content, testified about the dictatorship’s violations against freedom of expression and the right to privacy on the internet before Tunisia's Truth and Dignity Commission.

As part of Tunisia's democratic reforms and transitional justice processes, the Truth and Dignity Commission (IVD) was established in December 2013, with the purpose of investigating crimes and abuses dating back to July 1955—just after the country gained autonomy from France—to help build democracy, dismantle the authoritarian system, and end impunity for past crimes and violations.

The authority, which is investigating more than 50,000 complaints, decided to hold public hearings for a number of cases that are of public interest, such as testimonies by women and women’s rights activists, families of protesters killed during the 2010-2011 uprising, those injured during the same uprising, and victims of forced military recruitment. More than 11,000 of the complaints received by the commission relate to violations of freedom of speech, both on and offline.

The president of the Truth and Dignity Commission, Sihem Ben Sedrine, herself a victim of Ben Ali’s cyber-police, began the session by describing Ben Ali’s information control system which earned Tunisia the title of an “enemy of the internet”:

The repressive system had enormous technical, financial and human means, but also an important network that included the presidency, the ministry of interior, the external communication agency [the Ben Ali regime’s main propaganda agency, now dissolved], the former ruling party with all its branches specialized in monitoring activists’ online content…

In the early 2000s, Ben Ali's repressive system went after Zouhair Yahyaoui, who blogged behind the pen name Ettounsi (The Tunisian), before Tunisian authorities arrested and jailed him. Yahyaoui, a pioneer of cyber-dissidence, founded the TUNeZINE satirical forum in 2001, where he asked his readers to vote on whether Tunisia was a “republic, a kingdom, a zoo or a prison.”

On 4 June 2002, police officers in plainclothes arrested him in a cybercafe, and for four days after his arrest his whereabouts remained unknown. He was later tried and sentenced to two years and four months for “publishing false news.” His sentence was reduced to two years on appeal. 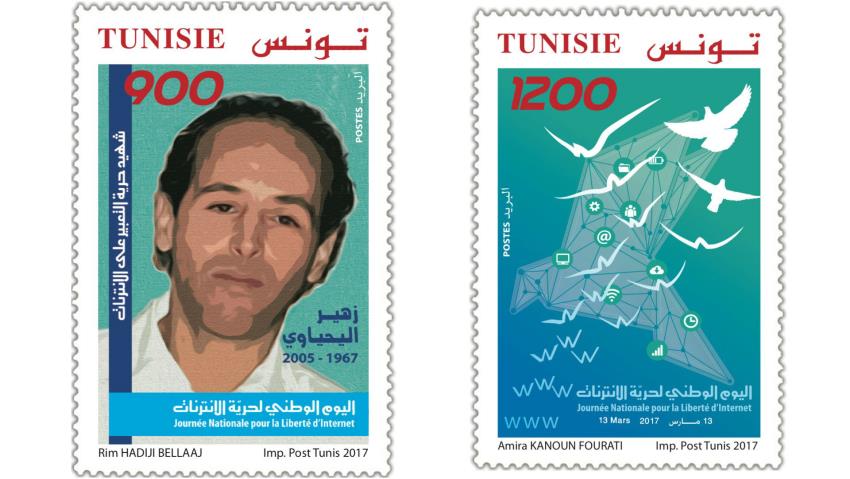 In celebration of the National Internet Freedom Day on 13 March, the Tunisian Post issued two stamps: the first commemorating Zouhair Yahyaoui, while the second is in recognition of the efforts towards a free and open internet in Tunisia.

In a video testimony, journalist Taieb Moalla told listeners: “I can tell you about Zouhair the victim, but as I knew him he would like to be remembered as a courageous dissident, [for] his satirical writings that weakened the image of Ben Ali.”

For Moalla, who was a friend of Yahyaoui's, the blogger “played a very important role in the Tunisian revolution even though it took place 5 years after his tragic death.” “To those who tortured him, we say that we will not forgive,” he said.

Zouhair’s mother Khadija Yahyaoui also testified about the life of her activist son, and about what he and her entire family were subjected to in government retaliation for her son's activism. “My son was writing only about the truth of what Tunisians were facing, the day he decided to go public and started his blog, he got arrested,” she said. “For a long period, the authorities declined to give us any information about my son….we thought he died in jail! ….all of us were under surveillance.”

Zouhair was released on parole in November 2003. His health was weakened by torture, poor prison conditions, and the several hunger strikes he went on to protest his imprisonment. On 13 March 2005 he died of a heart attack at 37 years of age. “ I’d like to see those who tortured him tell us the truth, then ask us for forgiveness,” Yahyaoui’s mother said at the end of her testimony.

At the beginning, cyber-censorship in Tunisia was about blocking domain names of blogs like TUNeZINE, Kalima, Nawaat, and so on… then it evolved to keyword censorship, to finally hacking of email accounts and websites, starting from 2008, and through use of Deep Packets Inspection technologies after 2009.

Ben Gharbia, who spent 13 years in forced exile in the Netherlands, also mentioned how the Ben Ali system paid hackers to hack websites of political opponents, human rights defenders and delete their archives. As cyber-dissidents started publishing investigative reports on corruption in the family circles of Ben Ali, on Youtube, DailyMotion, Facebook and Twitter, those platforms were soon to subjected to censorship. Youtube and DailyMotion were entirely blocked until January 2011 in Tunisia, while for Facebook the regime mainly chose to target specific pages and accounts, though the site was blocked for 16 days in 2008.

In his last speech as Tunisia’s president in the evening of 13 January, Ben Ali attempted to appease angry protesters by promising democratic reforms including an end to internet censorship. That night, users in the country were able to access sites like YouTube and DailyMotion without the need to use circumvention tools.

But for Ben Gharbia and other net freedom advocates in Tunisia “it wasn’t Ben Ali who gave back our online freedom of expression,” but rather the reforms that came after, including those initiated by the Tunisian Internet Agency under the leadership of its former CEO Moez Chakchouk. Established in 1996 with the purpose of managing and operating the national Internet Exchange Point (IXP), the Tunisian Internet Agency was required by the Ben Ali regime to host and operate internet censorship and surveillance equipment and software.

Since 2011, the agency has adopted reforms in favor of an open and free internet by taking steps toward more transparency and fighting censorship, most notably challenging and winning a court decision to filter pornography in 2012.

Post-revolution Tunisia further enshrined the principles of freedom of information and expression on the internet, through its new constitution and its adoption of UN Human Rights Council Resolutions promoting and protecting human rights online in 2014 and 2016. But in this new era, attempts to limit online freedoms are still there.

Justified by the several terrorist attacks the country faced, the government in 2013 established new spying agencies, such as the Technical telecommunications agency (ATT), tasked with investigating “ICT crimes” without proper oversight and transparency mechanisms that would ensure protection of user rights.

Today, the internet remains uncensored in Tunisia, and while filtering and blocking of websites and content may not be a concern to users, activists remain wary of surveillance practices. Tunisia is now in need of “a better enforcement of the right to privacy,” and this “obliges us to remain vigilant of the return of old practices of arbitrary cyber surveillance especially as those who work in this agency are, in part, former employees of Ammar404,” Ben Gharbia said, referring to the nickname Tunisian netizens gave to the country’s internet censorship and surveillance apparatus, in reference to the infamous “404 not found” error message that appears when users attempt to access blocked content.

It remains unclear whether and how Tunisia’s transitional justice process will impact future internet freedom policies, but there is no doubt that the public hearing session of 11 March was historic. For a country once described as an “internet enemy”, acknowledging its abusive past is the first step toward genuine reform, even if challenges remain.