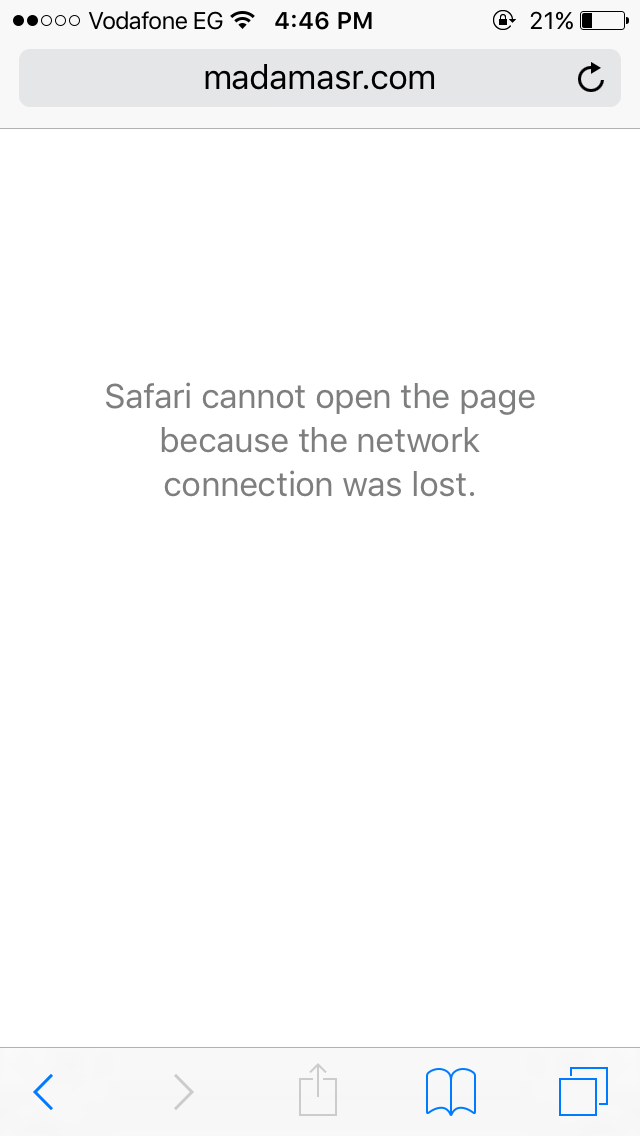 A screenshot from the result of Mada Masr website accessed from Egypt.

An “independent and progressive” news outlet that covers a variety of topics including politics, culture and the economy, Mada Masr routinely published stories of critical interest to the public that are seldom reported by other outlets. They have covered the ongoing crackdown on activists and journalists, attacks on Egypt's Coptic minority and the plight of refugees in Egypt.

As of 25 May, users inside Egypt were unable to access the website on the networks of most local Internet service providers. State-run news agency Al-Ahram stated that 21 news websites were banned in Egypt for “supporting terrorism and spreading lies,” according to a high-level security source quoted by the agency. These websites include the Arabic-language edition of Huffington Post and website of the Qatar-based Aljazeera network. 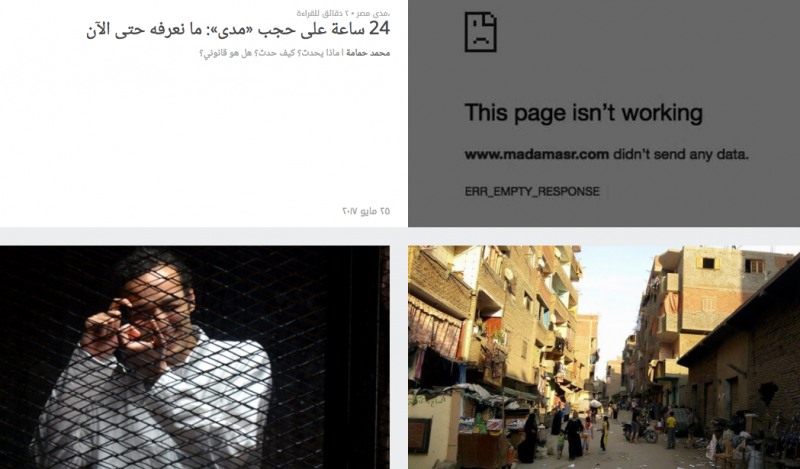 The type of communication blockage used to interrupt Mada Masr is known as a RST injection attack. According to a note from their editors posted on Facebook, this technique uses a third party to monitor and interfere with Internet traffic moving to and from the target website.

While websites have been blocked in Egypt before, this marks the first time the government has publicly announced their decision to do so.

Is this kind of censorship legal?

Under the patronage of President Abdelfattah El Sisi, Egypt has taken great measures to curb dissent, through targeting of individual journalists and online activists, and by imposing pro-government media policies. And while officials did not give the Mada Masr team a precise explanation of the blocking, the legality of this act remains in question.

In consultation with Mada Masr, technology and human rights researcher at the Egyptian Initiative for Personal Rights, Amr Gharbeia, explained that restrictions on websites can be legally enforced in two ways, either by an order issued by a high authority or by enforcing anti-terrorism law. The first mechanism can be implemented through a decree by a prosecutor, an investigating judge or by the president during a state of emergency (which is currently in place in Egypt). The second can be applied using Article 29 of Egypt's anti-terrorism law, which prescribes a five-year prison term for anyone who “establishes a telecommunications or internet site to promote ideas or beliefs that encourage committing terrorist acts or to broadcast [information] to mislead security agencies or influence the course of justice with regard to a crime of terrorism.”

However, as Mada Masr was not officially informed of any legal measures being taken against them, Gharbeia speculates that the government may have asked Internet service providers to block the website extrajudicially. With this presumption at hand, Mada Masr said in their Facebook note:

If that is the case, there are two violations, according to Gharbeia: one against freedom of expression and one against the sovereignty of law.

This most recent crackdown on an already-muzzled press will unquestionably leave independent media outlets and anyone who voices criticism against Sisi even more vulnerable than before, all supposedly in the interest of national security.

the main focus now is to try and get the site back up online without it being blocked easily, but in the long run I don’t really know what this kind of fight means for our survival. My gut feeling is that this is not the end, and there’s a way to carry on. But I don’t know how exactly this will happen yet.

Despite the tense situation, Mada Masr says that it will continue publishing on its website, and via Facebook. Journalist Jack Shenker praised Mada's vision, while tweeting a screenshot of their statement:

Statement from #Egypt‘s fearless @MadaMasr – one of the last bastions of independent journalism in #Sisi‘s dictatorship, blocked overnight pic.twitter.com/PjG6aR0nzL

Join Mada Masr page on Facebook after being blocked by the enemies of enlightenment, freedom and democracy. One of the most professional and credible websites.”

Meanwhile, public life in Egypt continues to be fraught with incidents of violence and conflict. On May 26, gunmen attacked a bus killing 25 Egyptian Coptic Christians. The Sisi regime in response launched an attack on the Libyan town of Derna, reasoning that it is home to terrorist organizations. In a moment like this, and in the persistent turmoil that many Egyptians face each day, free and independent media that cover events in the public interest — not in the interests of politicians — is more important than ever.

Algeria  22 May 2020
END_OF_DOCUMENT_TOKEN_TO_BE_REPLACED
Cancel this reply