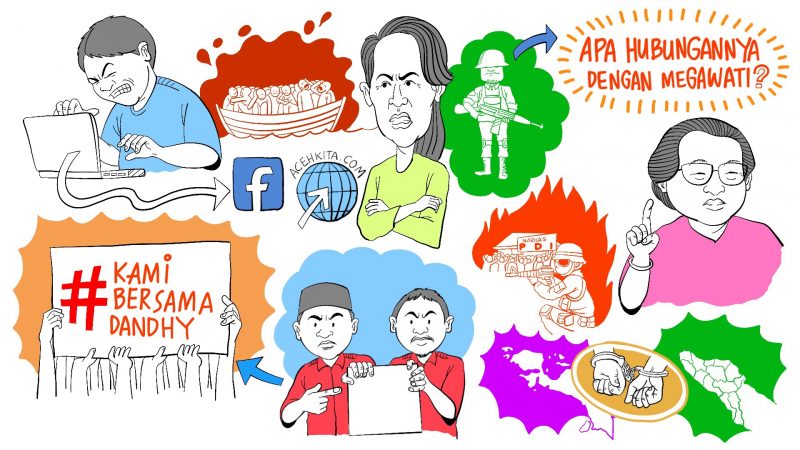 Cartoon in support of Dandhy Dwi Laksono, drawn by Iwan Sketsa/ @Sketsagram on Twitter and Instagram. Published with artist's permission.

On September 3, 2017, journalist and documentary filmmaker Dandhy Dwi Laksono wrote on Facebook that Megawati and Suu Kyi are alike in many ways, noting that both are former opposition leaders who now head the ruling parties in their respective countries. Dandhy added that if Myanmar’s government is being criticized for its treatment of ethnic Rohingya, the Indonesian government should similarly be held liable for suppressing the independence movement on the Indonesian island of West Papua.

He further compared Suu Kyi’s silence on the persecution of the Rohingya to Megawati’s role as party leader of the government, which has recently intensified the crackdown on West Papuan independence activists.

Rohingya people born and living in Myanmar are not recognized as citizens by the Myanmar government. In recent weeks, hundreds of thousands of Rohingya civilians have been displaced from their homes due to clearing operations of the Myanmar military in response to attacks by a pro-Rohingya insurgent group in northwest Myanmar. Tens of thousands of Rohingya refugees, who are mostly Muslim, are crossing into Bangladesh to escape the fighting.

West Papua is a province of Indonesia with a vocal independence movement that has called for the creation of a separate state since the 1960s. Human rights groups have documented many cases of abuse committed by Indonesian state forces against activists, journalists, and other individuals suspected of supporting the independence movement.

Dandhy posted his comments on Facebook following a big rally was organized by Muslim groups in Indonesia, condemning the Myanmar government for its treatment of Rohingya refugees.

The youth arm of the ruling Indonesian Democratic Party of Struggle (PDI-P) filed a defamation complaint against Dandhy on September 6:

On the whole, (Dandhy’s) opinion was clearly intended to take advantage of the Rohingya incidents in Myanmar in order to insult and spread hatred of Megawati Soekarnoputri as the chairwoman of PDI-P and Joko Widodo as the president who is backed by PDI-P.

He is now under investigation by the police cyber crime unit. If he is prosecuted for and convicted of defamation, Dandhy could face up to four years in prison.

Reacting to the complaint, Dandhy wrote that it is a minor issue compared to the injustices suffered by Papuan activists and Rohingya refugees.

The complaint is the latest case of how the Electronic Information and Transactions (ITE) Law is being used to silence dissent in the country.

According to Indonesian digital rights group SAFEnet, at least 35 activists have been charged with online defamation since its enactment in 2008. Aside from Dandhy's case, the group has documented six defamation charges involving activists and journalists in 2017.

Activists were quick to launch a campaign expressing support to Dandhy. They asserted that Dandhy was simply expressing an opinion which should be considered legitimate criticism and not a criminal act.

SAFEnet is encouraging Indonesian netizens to submit reports and testimonies about how the ITE Law is being abused to silence activists like Dandhy and suppress online free speech in general.

Instead of preventing the public from commenting on Megawati, a local investigative portal suggested that Dandhy's case could in fact trigger greater interest in the former president's legacy as a leader, including some of the issues that led to her defeat in the polls. 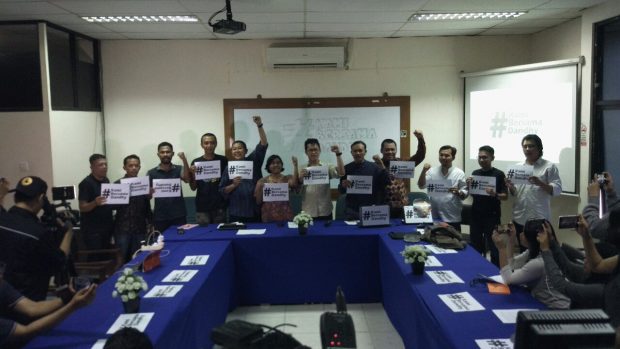 The hashtag #KamiBersamaDandhy (We Stand with Dandhy) was used on various social media platforms to call for support for the veteran journalist.

If the freedom of speech is taken away, then dumb and silent we may be led, like sheep to the slaughter #KamiBersamaDandhy @repdemjatim pic.twitter.com/0vdSIitagk