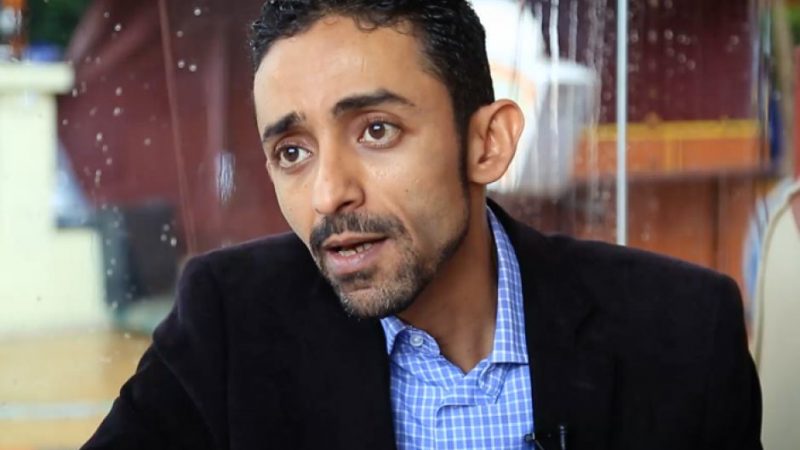 Hisham al-Omeisy. Photo handed over by his family to the GCHR. Used with permission.

It has been 150 days since Yemeni political analyst, rights activist and blogger Hisham Al-Omeisy was detained by Houthi forces.

At approximately 2:45 pm on 14 August 2017, a group of security officers from the Houthi-controlled National Security Bureau (NSB) arrested Hisham Al-Omeisy in the neighborhood of Jawlat al-Misbahi in the capital Sana’a.

According to a local journalist, Al-Omeisy was arrested for exchanging emails in English with US-based organizations. Although 150 days have passed since Al-Omeisy's arrest, he remains in an undisclosed location and has not been charged, a violation of Yemeni law and international law.

Since his arrest, he has been held incommunicado where he has no access to a lawyer nor his family. All this suggests that Al-Omeisy has become a victim of enforced disappearance, a practice many other Yemenis have been subjected to, either at the hands of Houthis or the Saudi-led coalition fighting against them.

His family members — including his wife and two young sons, Khaled and Saif — are concerned about his health and safety.

Nearly three years ago, the country plunged into an armed conflict, with Houthi forces fighting to seize power from the internationally-recognized government of President Abdrabbuh Mansour Hadi, who is supported by a Saudi-led coalition. Forces loyal to former president Ali Abdullah Saleh (who was removed from power following street protests in 2011) had fought with the Houthis, until Saleh changed his position and called for dialogue with Saudi Arabia. On 04 December, 2017, the Houthis killed Saleh.

Yemen is still in the throes of a crippling civil war and and regional conflict that has resulted in a full-blown humanitarian and health crisis, with more than one million Yemenis having contracted cholera. Advocates have documented massive human rights violations committed by all parties fighting in the ongoing civil war.

Before his detention, Hisham Al-Omeisy was outspoken about the ongoing conflict in Yemen.

Through his Twitter account and his contributions to international media, he provided commentary and analysis on Yemen’s conflict and reported on daily events including airstrikes by the Saudi-led coalition.

Saudi Co & #Yemen gov say Sana'a airport closed out of concern for safety of planes. That's codswallop, THEY ARE ONES BOMBING for 2+ years. pic.twitter.com/mPxt5XdLsI

He also denounced violations committed by the different warring parties and spoke out about the humanitarian impact of the conflict.

Prior to his 12 August arrest, he tweeted in both Arabic and English about “corrupt officials” confiscating real estate by force in the capital Sana'a, which is under Houthi control.

Armed goons backed by corrupt officials are forcefully taking real estate properties in Sana'a. They just showed up at my door. #Yemen

The arrest and detention of Hisham Al-Omeisy is another example of the harassment and targeting of human rights defenders and journalists in Yemen as they attempt to draw attention to the ongoing conflict and strive to promote and protect human rights.

The Gulf Centre for Human Rights (GCHR) expresses serious concern for the health and safety of Hisham Al-Omeisy, particularly as he is being held incommunicado in an undisclosed location. GCHR expresses further concern for the situation of all those in Yemen who are being targeted as a result of legitimately reporting on the conflict.