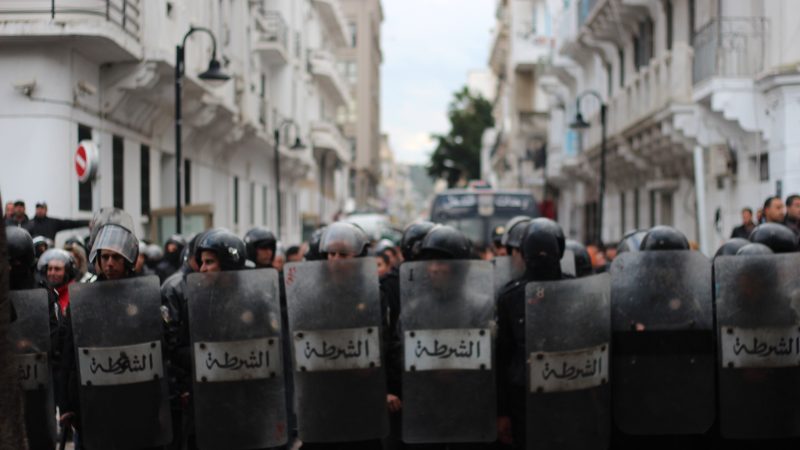 Throughout January, protesters across the country took to the streets to demonstrate against tax increases that are raising the prices on a wide range of goods and services, including phone and internet services and imported agricultural products.

The increases are the result of the 2018 budget law which introduces a 1 percentage point increase in the value-added tax and increases customs taxes. The budget also imposes new taxes such as a 1 percent social security tax on employees and companies, and a fee for every night spent at a hotel to be paid by residents.

Although most of the protests have been peaceful, some have turned violent, with acts of looting and vandalism. One protester was killed on 8 January, when a police car allegedly hit and ran over him. The government claims he died of suffocation after inhaling tear gas. Hundreds of protesters, including activists who were distributing leaflets demanding economic reforms, were arrested.

In this climate of social tension, where the role of independent media is key to dispelling misinformation and communicating the legitimate demands of protesters, the Tunisian authorities are harassing journalists and drawing criticism from rights groups. Press freedom advocacy groups including the Tunisian Journalists’ Union (SNJT), Reporters Without Borders, Amnesty International and the North African Correspondents Club have condemned the rise in attacks on journalists by police.

In its monthly report for January 2018, the Tunisian journalists’ union documented 18 cases of violations committed against journalists in the country over the course of the month. The violations, which included assaults, detentions and equipment confiscation, were mostly attempts by security forces to control the free flow of information by hindering the work of the media. The report found that together, security officers and members of security unions were responsible for 11 of the 18 violations documented.

Journalists questioned and put under surveillance

The union and other rights groups documented several cases of police detaining and questioning journalists in relation to their coverage of the protests. Shortly after the start of the unrest, Tunisian police questioned two French journalists, Michel Picard and Mathieu Galtier. Picard, a freelance journalist, was briefly detained on 14 January while covering President Beji Caid Essebsi’s visit to a working class neighborhood in the capital Tunis. Police asked him if he was working with other reporters, photographers or cameramen.

Galtier, a reporter for the French daily newspaper Libération was questioned for an hour by police officers on 11 January who asked him about the names of his sources in Tebourba, a town 30 km from the capital where the unrest turned violent and led to the death of one protester.

On 7 January, police detained Nadim Bou Amoud, a reporter for Tunis Review, seized his camera and smartphone and deleted from his devices all content related to that day’s protests. Two other journalists, Borhen Yahyaoui from radio Mosaique FM and Ahmed Rezgui from radio Shems FM, had their phones briefly confiscated by a police officer while they were covering a protest in Kasserine.

In addition to detentions, questioning and threats, journalists are also complaining of illegal surveillance practices. The union received several complaints from journalists about “the return of police surveillance of their homes, places of work and their movements.” These allegations have not been denied by the authorities. In fact, during a 29 January hearing at the parliament’s security and defense commission, interior minister Lotfi Brahem admitted to the wiretapping of the phone of Galtier, the Libération reporter, because he was allegedly in contact with “vandals.” On Twitter, the journalist denied this, saying he only talked to people on the ground in Tebourba.

These multiple attacks on press freedom prompted Tunisian journalists to take to the streets in a “day of anger” on 2 February to protest what the union describes as a “systemic policy targeting journalists to subjugate and silence them,” and to hinder them from “communicating information, exposing the truth, and documenting the government's violations against citizens’ rights to peaceful protest.”

The union’s chief, Neji Bghouri, also addressed an open letter to President of the Republic, the Prime Minister, and head of the parliament, calling on them to take concrete action to stop the escalating police violence against reporters, and to put an end to government policies that put at risk the democratic process. The syndicate also intends to complain to the UN Special Rapporteur on the promotion and protection of the right to freedom of opinion and expression about the current situation and invite him to Tunisia to conduct an investigation.

In response, government officials reiterated commitments to press freedom and freedom of expression. Three days after the “day of anger,” President Essbesi received the union’s board members and renewed his commitment to the protection of freedom of information and journalists’ safety. But this rang hollow as Essbesi had described the press in Tunisia as being “too free” at a press conference several days prior.

In a meeting with the head of the union, Prime Minister Youssef Chahed said that unhindered freedom of information is vitally important to the country’s democratic process, and that his government is committed to honouring its commitments to press freedom. The parliament’s security and defense commission jointly with the rights and freedoms commission will hear representatives of the journalists and security forces unions’ to collect their recommendations for a respectful work relation between police and the media.

Despite its reiterated commitments to press freedom, the Tunisian government's actions (and inaction) have helped to create the current situation. When the protests erupted, instead of addressing the root cause of public concern, a number of government officials chose to attack the media. President Essebsi has accused foreign media and journalists of “tarnishing the image of the country” in their coverage of the protests. The country’s foreign minister made a similar statement about foreign media’s “non-professional” coverage of the protests.

In addition, the interior minister threatened to prosecute anyone who casts doubts [on social networks] on the security forces, and called for a legal framework to protect the security and armed forces from the ”physical threats they face,” but offered no resolution to the assaults and threats journalists are subjected to at the hands of security forces.

In fact, the interior ministry is pushing for a draft law “on the protection of the security forces” that would restrict press freedom, speech and assembly by criminalizing speech deemed “denigrating” towards the police.

Calls for jobs, social justice and freedoms were at the heart of the Tunisian uprising that toppled the regime of Zine El Abidine Ben Ali more than seven years ago. While the country has achieved progress in terms of freedoms, in particular in the areas of free speech and press freedom, the economic situation remains so dire that nearly 1500 social protests were documented throughout the country in January 2018 alone.

A repressive security response that treats protesters as criminals and doubts the motivations behind their demands places journalists at a delicate situation where they are treated with suspicion — and attacked and threatened as a result — whenever they challenge the government’s narrative, shed light on security forces’ violations or give voice to those protesting.