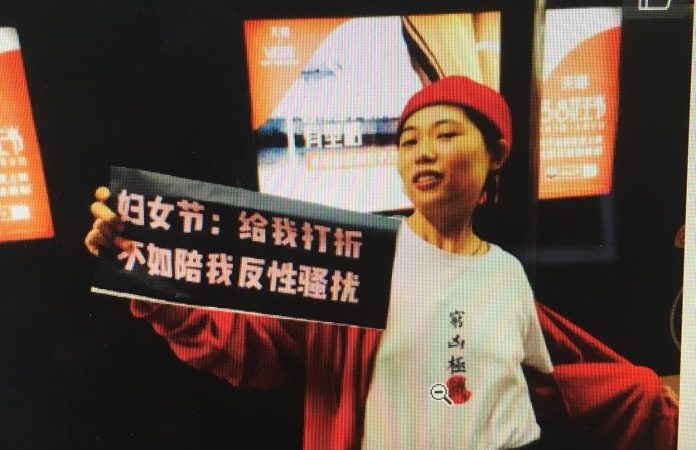 A photo posted by Lu Pin on her personal Weibo account. The sign reads: “Women’s day: Instead of giving me a discount, why don’t you fight sexual harassment with me?”

This post was written by Catherine Lai and originally published in Hong Kong Free Press (HKFP) on March 9, 2018. The version below is published on Global Voices as part of a partnership agreement.

The Feminist Voices account on Sina Weibo, one of China’s most popular social media platforms, received a notice saying it was suspended due to “irregularities” late on Thursday evening.

Prior to its suspension, Feminist Voices had more than 180,000 followers on the microblogging platform and was one of the most popular feminist advocacy platforms in China. It often posted articles related to feminism and rallied followers to support related causes. The account was also suspended on International Women’s Day last year, but administrators were later able to reactivate it.

The account’s founding editor Lu Pin told HKFP that their team called Sina Weibo on March 9, Friday morning to ask about the suspension:

They said it was because we distributed sensitive content that was in violation of regulations…But they didn’t tell us exactly which content it was… and they said they could not reactivate the account for us.

Lu added that they were appealing to Sina Weibo to get the account back online.

Feminist Voices had launched a campaign against sexual harassment on March 6. It asked users to post photos and a pledge to combat sexual harassment with the hashtag #March8againstharassment. The account had been reposting the responses in the run-up to the women’s day event.

It also posted content criticising corporate advertisements that it said were discriminatory, and hit out at the commercialisation of women’s day and sexist campus banners.

During the 2018 Women's Day, FeministVoices encouraged people to announce their “anti- sexual harassment declaration” to echo the #MeToo campaigns. We was also criticizing both corporate-funded advertisements and campus-based misogynist slogans that sexuality Women's Day.

Lu told HKFP she did not think the topic of feminism was particularly sensitive, but its large followership may have attracted Sina Weibo’s censors:

Our topic isn’t really related to the core of politics, but we have a big power to rally supporters… so that might be the problem, because a lot of people follow us.

Last year in February, the account was suspended when administrators posted a message about the advocacy of women’s strike, Day without a Woman, in the United States, but they were able to later reactivate the account, Lu said.

Prominent feminist activist Ye Haiyan posted her reaction to the account being blocked on Sina Weibo:

It is unclear whether the ban on the account originated from the Chinese authorities or whether it was undertaken by censors at Sina Weibo.

Chinese authorities arrested five feminists in 2015 for their plans to commemorate International Women’s Day by handing out stickers to combat sexual harassment. Since the #MeToo movement launched last year, censors have deleted hundreds of social media posts featuring the hashtag #MeTooInChina and closed topic forums on the subject.

The Feminist Voices account remains blocked at this time. HKFP has reached out to Sina Weibo for comment.

On March 9, the user account shutter has been extended to the group's WeChat public account. WeChat is the most popular social media platform in China:

Following up: The Wechat public account of Feminist Voices was also censored this morning. The trace of us has been totally erased from social media in China. We are still in shock now. This is the darkest time of Chinese feminists since 2015. @FeministChina pic.twitter.com/ZUyvY1J1RO