Social media users are trying to combat harassment in Pakistan — but will state institutions do their part? 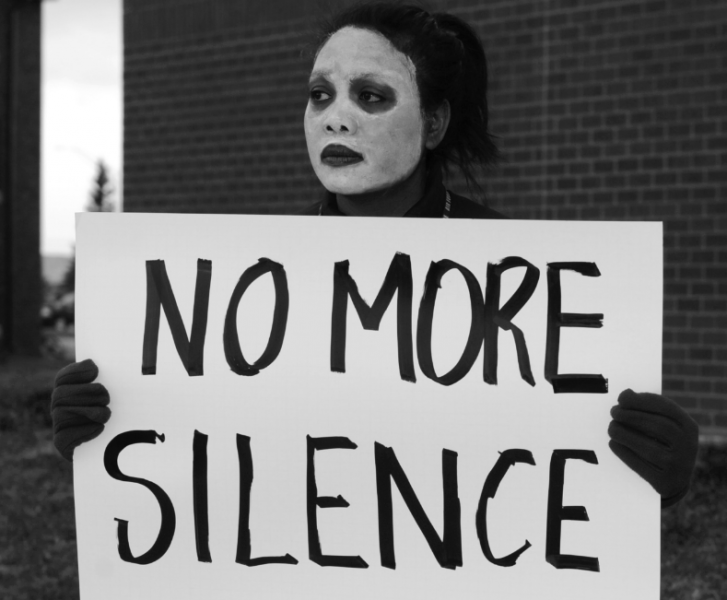 “No More Silence.” A demonstration by Eunice McFarling of the US Air Force, as part of the Sexual Assault Awareness and Prevention Month in April, 2016. Photo by Denise M. Nevins, released to public domain.

In most countries around the world, gender-based harassment is an old problem. But in the digital era, with hashtag movements such as #MeToo, and social media platforms where evidence of harassment can go viral, the balance of power between harassers and their targets appears to be shifting.

A recent example comes from Pakistan, where video showing a man following and harassing a group of women went viral on Facebook and Twitter, leading to public condemnation and ultimately to his arrest.

In 2016 in the Kalash Valley, in the Chitral region of northern Pakistan, Aimal Khan began following a group of women and filming them with his phone. He made derogatory comments towards them, and continually asked them to pose for pictures with him, despite their refusal and their threats to report him to police. Khan even claimed that he himself was a police officer.

While it is not clear when the video was made, Khan posted it on YouTube on 19 July 2016. Two years later, a Facebook page named ‘Islamabadians’ uploaded the video on the social networking website and it went viral. People started tagging the police, urging them to arrest the man. On 19 June, 2018 the Chitral Police responded saying they were trying to track his location.

In the meanwhile, another video surfaced where Aimal Khan was seen apologizing for the incident. On 22 June, he was arrested by the Chitral police, who sent women police officers to carry out the arrest. Police also clarified that Khan was not a police officer, as he had previously claimed.

Proud to see a lady constable with full traditional dress cuffing the guy who was involved in a ladies harassment case in chitral Pakistan.#womenpower #ChitralPolice #kpkpolice #GAPakistan https://t.co/N0fNQPmpTc

Aimal Khan, the person who harassed women in Kalash Valley, Chitral has been arrested by Chitral Police. Thanks to all those who stood with the marginalized women of Kalash valley and shared the vedio on social media. This is the power of social media. #stopwomenharrasment https://t.co/LXGpxQTU32

But questions were also raised, specifically in reference to the laws under which Khan was taken into custody.

Sir @ChitralPolice can I ask you a friendly question?

How was Aimal Khan arrested when there was no FIR against him by the actual victims?

Under what law? (Continued)

To the dismay of many, Aimal Khan was released on bail soon after. He is awaiting trial.

Aimal Khan was released on bail soon after as he was charged under a bailable Section of the Law. In the First Information Report Aimal Khan has been charged under Sections 354 (assaulting a female), 419 (cheating by personation), 294 (engage in obscene act in public places) and 341 (wrongful restraint) of the Pakistan Penal Code instead of Pakistan Electronic Cyber Act. His trial is to be held soon.

Activists are concerned about the laws used in the First Information Report. Although Pakistan's Prevention of Electronic Crimes Act covers harassment of this nature, and could have been brought to bear in Khan's case, the law was not passed until August 2016, after the incident in Chitral had already occurred.

Nighat Dad, a law and technology expert who runs the non-profit Digital Rights Foundation and contributes to Global Voices, explained to Global Voices that the Pakistan Penal Code in itself does not have any provisions for video-linked incidents related to harassment.

Dad also spoke about social media playing a major role in Aimal Khan’s arrest, pointing to the impact of public outcry around the matter and its likely effect on the police response. She noted that the immediate arrest sent “a good message for the masses” but that it would be up to law enforcement and judicial institutions to carry the issue forward and ensure that justice is served.

Such incidents are not new. In July 2017, Meenah Tariq of Lahore went to Hunza Valley in the Gilgit-Baltistan region of Pakistan for sightseeing. She was harassed by some young men along the way. Since she did not know of a means to lodge a complaint against them, she took their pictures and launched a social media campaign that soon went viral.

In Tariq's case, it appears that state institutions responded in a meaningful way. When Hunza Assistant Commissioner Anas Goraya learned of her experience, he set up a help line in Hunza to deal with such cases.

Tariq shared the outcome of the story on Facebook, where she described how difficult it was to share her story online — and endure the wave of harassment that followed — and the subsequent feeling of vindication she experienced after learning about the help line:

Aimal Khan's arrest following public outcry on social media is a good sign. But in this case, the question remains: will justice prevail?