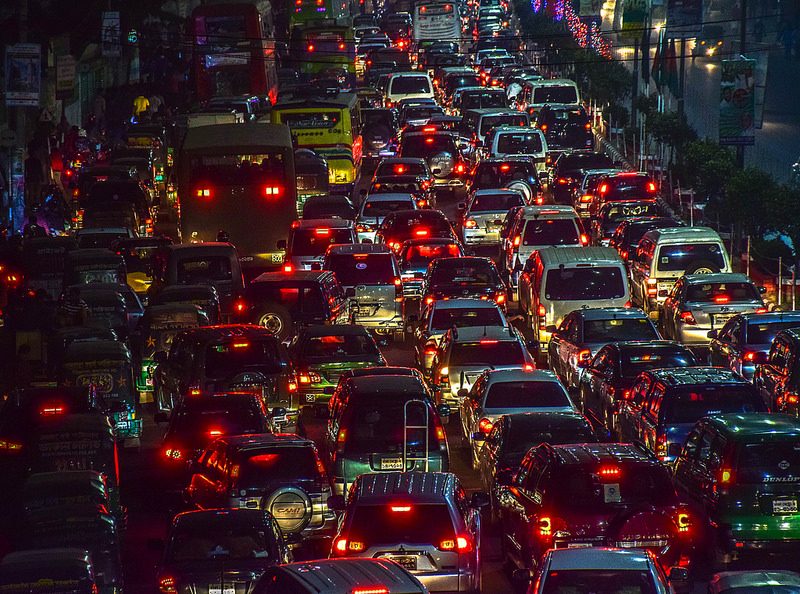 Students in Bangladesh are demanding safer roads — and directing traffic — in response to a bus collision that killed two students who were walking beside a busy road on July 29.

Protests began peacefully but turned violent on August 3 when rumors of rape and kidnapping triggered confrontations between police and protesters, with police resorting to tear gas and rubber bullets.

The rumors primarily traveled through WhatsApp groups and coincided with infiltration of protesters by the Bangladesh Chhatra League, the youth arm of Bangladesh’s ruling Awami League party.

At the same time, the Telecommunication Regulatory Commission ordered service providers to reduce mobile phone network signals so that only 2G networks were operational. This did not cut off messaging services, but it also made it impossible to share multimedia and live video, which many protesters were using in an attempt to show what actually was happening and to debunk false claims.

Among those who were sharing video online was photojournalist Shahidul Alam, who was covering the protests on Facebook Live. On August 5, plainclothes police officers abducted and later arrested Shahidul. He was beaten while in police custody and later hospitalized.

In Venezuela, journalists are under pressure, news sites are blocked and newsprint keeps disappearing

A deafening boom that interrupted a speech by Venezuelan president Nicolas Maduro has become the latest cause for media suppression in the country. Multiple mainstream media outlets have since reported that the sound and subsequent panic was caused by a drone carrying explosives, in what may have been at attempt to assassinate Maduro. But local accounts of the details of the incident contradict one another. Journalists have paid a heavy price for trying to find out what really happened — 11 reporters have since been arrested and forced to destroy photos and video taken at the event.

One of Venezuela’s most popular independent news sites, El Pitazo (The Whistle), was taken down for the third time in 11 months. The site is no longer accessible on any of Venezuela’s major internet service provider networks, and its owners have received no notification regarding the ban from telecommunications regulators. The news outlet has created multiple alternate domains in previous instances, but these too have been blocked.

Meanwhile, news outlets that produce print versions are struggling with chronic shortages of newsprint in the country. Caracas Chronicles blog reports that 40 newspapers have discontinued their print editions since 2013. And these days, even pro-government newspapers are finding themselves short on paper.

The Telecommunication Company of Iran (TCI) changed the routing or pathway of internet protocol addresses for the Telegram messaging app for one hour on July 30. The change sent users’ traffic to the TCI instead of to Telegram’s servers, rendering the app unusable, even when users employed censorship circumvention tools such as virtual private networks.

Malaysian lawyer arrested for questioning monarchy on her blog

Malaysia’s newly-elected government made big promises to overhaul the country’s outdated and authoritarian laws affecting free speech, but these have yet to come to fruition. While there have been some improvements — news sites like Sarawak Report have been unblocked, and sedition charges against popular cartoonist Zunar have been dropped — old habits die hard. Lawyer and activist Fadiah Nadwa Fikri was summoned by the police in late July for questioning the role of monarchy in politics on her blog. Fadiah is now under probe for posting allegedly seditious online content.

Alongside Kenya, India, Mexico, the US and dozens of other countries, social media bots and influencers-for-hire are increasingly a necessity for Indonesian political parties. In late July, The Guardian reported that bots and fake accounts were used to influence voters in the 2017 Jakarta Gubernatorial Election. Influencers used a range of tactics, from repurposing  articles to discredit opponents, to fabricating positive coverage of their candidate, to innocent posts talking about food and music in an effort to make accounts appear “authentic”. Research by CPIG (in Indonesian) on the issue, locally known as the “Buzzer Phenomenon”, highlighted the fact that there are no rules in place to curb such practices by political candidates.

It was revealed in March 2018 that Cambridge Analytica’s parent company, SCL group, had a hand in influencing previous elections in Indonesia. Although there is no evidence that people associated with SCL were involved in the most recent elections, the group’s approach may have had some influence on tactics that were employed this time around.

Google wants to go back to China

A report by The Intercept published on August 1 cited interviews and internal documents indicating that Google may soon launch a censored version of its search engine in China. Google left the Chinese market in March 2010 following criticism for complying with the government’s censorship regime. This hasn’t changed — if anything, it has become more stringent — but Google’s priorities apparently have.

Google has offered no specific information on the move to the public, and Chinese authorities have denied that any big changes are on the horizon. US Senators have appealed to Google CEO Sundar Pichai to re-think the move and answer several questions about the company’s intentions, citing China’s human rights record.