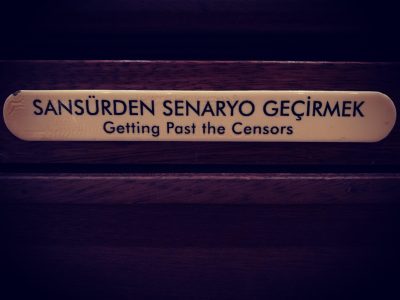 Sign displayed at the Istanbul Museum of Innocence. Photo by Filip Noubel, used with permission.

A Turkish Twitter celebrity is being sued for allegedly advocating drug consumption, and attempting to use social media to overthrow the government. The Twitter celebrity, Pınar Karagöz, claims her tweets were in fact making reference to a Netflix series.

Karagöz, who is better known online by the nickname Pucca, posted a tweet in 2018 in which she said that “hundreds of poor people are able to earn their bread by selling drugs”.

This tweet has been introduced as evidence in a court case charging Karagöz with the crime of promoting drug use which is an actual crime in Turkey . Although Karagöz said the tweet was published “for fun” in reference to the Netflix series Narcos that features Colombian drug baron Pablo Escobar, she was initially handed a 7-year jail sentence on 12 July 2019.

Upon learning of her sentencing, Karagöz published an emotional video in which she says—her voiced choked with tears—that “I've learned that I've been handed a 7-year prison sentence because of my tweet about Escobar.”

This woman was sentenced to 7 years because of a tweet that she sent as a joke.

Later, the court reduced the sentence to 5 years and 10 months in prison and a fine of over US$ 11,000. Karagöz then tweeted:

Do not watch and comment about the Escobar series here, you'll get 5-10 years imprisonment… What a great country…

As Karagöz's video started to circulate on social media, certain netizens noted that the punishment was not fair, considering the charges usually brought against serious offenders such as rapists:

I don't get it.  In the (Turkish) series drug traffickers become heroes, raped teenage children marry the person who raped them, but when she (Pucca) tweeted about Escobar, she gets seven years prison. We live in another dimension. Or are we even alive?

Yet others said she deserved the sentence because she set a “bad example” for Turkish youth.

Tens of thousands of young people have seen your drug-promoting message. If only one of them ever wondered about this poison and tried this poison, can that young person's life match the seven year prison sentence? That young person could have been your child. Now stop crying and look at what you have done from this perspective, try looking through that window.

Pucca deserves to go to jail. Who would be to blame, if just one youngster started drugs because of her. 7 years in prison for 1 young Turk is not enough.

The debate took an unexpected international turn as Pablo Escobar's son joined the debate by starting to follow Karagöz on Instagram.

As comments continue to develop, and more people take sides, the conversation around Karagöz's Tweets case has reopened a debate around censorship in today's Turkey. Some netizens have expressed the view that Karagöz's experience has reinforced their fear of writing what they think, particularly if they are critical of, or opposed to President Recep Erdoğan's policies.

I fear imprisonment now because of this tweet, goddamn, I'm just too tired

Turkey has indeed lost a number of political freedoms in recent years, as documented in scores of international country reports. The 2019 Freedom House Freedom in the World Report states that self-censorship is on the increase. According to the report:

“While not every utterance that is critical of the government will be punished, the arbitrariness of prosecutions, which often result in pretrial detention and carry the risk of lengthy prison terms, is increasingly creating an atmosphere of self-censorship.”

Clearly, the court's decision in Karagöz’s case is perceived by Turkey's social media users as a warning to think twice before expressing themselves on social media.