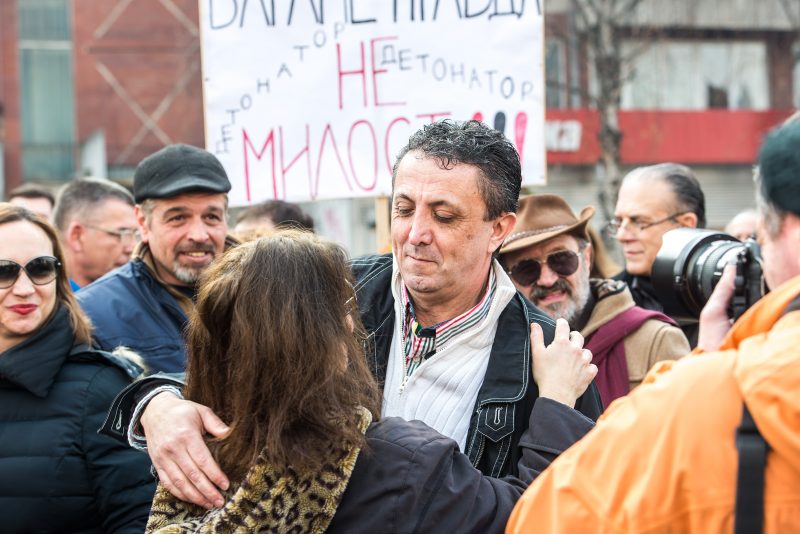 Tomislav Kezarovski at a protest in solidarity with him after his release on probation. The sign in the background reads “We want justice, not mercy!” In Skopje, 20 Jan 2015. Photo by Vančo Džambaski, CC BY-NC-SA.

This story originally appeared on Meta.mk News Agency, a project of Metamorphosis Foundation. An edited version is published below as part of a content-sharing agreement.

Due to the statute of limitations for felony of revealing the identity of a protected witness, journalist Tomislav Kezarovski will not be granted a retrial in a case that resulted in his detention and conviction on trumped-up charges.

The case dates back to 2013 when Kezarovski was arrested, put on trial and convicted for ‘endangering’ a witness over an article he wrote in 2008 about a murder that took place in 2005. However, the journalist was only arrested in May 2013, after his investigative work that raised questions about the death of a fellow journalist.

At a hearing in Skopje on 3 September, prosecutor Marija Gjorgjeva announced that the majority of the criminal acts for which the accused were pursued are a subject to a statute of limitations and denied him a retrial.

A prominent miscarriage of justice

Tomislav Kezarovski (sometimes written as Kežarovski or Kezharovski) is a Macedonian journalist whose case is one of most prominent examples of miscarriage of justice during the period of backsliding from democracy during the rule of right-wing populist party VMRO-DPMNE from 2006 to 2017. In 2013, he became famous as the only journalist in a European country (with the exception of Russia, Belarus and Turkey) to be put into prison for his writings.

The case against Kezarovski has been considered an example of the corruption of the judiciary in North Macedonia. In May 2013, while investigating the death of journalist Nikola Mladenov earlier that same year, Kezarovski was arrested and prosecuted for an article he had written in 2008, about a high-profile murder that took place in 2005.

Subsequent leaks of illegal wiretaps made by the secret service run by the cousin of then-prime minister Gruevski indicated that minister of interior Gordana Jankuloska and her deputy Ivo Kotevski were annoyed after Kezarovski published evidence ‘overlooked’ by CSI team and prosecutors that declared that Mladenov perished in a ‘mundane car accident.’ Within days SWAT team burst into Kezarovski's home and arrested him in front of his family, which sparked protests.

The journalist spent the better part of the next three years as a political prisoner, first in pre-trial detention and then in prison under poor conditions, in a cramped insect-infested cell with three other people with only basic hygiene standards, or under house arrest. In October 2013, Kezarovski was convicted for allegedly revealing the identity of a protected witness in the 2005 murder case code-named Oreshe and he was sentenced to 4.5 years in prison for allegedly endangering a witness’ life.

Professional journalists’ organizations, human rights organizations and the OSCE Representative on Freedom of the Media all condemned the arrest and prosecution of the journalist. The European Commission also addressed it within the context of a wider decline of freedom of expression in the country.

On 15 January 2015, an appeal court shortened his sentence to two years in prison. After a series of protests and legal wrangling, Kezarovski was released from prison on probation due to health reasons in January 2015. 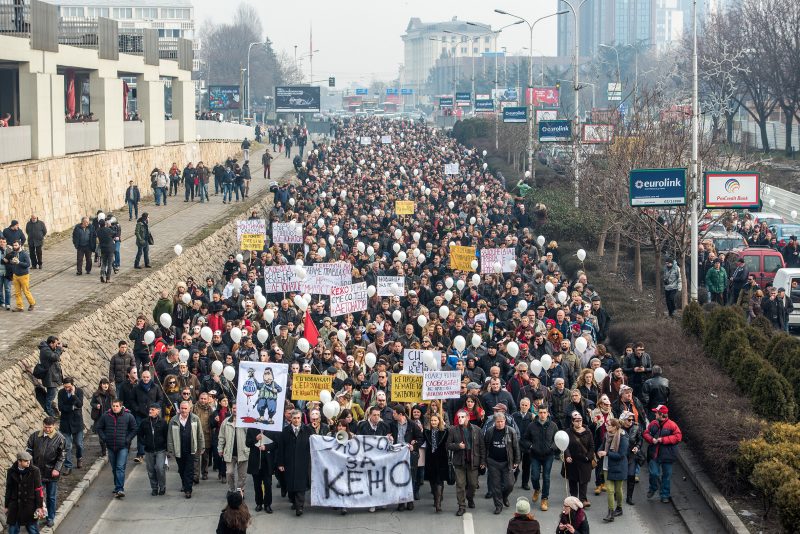 On 20 January 2015 the court allowed Kezarovski to get out of prison on health grounds at the same time of protest demanding his release was taking place. He was able to join the protesters, carrying a banner “Freedom for Kežo.” Photo by Vančo Džambaski, CC BY-NC-SA.

In October 2017, the final verdict for the 2005 murder case showed that Kezarovski's claims were true. The verdict stated that the ‘protected’ witness was neither protected nor endangered, but was a false witness who was testifying after being instructed by the police, as the journalist originally reported.

However, while this verdict gave Kezarovski moral satisfaction, he was not legally vindicated. Formally the sentence against him still stood. There was no new investigation into the death of Nikola Mladenov, which would also take into account the possible cover-up attempts including the removal of Kezarovski from his investigative work in 2013.

Instead, in May 2019 the Supreme Court annulled the sentence in the case brought up against him and ordered a retrial. The Association of Journalists of Macedonia reacted with an appeal for the withdrawal of the indictment instead of a retrial, and asked the chief prosecutor to drop the charges because it was clear that Kezarovski was wrongfully convicted.

‘I demand a chance to prove the truth’

The retrial was supposed to take place in July, but was postponed to September. At the time, Kezarovski was not happy that he would go through the whole process from the start, but at least considered it a chance to clear his name once for all.

However, at the latest hearing held on 3 September, the prosecutor invoked the statute of limitations. Kezarovski was revolted and after the hearing he said to the media (and on Facebook) that this way “he has been sentenced for life” for a second time, and that he is asking for ”a chance to prove his innocence”:

I want a chance to prove my innocence and to receive acquittal from the court, not an end of the trial on the basis of statute of limitations or leniency. I ask the court to take into consideration the evidence and determine that I have never revealed the identity of the protected witness, nor his telephone number. I demand a chance to prove the truth,” Kezarovski said in the courthouse.

In a statement to Voice of America, Kezarovski slammed the prosecutors accusing them of providing protection for all the criminal acts related to this case “in a deeply insidious way,” allowing impunity for those who ordered the abuse of justice and their “executors” henchmen. While noting that he now feels “more threatened than ever”, he also stated that he will continue fighting for the truth, and for freedom from the corrupt judiciary:

I will prove the truth, for myself, for my family and for all those people who unselfishly supported me, and still support me. I am a free man (…) and my fight for justice is, or must become, our common fight. Fight for justice is a state of mind! (…) I don't fight for my rights only, but for the rights of all others as well. We need justice! Enough is enough!

Activist Jasmina Golubovska was one of many social media users who joined Kezarovski in the outrage. She wrote on Facebook:

Tomislav Kezarovski has the right to a fair trial, as the statute of limitations expiration of this very serious case means that it would be hushed up for good!