'The concept of the Sovereign Internet is not exclusively Russian' 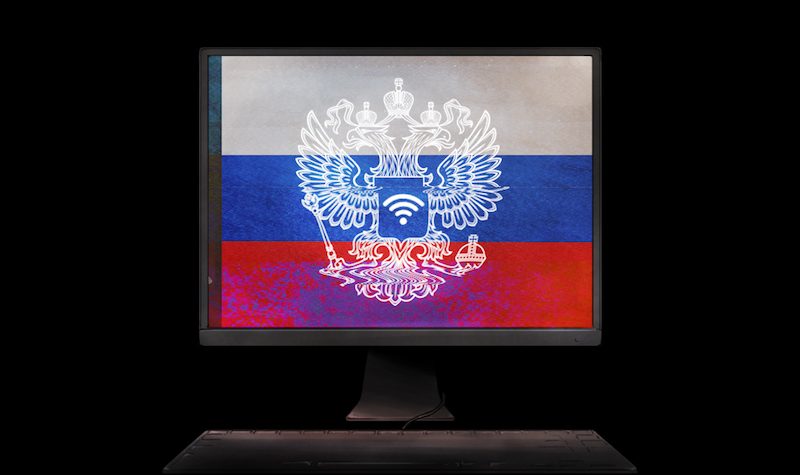 Supporters argue that the move is necessary to shield Russia against cyberattacks from abroad, while human rights and free speech defenders argue that the bill poses a dangerous new threat to freedom of expression online. For now, ordinary users of the RuNet won't sense much of a difference. At least not until a (vaguely defined) “crisis situation” is declared — in those circumstances, the Sovereign Internet would kick in, separating the internet in certain regions of Russia, or indeed the entire country, from the global network.

Russia's “sovereign internet” bill was was drafted by senators Andrey Klishas, Lyudmila Bokova, and Andrey Lugovoi, and passed by the Duma, Russia's parliament, in April. President Vladimir Putin signed it into law on May 1. This law is one of several recent moves by the Kremlin to crack down on cyberspace; this year alone has seen two seemingly politically motivated internet blackouts, in Moscow and Ingushetia. Furthermore, laws banning “fake news” and “obvious disrespect to the authorities” online came into effect in March. Putin recently suggested adding to this raft of laws by proposing a new bill to criminalise “drug propaganda” online.

As is the case with most Russian legislation of this nature (such as Russia's laws against the online promotion of “extremism”), their enforcement has been unpredictable and inconsistent — RuNet users often don't know where the red line is until they have crossed it.

So while there are already multiple laws to police content online, the Sovereign Internet plays a distinct, if related role. Namely, it's about the “critical infrastructure” of the RuNet, rather than just its content. For example, the new law obliges internet service providers to route incoming international traffic through internet exchange points (IXPs) based in Russia, ensuring the centralised operation of the internet in a crisis situation. It also obliges service providers to install special devices which would assist Roskomnadzor, the state's communications watchdog, to block undesirable internet traffic. These would send data to a central monitoring facility which could examine such traffic in real time using DPI (deep packet inspection), a method considered far more effective than blocking distinct IP addresses. The bill also calls for the creation of a domestic version of the domain name system (DNS) or the phonebook of the internet, given that in the event of an internet cutoff, Russian service providers would be unable to connect to foreign DNS servers. On September 27, Roskomnadzor announced that it would launch tests of the systems in the southern Ural region, to some local disgruntlement. The results were not made public.

But what is the political logic behind Russia's “sovereign internet”?

Putin has long seen Russia's dependence on foreign digital technology as a security threat, and stated on at least two occasions that the internet was a project created and managed by western security services. As Kirill Rogov wrote on October 29 for the Russian daily newspaper Vedomosti, social media today “mobilises and shapes political loyalty in Russia to the same degree that television did when Vladimir Putin first came to power.” In that light, recent moves to constrain online freedoms have some uncanny similarities to the state's approach to critical media outlets over the past decade. In one case, they are mirrored almost exactly: in late July, a bill was proposed to restrict foreign owners from holding more than 20 per cent of shares in any “significant” Russian online company (in 2014, an analogous law was passed concerning print, radio, and television news outlets). The move was suggested by Lev Gorelkin, a lawmaker from the ruling United Russia party, apparently acting on the orders of the presidential administration. Once the media got news of it, the stock price of Russian tech giant Yandex plummeted.

In an interview with Global Voices (GV), Andrey Soldatov, an expert on digital governance in Russia and co-author of The Red Web, a history of the Russian internet, explained the authorities’ motivation as follows:

The Kremlin’s offensive on the Internet freedoms started in 2012 and over this period they learned a few things. They understand now that the most dangerous content is not generated by some hostile forces from abroad, but inside the country, and this content is not always produced by the opposition or political activists – it might be the news of some incident, like environmental catastrophe or natural disaster, disseminated and shared by ordinary users. And the Sovereign Internet bill is designed to prevent precisely this kind of content from spreading – it requires the installation of the system which would enable the government to control remotely the way the traffic goes in the country, cutting of a particular region from the rest of the country, if necessary.

So while it is easy to portray the Sovereign Internet as a creation by an ageing elite out of touch with today's digital realities, such a view can be dangerously misleading. Moves to split the internet into more tightly-controlled national digital fiefdoms are part of a widespread global trend, and not one undertaken by autocratic governments alone. Soldatov added that the Russian government frequently points to similar moves elsewhere to buttress the legitimacy of its own policies towards the internet:

Russian lawmakers love referring to the Western experience in Internet legislation — after all, we got Internet censorship in the country under the pretext of following the British example, as we were told by the Duma. Of course, the concept of the Sovereign Internet is not exclusively Russian —apart from China, there were many European countries that started talking about the need of something sovereign, especially after Snowden’s revelations. But these days, the problem is not what the government could do about the cables and the ways the traffic goes — it’s the content and where it’s stored. In many countries there are debates over how to make global platforms store the data of users in their respective countries: German users of Facebook in Germany, French in France and so on. This could be really dangerous, especially given the fact that to store data closer to users has a practical sense to the platforms as well.

Nevertheless, Soldatov stressed that the temptation to draw parallels between Russia's “sovereign internet” and China's “great firewall” is misleading:

The Chinese model of surveillance and censorship was integrated into the Chinese Internet from the beginning, while the Russian Internet was left alone for a very long period of time: from the very beginning in the early 1990s to 2012. It makes things more difficult for the Russian censors, and the most striking difference between the two countries is that blocking isn’t effective in Russia — we have lots of websites banned and blocked, but one could use VPNs and other means to circumvent it pretty easily. The government war with Telegram messenger was also not successful — lots of people still use this messenger, including government officials.

Consequently, the highly integrated place of the RuNet within global networks could complicate the introduction of the sovereign internet. Nevertheless, Soldatov stated that as 90% of Russian internet traffic is already routed through domestic internet exchange points, the RuNet's separation could also be technically easier than envisaged:

As I said, the main idea of the Sovereign Internet is to use it during the crisis, not every day of the week. This means that if the Kremlin will be smart, they could almost avoid financial losses – the costs of introduction of such a system is a different matter.

But introducing that system could take a great deal of time and, by some estimates, several tens of billions of rubles. In fact, the law itself states that more than 30 acts need to be passed to ensure that full compliance with its multiple provisions can be reached by 2021. On October 19, presidential spokesman Dmitry Peskov even admitted in an interview that the country is not technologically prepared for full isolation, meaning that the law's provisions would have to be implemented gradually to ensure the “sovereign internet” could run smoothly. Or, we might add, to avoid the bureaucratic and scandal-ridden fate of Russia's other initiatives to regulate cyberspace, such as the so-called Yarovaya Laws on telecommunications, or the state's frustrated attempts to ban Telegram.

Read more: Despite ban, Telegram survives in Russia — but for how long?

Nevertheless, the RuNet's users are good at being one step ahead. Some websites have already prepared advice on what to do in case of the RuNet being isolated, though experts worry that activating the “kill switch” would isolate Russian users from tools such as VPNs which they currently use to evade government blocks. On social media networks, the move is either being mocked or mourned. Lev Perulkov, a member of the popular art collective MXD, has posted a series of works dedicated to the “sovereign internet” to VKontakte, which quickly went viral. Critical users have Christened in the “Cheburnet” (#Чебурнет), a portmanteau of “internet” and Cheburashka, the popular Soviet-era cartoon character.

In Russia, from today onwards, a sovereign, spiritual, and secure internet has been launched, constructed according to the principles of [the dystopian novels of famous late Soviet writer] Voinovich: nationality, party membership, religiosity, vigilance, and state security.

All Russians are requested to modify the appearance of their computers to conform with new government standards.

The Sovereign Internet, then, is designed to create a parallel digital infrastructure which can be activated at the flick of a switch. But even if that never happens, the bill's multiple demands of internet service providers could help the state more effectively enforce its growing number of laws regulating cyberspace. And in that sense, it's a sign of the times.

“The law is a formidable weapon,” said Alexander Zharov, the head of Roskomnadzor, during an interview in April. But he hoped that “like the nuclear weapons that several countries possess, it will remain in a dormant state.”