In Ethiopia’s disinformation epidemic, the crumbling ruling coalition is the elephant in the room

At least 80 people were killed in acts of communal violence 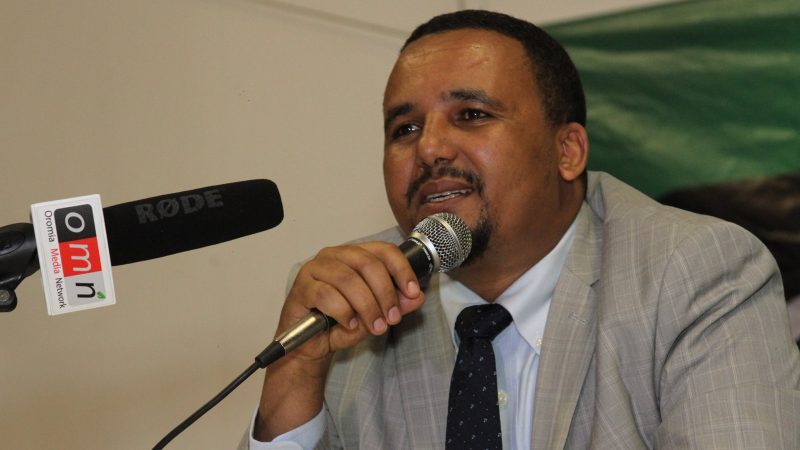 This story is the second in a two-part series on online disinformation and politics in Ethiopia. You can read the first part here.

On November 17, all except one ethnic party that comprises Ethiopia’s ruling coalition, the Ethiopian Peoples’ Revolutionary Democratic Front — the EPRDF —declared that they have agreed to merge.

Tigray People's Liberation Front, (TPLF) the most senior of the four parties, determined to reject the agreement and delay the merger, setting the stage for convulsions in the messy political transition instigated by Prime Minister Abiy Ahmed that began in April 2018.

However, the move is expected to lessen the country's ethnic divisions and violence incited by hate speech, disinformation and misinformation on social media.

The announcement comes after several universities in Ethiopia have become a focus of vicious misinformation battles among political groups following the killing, in November 2019, of two Oromo students at Woldia University, a university located in Ethiopia’s northern Amhara region:

“He checked mine and said, ‘he is Oromo.’ Then one of them hit me with a metal stick and the other one with a rock. I fell down and fainted. When I became conscious, I saw myself laying in pool of blood.” https://t.co/ILfzpRIMiv

On November 10, 2019, it was reported that an obscure fight broke out between Oromo and Amhara students at Woldia University.

Then, a swirl of rumors, spread by social media, had warned of attacks by one group of students against the other, and this set off widespread panic among students studying in universities located outside their home states.

Government authorities have pleaded for calm, and Prime Minister Abiy denounced the rumor-mongering and vowed if local authorities do not enforce the law and restore calm, the government will shut down universities.

The panic at the country’s several universities has not only underscored the deep roots of ethnic tensions in Ethiopia, where ethnic tensions are usually simplified as a conflict between Amhara versus Oromo, but also a symptom of a complex and deadly power struggle inside the EPRDF.

Since 1991, the EPRDF has been the central actor in Ethiopian politics. However, over the last two years, it has practically disappeared as a cohesive coalition, although it continues to govern the country.

The party is entangled in a deadly and incessant power struggle, mostly along ethnic lines among its four members, supporters and members of each ethnic party are taking their fight to social media.

Members of the coalition, particularly, ADP, ODP and TPLF, were openly flirting with belligerent nationalist opposition groups. They are battling each other by leaking embarrassing stories to opposition media outlets that add fuel to the ongoing misinformation.

The stories they leak are sometimes completely made up. More often, they are misleading or biased, put together to serve the purposes of these parties in their power struggle.

For instance, in October, amid rising tension, Seyoum Teshome, a prominent social media commentator, started to publish a series of dubious screengrabs of email exchanges allegedly hacked from the email account of a top TPLF member. Teshome, a strong supporter of Prime Minister Abiy, has been imprisoned two times in 2016, 2018, for unknown reasons.

The hacked emails alleged that top TPLF members were planning to incite chaos across universities in Ethiopia, in order to erode Ethiopians’ trust in Prime Minister Abiy's ability to guarantee security in the country.

On October 21, Jawar Mohammed, a prominent Oromo political activist and former ally to then-Prime Minister Abiy, wrote several Facebook updates in which he reported events that transpired around near the gate of his residence in Addis Ababa, Ethiopia’s capital.

Collectively, his posts in three different languages, Afan Oromo, Amharic and English reported a squad of federal policemen who came near his home after midnight and ordered his government-assigned protective team to pack and leave.

Since April 2018, the government has eased media restrictions, allowing once-banned leaders of opposition parties and activists back to Ethiopia, providing security details for them, including Mohammed. 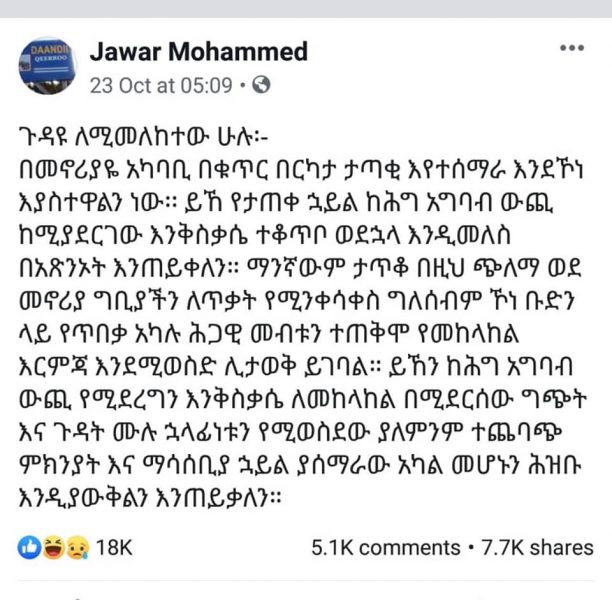 In the updates, Mohammed warned that if any of the armed men attempted to move closer, his protective team would defend themselves and if blood gets spilled, he would blame the government.

In the hours after his updates, amid concern and anticipation from both supporters and detractors, Mohammed appeared on a Facebook live stream broadcast by the Oromia Media Network (OMN) TV station, which he co-founded and currently serves as executive director. During the stream, he escalated his clash with government authorities and accused them of a plot to get him killed.

But government authorities, including Prime Minister Abiy Ahmed, denied Mohammed’s allegation, saying if they wanted him to get killed, they would not have provided him with security in the first place.

His allegations sparked off a chain of reactions that started with supporters gathering in front of his residence in Addis Ababa.

There were street protests in parts of Oromia, Ethiopia’s largest region, which in turn triggered violence at rallies, followed by what news media described as “communal violence” in the region.

In one of the deadliest episodes of Ethiopia’s numerous violence cycles, at least 86 people were killed, and several injured between October 21-23, 2019, in Oromia.

The post-violence social media circulation of images and videos shows Ethiopians have inflicted extreme violence and atrocities upon their fellow citizens that led to widespread fear and communal tension.

As violence subsided in the region, a new battle began online over interpretations and the assignation of blame.

These interpretations strained relations between mostly Amhara and Oromo elites that led to mutual name-calling fraught with disinformation and misinformation.

For them, he caused the violence by falsely alleging an assassination plot and deliberately stirring up nationalist sentiment.

Also, one of the hacked emails Seyoum Teshome published on October 25, 2019, claims that Mohammed and the TPLF were covertly working to incite violence in Oromia with the purpose of preventing the EPRDF merger.

Opponents characterized the violent incident as a massacre caused because of Mohammed's Facebook posts, a narrative that has gained widespread traction on Ethiopian Twitter under a hashtag “#October2019massacre.” They called for a tough response from Prime Minister Abiy (an Oromo), whom they routinely accuse of either being too soft on Mohammed or secretly working with him.

Mohammed's allies see the protest in Oromia as a victory that prevented an attempt on his life and hail protesters in Oromia as heroes.

They lay the blame for the deadly violence on Amhara nationalists and other opposition political parties.

Most Oromo advocates and politicians who showed solidarity with Mohammed said Oromos were waiting for the opportunity to protest, with his murder plot allegation as the last straw. In one widely shared protest video on Facebook, protesters were heard hurling insults at Abiy, calling him “Habesha”, a term popularly used to refer to Ethiopians as a whole, but Oromo nationalists use it to accuse an Oromo person who is yielding to non-Oromo interests.

Mohammed is something of a protest guru, a media executive and political strategist in his community. With nearly 1.8 million followers on Facebook, he used his page to guide street protest, raise money and solicit information from groups inside EPRDF that helped to bring down the once-dominant TPLF, which for years had blocked social media and arrested and tortured bloggers.

Even then, EPRDF was able to actively use social media to mobilize support, spread disinformation and attack opponents, including Mohammed. In fact, the true precursor for the current dizzying disinformation swirling Ethiopian social media began back in 2014.

For several years, paid online commentators tied to the EPRDF had posted comments that favored party policies and attacked opponents. The commentators were known as cocas, an Amharic expression roughly translated into English as “contemptible cadres.” The cocas apparently were hired by members of the EPRDF coalition in an attempt to manipulate public opinion.

The cocas used to unite easily around stories and memes generated by the EPRDF. For example, when Tedros Adahanom, a member of TPLF, ran for an election to lead the World Health Organization (WHO) as Director-General in 2017, he mobilized thousands of supporters on Facebook and created the impression that he has widespread support.

Likewise, Mohammed has exploited the seismic changes unfolding inside the EPRDF. On his Facebook page, he often posts and provides a punditry analysis on OMN’s Facebook live streaming service, pitching himself as a person who receives top secrets from the EPRDF. He posts with no particular schedule, sometimes several times in a day, some days not at all. His posts provide information about what he often calls the collective interest, grievances and alleged threats of the Oromo people.

OMN’s Facebook page, with 1 million followers, is one of the fastest-growing pages among Ethiopia’s media organizations.

Mohammed ranks first among Ethiopian political figures in a number of followers of his verified Facebook page of 1.8 million followers. No other Ethiopian public figure who has some political sway is even close.