Will Uganda shut down the internet as opposition heats up for 2021 elections?

During the 2016 elections, access to social media was disrupted twice 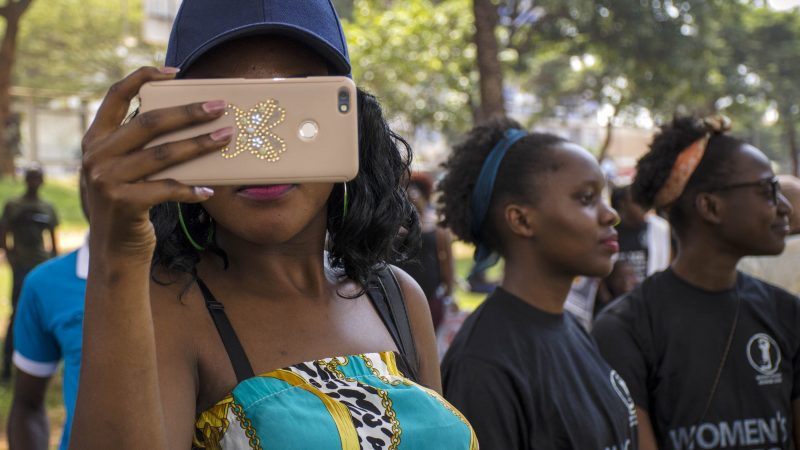 Protesters at the June 2018 Women's March in Kampala, Uganda. Photo by Katumba Badru, used with permission.

In Uganda, the internet has become a battleground where the government attempts to silence a growing online population voicing dissent.

The first shutdown took place on February 18, 2016, on the eve of the presidential election, and it affected social media platforms and mobile money services. The restrictions lasted for four full days.

On May 11, 2016, social media platforms including Facebook, WhatsApp and Twitter and mobile money transfer services were once again blocked. This shutdown lasted for one day and took place a day before President Museveni was sworn in for his fifth term as president.

Museveni has been in power since 1986. Opposition to his rule is growing: According to a public opinion poll released in April 2019, an overall majority of Ugandans opposed a 2017 decision to remove the maximum age limit of 75 to run for president, which would allow the 74-year-old to run again in the 2021 elections.

During both shutdowns in 2016, the Ugandan government cited “national security’’ as the motivation behind restrictions. The disruptions were ordered by Uganda’s security agencies and the Uganda Communications Commission (UCC), which regulates the telecommunications sector, online publications, broadcasting (both radio and television), film industry, postal and courier services.

On February 18, 2016, MTN Uganda, a telecommunications service provider, issued a statement on Twitter confirming that “UCC, the regulator had directed MTN to disable all social media and mobile money services due to a threat to public order and safety.” This also affected other telecoms companies such as Airtel, Smile, Vodafone, and Africel.

The same day, President Museveni told journalists that he ordered the blocking of social media: “Steps must be taken for security to stop so many getting in trouble, it is temporary because some people use those pathways for telling lies,” he said.

On March 17, in an official declaration during Supreme Court deliberations in which President Museveni’s 2016 victory was challenged, the UCC executive director Godfrey Mutabazi explained that “he received instructions from the Inspector General of Police, Kale Kayihura, to shut down social media networking sites and mobile money facilities owing to security concerns.”

These shutdowns interfered with the rights and daily lives of Ugandans who use the internet and social media platforms to access information, express views and conduct everyday business online. During the weeks prior to the 2016 elections, Ugandans actively tweeted and debated about the elections using hashtags like #UgandaDecides and #UGDebate16. Ugandan citizens’ level of online civic engagement was sparked by the first-ever televised presidential debates, the first of which was held in January and the second, a week later.

Even with the social media bans in place, many Ugandans continued to post about the elections using Virtual Private Networks or VPNs. On election day, citizens were able to share updates on late arrivals of voting materials at various stations, reports of election malpractice, and provisional election results on social media.

Human rights activists say that targeted shutdowns during election periods slow down communication, just when access to information and citizen expression are most needed.

“Internet shutdowns limit people from communicating particular concerns that affect them, such as health, interaction with friends as well sharing of political views and opinions,” Moses Owiny, the chief executive of the Center for Multilateral Affairs, an independent platform for policy analysis operating in Uganda and Tanzania, told Global Voices in an interview.

According to Owiny, shutdowns primarily aim to stop dissent in politics based on “perceived fear by the state that citizens’ views and concerns are likely to incite the public,” an accusation he believes is unfounded and not grounded in reality but assumptions.

On April 14, 2011, the UCC instructed ISPs to temporarily block access to Facebook and Twitter for 24 hours to eliminate connecting and sharing information. The order came in the heat of opposition-led “walk to work” protests over rising fuel and food prices. The regulator stated that security agencies requested the block to minimize social media use in order to prevent violence.

In 2011, the elections were marked with SMS filtration that contained certain words including “Egypt,” “bullet” and “people power.”

In the lead up to the 2006 elections, the UCC instructed ISPs to block access to the website of Radio Katwe for publishing “‘malicious and false information’ against the ruling National Resistance Movement and its presidential candidate,” according to a 2015 ICT policy briefing by Collaboration on International ICT Policy for East and Southern Africa (CIPESA). Ugandan authorities blocked access to the radio station and the Daily Monitor website for publishing “independently tallied election results.” Media platforms were quickly reinstated but only after the electoral commission announced official results. 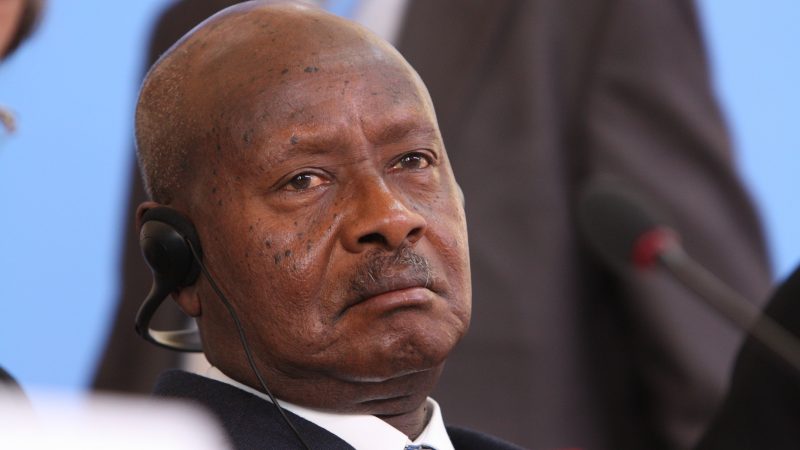 President Museveni in May 2013. He has been in power since 1986. Photo credit: Foreign and Commonwealth Office on Flickr [CC BY 2.0].

Since 2016, authorities have continued to crack down on opposition politicians and journalists.

Robert Kyagulanyi, known as “Bobi Wine,” singer and leader of the opposition party People Power, who is also a member of parliament, has already announced his bid for the presidency. Wine currently faces criminal charges for “annoying the president” and if convicted, he would not be allowed to run.

According to Human Rights Watch, in 2018 authorities targeted six opposition members including Bobi Wine and Francis Zaake, ahead of the August 15 by-elections in Arua (northern Uganda). Members of the police and military arrested the group along with 28 other people on August 13, 2018, and charged them with treason. They were later released on bail.

That same day, police also arrested two journalists, Herber Zziwa and Ronald Muwanga, as they covered the by-election and related violence, including the deadly shooting by the military of Bobi Wine’s driver.

Read more:  #FreeBobiWine: Protests mount over torture and arrest of a young political force in Uganda

As the 2021 election approaches, Uganda authorities are very likely to continue to crack down on political dissent, including through social media shutdowns. In fact, since the 2016 elections, there has been no change in the legal framework that allows the government to restrict the rights to freedom of expression and access to information online.

According to the 2016 State of Internet Freedom in Africa report,  the 2013 Communications Act gives UCC broad powers and functions under Section 5 that permits the communications regulator to “monitor, inspect, license, supervise, control, and regulate communications services” and to “set standards, monitor, and enforce compliance relating to content.” At the request of the government, the UCC used this section to order ISPs to block access to social media and mobile money services during the 2016 elections.

The government continues to weaponize these laws to control public debate and to silence political dissent, particularly at times of elections.

Nongovernmental organizations and human rights defenders have been organizing in Uganda so that shutdowns like the ones that took place in 2016 don’t happen again.

Several organizations wrote a joint letter to the African Union and regional bodies asking them to condemn the decision by Ugandan authorities to shut down internet access during the 2016 elections.

Unwanted Witness Uganda took the Ugandan state to court, along with internet service providers and the regulator, in a case filed in September 2016. The organization contended that the internet shutdown planned by the state violated the rights of Ugandans to personal freedom of speech and expression is enshrined in Article 29(1) of the 1995 constitution. However, a judge ruled that “the applicants failed to prove any violations’’ that resulted from the shutdowns, Unwanted Witness Uganda told Global Voices.

Achieving uninterrupted access to the internet — particularly during the upcoming elections — will require more advocacy.

Owiny suggested the need for digital rights activists to deepen conversations between the government and private sector to present the negative impact of shutdowns because the private sector is intimidated by the state.

Uganda was among the first African countries to enact a right to information law, known as the Access to Information Act (ATIA), in 2005. The law promises to provide “efficient, effective, transparent and accountable” that will “enable the public to effectively access and participate in decisions that affect them as citizens of the country.”

Will the government meet its mandate to promote the right to access to information? Will it live up to its promise?